Back to the Boards 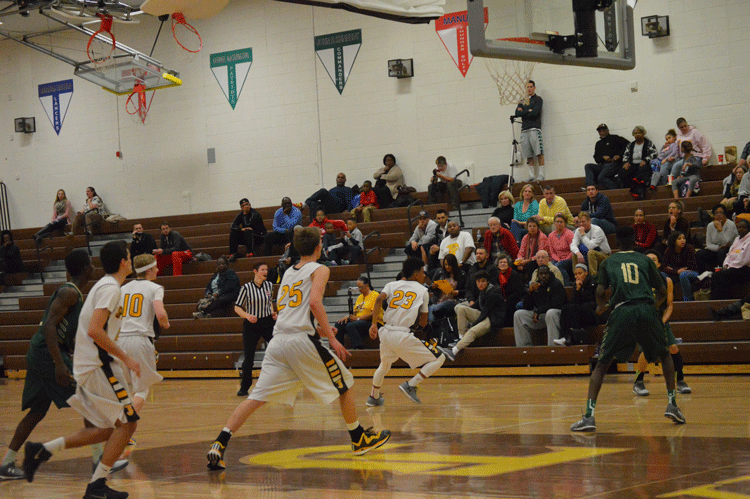 The Spartans take to the court for another promising season. photo by Corbett Tate

TJ basketball returns to the court this winter looking for another State Title.

As the Spartan boys’ basketball team comes back from a heartbreaking loss in the playoffs last season, Head Coach Grant Laman and his new batch of varsity players lace up their shoes and get ready for another promising year.

Last season, the Spartans had a record of 13-12, successfully achieving a playoff spot and going all the way to the Sweet 16, but unfortunately falling short of a victory against Golden High School with a score of 69-65. “The Golden loss was tough,” stated Laman. “We were the underdog, but I think for a lot of the game we were surprising them and were up at times, I think there were three or four points when I thought we were going to win it and three of four points when I thought we were going to lose it. It was just one of those battles; the loss was heartbreaking.”

The boys began preparation almost immediately for this season, holding workouts and practices over the summer to help the team stay conditioned. Through the off-season, the dedication and desire instantly grew as the meetings amplified more quickly. Camps and practices have, and will, always be the key focus for this team; as the season comes to a quick start, the coaching staff must make sure that all players have the correct mindset and intensity for the season. “The intensity is probably what I’m most proud of,” said Laman, “I have a bunch of guys who are going really hard right now.”

As always, TJ’s boys’ basketball has a very eager and exciting coaching staff, starting with Coach Laman. Laman is one of the most experienced basketball coaches in Denver Public Schools, having started as a JV coach for four years, followed by the last thirteen years as head coach. Laman achieved back-to-back state titles in 2005-2006. Laman is joined by assistant Varsity coaches Korey Reliford and Jeff Dolan, who have been coaching for three years and one year, respectively. JV head coach Kyler Jackson has been with the Spartans for 11 years. Finally, Kenneth Leverock has been the C-team coach for five years, and was the coach at Hamilton Middle school for a long time. Laman spoke about his coaching staff, “We have a really good crew, there are five of us and we just all support each other. We all put in several hours a day, in and out school.”  With this elite group of coaches, TJ has been able to produce many talented athletes who have gone on to play college basketball. Senior Henry Cooper, fourth-year Varsity player, and shared, “Coach Laman has benefited me a lot through practices and by communicating with college scouts, which has played an important part in my recruiting process.”

As the season begins, not only the players and coaches, but the entire school, are ready to see this team take the court with authority. The Spartans will continue their games at home on Saturday, December 5th, against Littleton.

In their first game of the season, the Spartans took on the Trojans of Aurora Central. The team jumped out to an early lead and fought hard but it wasn’t enough to hold off one of the better teams in the 5A class. “It was a hard loss, but we all know what we need to work on, it felt good to be surrounded by all these good and advanced players,” said freshman varsity player Jodaun Dotson.The Spartans were led offensively by the Cooper brothers, Henry and Xavier, with a combined 33 points. Defensively the team was led by junior  Kieran Cecil with five blocks.  TJ, a 4A class school, opened the season ranked #13 in the state and looks to make an impressive run for the playoffs and a state title this year.