A Busy Head at Busyhead 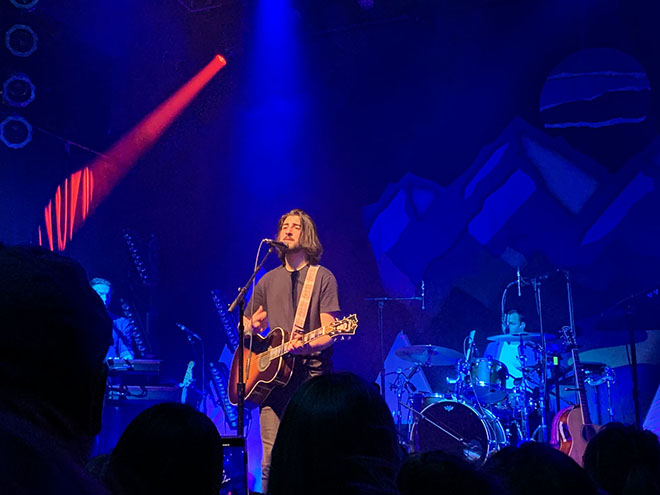 I never thought that in my 16 years of living, I would be in a room full of screaming teenage girls who enjoyed the same music I did. It all started on my 16th birthday when my mother asked me what I wanted for my birthday and I responded with the one thing that made her say “no” faster than one can say “Danny DeVito”: a concert. Specifically, Noah Kahan’s Bushyhead Tour. After cleaning four bedrooms, washing a pile of dishes, mowing the lawn and receiving a very stern glace from my father, my mother finally said yes, but the catch was that my father had to come too. I gave in; it was that or wait a number of years before my favorite artist went on tour again.

For the next couple of months I annoyingly updated my Instagram followers about who I was seeing and where, until the night of the concert. Finally, it was October 22nd, 2019, opening night. I wore a black Dwayne “The Rock” Johnson turtleneck, some white Nike Air Force ones, (happily stolen from my sister’s closet), mom jeans and my father’s jean jacket. If there is one thing you should know about the Iyema family it is that we are either super early or super late; there’s no in between. When my father and I arrived at the Gothic Theater, the line was the Amazon River, but what were we expecting? We showed up at 7:25 p.m. Did I mention the show started at 7:30? My irritation and sadness because of how late we arrived I was suddenly overpowered by anxiety, good anxiety because I realized this was my first concert and I was out enjoying myself on a school night. I was out of my comfort zone; I’d normally spend my Tuesday nights watching Grace and Frankie, writing poetry, and avoiding my family or any form of physical contact with anyone, but after 20 minutes of awkwardly standing and avoiding eye contact with everyone around me, I realized that I was only making it miserable for myself and that I needed to do the one thing I wasn’t good at: socializing.

Two bathroom breaks and three very uncomfortable conversations later, the opener, Los Angeles based singer/songwriter JP Saxe began his set. I connected on a personal level with a lot of his songs including: The Few Things, 25 in Barcelona and Same Room. When Saxe finished his set, I stood another 30 minutes until Kahan finally came out. “Marry me, Noah” were the words I screamed when the gorgeous human being with shaggy dirty brown hair entered the stage. I swear I could hear my heart beating out of my chest. The moment I had been waiting months for finally arrived and I was a bundle of emotions. I sang every song he performed. Three breakdowns, some loud screaming and some very bad dancing later, Noah took a bow and I couldn’t believe it. The show was over. No, no, no, I couldn’t accept that, so I began to chant “One! More! Song!One! More! Song!” and soon everyone around me was doing the same. I felt carefree-like wow, I really did that.

Noah came out and sang not one, but two more songs, and the night was over. Three things I took away from that night were to one: arrive at least an hour early to concerts, two: engage with the people around you, a simple “Hey how are you” can make someone’s night and spark up conversations you’d never thought you’d be having, and three: bring your parents to concerts, because you’ll walk in with them and never see them anytime during the performance. Thank you, Dad.