A New Sense of Security 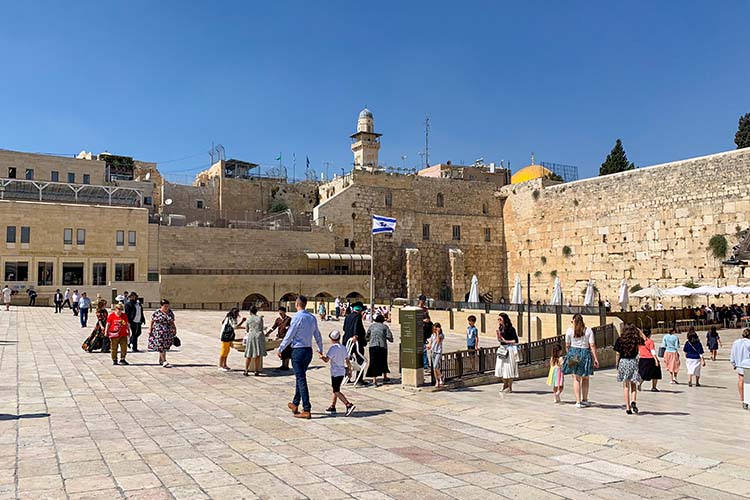 Traveling to Israel in the midst of a conflict was not what I thought it would be.

This past summer of 2021, I went on a month-long trip to Israel with 40 other Jewish teenagers. Our staff members were planning our trip during some of the most critical stages of the Palestine-Israel conflict, and due to the deadly violence circulating the country, our trip was almost canceled with no chance of it happening, even the next summer. Thankfully, on May 20th, 2021, Israel and Hamas negotiated for a ceasefire, and our trip was officially given the green light.

While checking my itinerary, I realized we were going to be travelling all around the country with no location restrictions. I was obviously frightened by the violence because we were going to be traveling in some of the most dangerous areas in the country. Yet I knew that being in my homeland, and being a part of the majority of the country for once, would make me feel the safest and most secure with my Jewish identity as possible, so I took the risk, and I have absolutely no regrets. Of course, we needed to ensure maximum safety and comfort, so my tour group had an armed guard who doubled as a trained medic with us at all times.

One day on the trip, we traveled to the Gaza border to listen to a man talk about what it’s like to live so close to Palestinian territory as an Israeli. He then took us on a tour of his property. There were about 10 bomb shelters within a mile of each other. There was even one in the middle of the road. He explained to my group that we were in the most vulnerable spot we ever could have been on that trip, but I still did not feel threatened. It baffled me that although he lived so close to the Gaza strip, he was so calm. When my group listened to him talk, it was the most quiet I had been in since the beginning of the trip when we were stuck in quarantine for two days. About a week later, we traveled to the West Bank, and we went to the one place in Palestine that Palestinians and Israelis could meet peacefully. I felt like I knew a secret that nobody else knew. While we were there, I constantly wondered what people back home would think and if they would twist this situation into something that it wasn’t.

Being in Israel as an American is definitely a culture shock. Almost everywhere you go, people have guns or different weapons, for protection. The constant sight of weapons was definitely anxiety inducing, especially because if I saw guns in the United States as much as I did in Israel, I would probably freeze due to shock and fear, but this was not the case on my trip. One afternoon, I was casually strolling down a street in a populated city in Israel when I accidentally tripped and stumbled into a random man. I felt something weird when I ran into him, so I looked down and it turns out, I walked straight into his machine gun that was strapped from his shoulders down to his mid-thigh. This guy was just walking his dog with a machine gun. My stomach dropped, and for almost every other person this would be horrifying, but then I remembered that I was in the one place in the world where I knew that anyone carrying a gun  was carrying it for protection, and they needed to be protected for the same reason I did, my religion. So I carried on as if the gun was not there. Other than that, life in Israel was basically normal, there were not many things that were out of the ordinary.

Coming back from the trip, I no longer felt like I “belonged” to something. I knew I was completely safe again, and that there was no chance of me being harmed, but I didn’t want to be safe in that form as much as I wanted to be safe with my identity. It feels extremely ignorant to say that, but I have grown up almost always being one hundred percent physically safe, and I just wanted a sense of security felt by my inside identity. Although leaving Israel was emotional, I am so grateful for my experiences and my trip, even though it was just 30 days, it changed me for the better.

Unfortunately, violence takes a large part in both Palestine and Israel. However, my hope is that soon enough, this conflict will burn out and both Palestinians and Israelis will have a feeling of safety when it comes to their identities that they have never felt before within their own environments.