Best in the Field 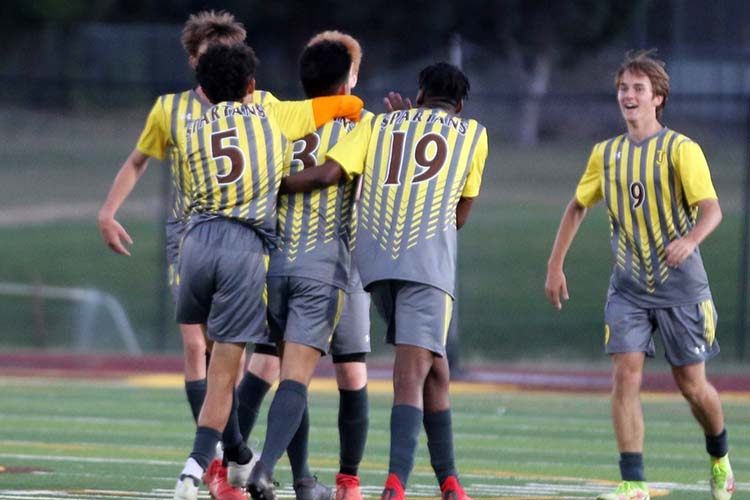 The 2021 Boys’ Soccer Team is the third boys’ soccer team at TJ to ever make it to the playoffs.

The boys’ team endured challenges throughout their season, but through perseverance they were able to make history at Thomas Jefferson High School. The team started the season with a four-game winning streak, but their victorious momentum had a setback as the team then encountered a five-game losing streak. The players were frustrated because they were working hard but losing games by only one or two points to highly competitive teams. The boys decided to not let these defeats dictate their season and started to work even harder by putting in extra time at practices and studying game films. Due to the boys’ dedication, they ended their season with an 8-7 record as they advanced to the playoffs.

The 2021 team was the third team at TJ to ever make it to the soccer playoffs. Senior captain Adam McPherson has played on the varsity team since freshman year and has been to the playoffs twice now. As a result, he was highly motivated to make it to the playoffs with this year’s team because of the overwhelming feeling of accomplishment he had, and he wanted the other boys on the team to experience the same feeling. McPherson said that the team felt like they were a part of something bigger and it was an honor to represent TJ in the first round of the playoffs. He knows that he and his teammates will be able to look back on high school and remember their soccer careers at TJ. Even though the team lost to Pueblo West High School, the boys dominated the game and did not stop until the last whistle blew. The team gained soccer skills as well as mental toughness from the opportunity of playing against a team with a different style of play. Although the team had an upsetting loss, the boys finished their season with smiles on their faces. As they traveled back from Pueblo on the team bus, they stopped to get pizza and shared their last moments of the soccer season with each other.

The commitment from each team member and coach allowed the players to grow their skills and confidence in the game. The coaches, John Thompson (OT) and his son John Thompson (JT), worked extremely hard during this year’s season. Their dedication to the team was obvious as they spent additional hours making practice plans and allowing the boys to have access to game films. The coaches also taught the boys essential soccer skills that related to life lessons. They continuously shared that the boys couldn’t just play for themselves but needed to play for the players around them. JT and OT wanted their players to give 100% of their effort in every practice and game, meaning that when they were at soccer, that should be their only focus. This taught the boys to live in the moment and the players say that they will use this tip in their future. The coaches encouraged the boys to work hard and avoid making excuses for themselves even when the season became difficult. The team was able to get the results they deserved by always giving their full effort, and the season would not have been as successful as it was without the support of JT and OT.

The boys’ season wasn’t just successful because of the hard work each team member put in, but because of the bonds they made with each other. Alex Garcia Del Rio added, “My favorite thing about this season was the brothership.” The players would go to team lunches and make plans outside of practice, that helped the team build its chemistry which became visible on the field. McPherson and Garcia Del Rio agreed that a high school team’s success is dependent on the bonds the team makes, and TJ was able to accomplish this as they formed friendships with each other outside of soccer. Senior Holden Knostman noted, “I think that the team bond will lead into next year and the following years because we’ve built friendships with each other.” Knostman and other players believe that the bond that has been built this year will continue as the boys’ soccer program at TJ grows. He added that he loves seeing his teammates in the hallways, and knows that the friendships he’s made within the soccer team will continue even after the end of the season.