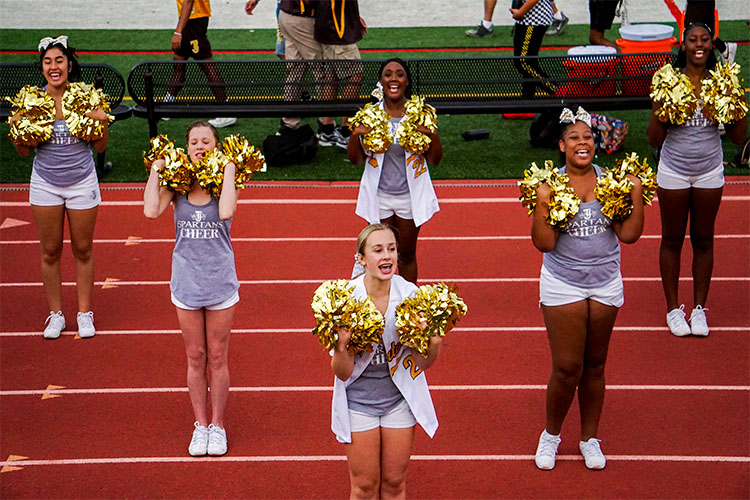 The cheerleaders work their hardest to bring spirits up in the crowd no matter the outcome of the game.

Cheer has captured the attention of the community here at TJ. Football games wouldn’t be the same without the cheeriest of students known as the cheer squad. Their upbeat cheers have left a forever footprint on the culture of TJ. These ladies work endlessly to give the best stunts and cheers to spice up all football and basketball games.

When asked about her favorite part of cheer, sophomore and cheer captain, Camdyn Beery, quickly said: “Competitions!” The squad competes in three competitions during the winter months. During the month of November, the squad competed in two competitions: Rock the Mat, on November 2nd, and the DPS League competition, on November 7th. At the Rock the Mat competition, the team scored a grand total of 63 points, which was an improvement from their score last year. Also, at this competition, they performed against many 4A and 5A schools. They showed that they can compete with those high level teams. At DPS League, the team competed against other DPS high schools and placed fifth overall.On December 6th, the cheer team will go to the state competition.

The lady Spartans work very hard to make their sideline performances unforgettable. For two hours most days, they work to fine-tune their skills. Unlike most sports, cheer takes two athletic seasons: fall and winter. However, this allows for a closer bond within the team to form. “We are such a close team and can honestly trust each other with anything,” explained junior and cheer captain, Brenda Gonzalez-Olivas.

The cheer team’s activities add to the positive impression that TJ strives for when interacting with the community. During the summer months, the ladies perform at the community festival South by Southeast. They perform alongside other TJ alumni to raise money for their program and to make TJ known in their community. In addition to this festival, the girls also host bake sales after school sometimes to raise money to help pay for their uniforms. In the second semester, the cheer squad holds a mini camp for young cheerleaders to learn how to cheer from the best. They teach young cheerleaders from ages 4 to 10 a dance routine to perform during halftime at a TJ basketball game. Although dates have not been set, the mini camp will occur sometime in the spring of 2020.

Through all of these events, the team has really bonded with each other.  Head coach and TJ alumnus Tyler Cobb attributes this bond to learning, failing, and then succeeding together. She explains, “When teams are learning to pick up new skills, the best way we come together is when we have to learn from those and struggle through them together.” Many people who are a part of the team are constantly learning and growing together, thus making their bond incredibly strong and hard to ignore.

The girls hope to see some more interest in the team next season. As Gonzalez-Olivas explained, “A lot of people have the tendency to say that they need the special things to do cheer, but in reality all you need is a smile, a great heart, and a lot of spirit.” They want everyone at any level to come tryout. Cobb reassured, “everyone has come in at a different level, so we foster variances in abilities.” Tryouts for the next season will be April 22nd-25th, 2020.