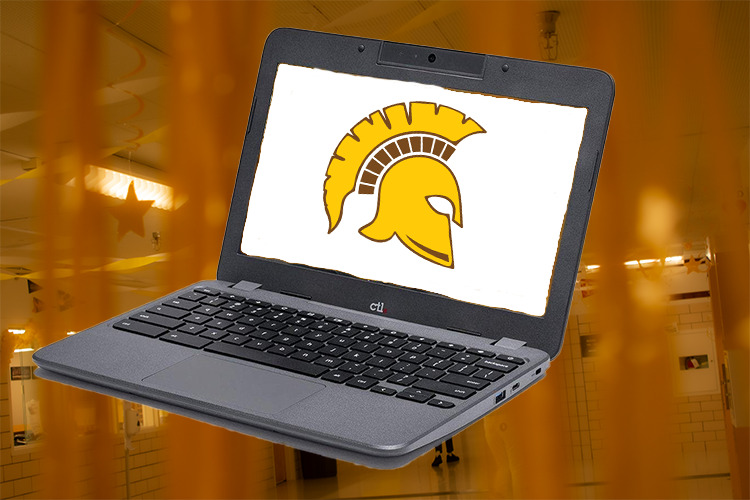 At the beginning of the school year, every student was assigned their own Chromebook for use in the classroom. photo by Shana Saint-Phard

Denver Public Schools recently obtained funding to provide every student with their own device to facilitate learning both in the classroom and at home.

In November of 2020, Denver taxpayers voted on a bond and mill levy that would allow Denver Public Schools to increase its debt by 795 million dollars. The district claimed the bond would not raise Denver property taxes, while the mill levy, providing up to 32 million dollars in funding, will cost $4.25 per month ($51 annually) for area homes valued over $465,000. $71.6 million of the bond would be invested in quality learning environments, and $65 million would be in technology and safety. As such, DPS now has the funding to provide everyone with an electronic device, an opportunity that was previously inaccessible to many students.

Marshall Hanks, Thomas Jefferson’s School Tech Resource, says that there has been a 1:1 technology program that provided Chromebooks to elementary and middle school students. There were initially 100 schools involved, and the program’s success inspired the district to expand it under the new bond. “The first phase of that was to purchase around 50,000 Chromebooks, because every 6th through 12th grader got a brand new Chromebook,” he said.

In previous years, TJ purchased around 500 Chromebooks for classroom use and placed 20 Wi-Fi hotspots around the building for internet access. This year, TJ received upgrades to its technology and infrastructure with this new bond, replacing all of its old Chromebooks with current models. In addition, they nearly tripled the number of Wi-Fi hotspots to around 150, some of which were even placed outside. Jessica Delgado, TJ’s School Tech Partner and Chromebook distribution manager, said most of these upgrades were done to the “dpsstudent” network that school devices connect to, and minor upgrades were done to the slower “dpsguest” network. Upgrades were carried out after the hybrid school year when staff realized that having so many devices on one network was not sustainable without improvements. “We had to create a whole new network [dpsstudent] for students to be able to go in, and just make sure they didn’t go in and clog up [the other] network,” she said.

Older laptops issued to students at higher grade levels that are still usable are being re-issued to elementary schools since they don’t need the same hardware that older students do. Hanks estimates that by this fall, every student in DPS will have a Chromebook. However, he also expects older students to have their Chromebooks replaced every four years, if not sooner. “Our history with the Chromebooks so far, and with laptops in general, is that the batteries don’t really last much beyond three years,” he said. Delgado said that since the Chromebooks were covered under a lifetime warranty, it was worth re-issuing any still functioning laptops to younger students. “All the new ones are on a warranty, the older ones ‒ some of them are coming to their end-of-life warranty, but again, those have been here for 7 or 8 years,” she said.

Hanks also claimed that the loss rate of Chromebooks was very high last year due to devices being taken home and mishandled. “It’s just people not being careful with things that don’t belong to them.” He says TJ has yet to see how these new Chromebooks will hold up now that school has resumed in person. Nonetheless, with tens of millions of dollars invested in the upgrades, both Hanks and Delgado anticipate current students, rising students, and students who were unable to access the technology before, finding the school-issued laptops useful to their learning experience both in and outside of the classroom.