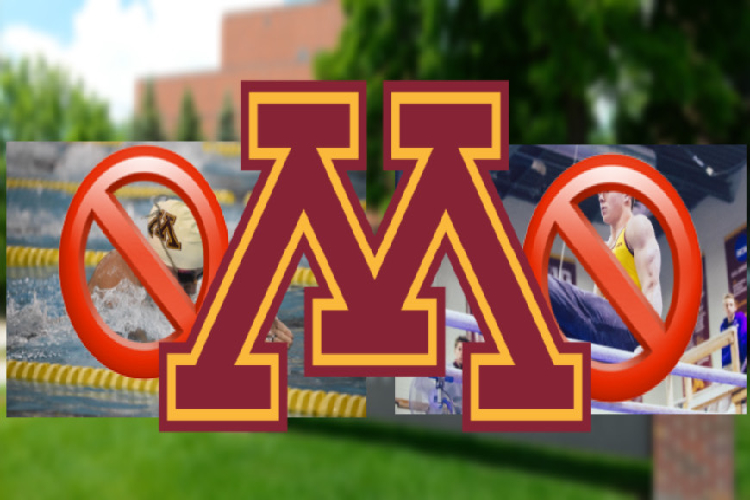 University of Minnesota, among many universities has revoked their men's gymnastics and swimming program. graphic by Nakya Castille

Across the country, colleges and universities have shut down certain athletic programs after years in the running.

Gymnastics, swimming, and diving programs across the United States have made the difficult decision of ending programs. This decision affects thousands of young athletes who have dreamed of taking their athletic careers to the next level. Senior and competitive gymnast Madysen Bradley has expressed her sadness when it comes to colleges shutting down both women’s and men’s gymnastics programs. “The most disappointing part about this is that people have worked their whole lives day in and day out to get where they were just for it to be taken away from them. When they shut down an entire program all of the gymnasts within that program are also lost and forced to quit the sport; it simply isn’t fair.” Bradley also shared her personal experience as she was between two schools when deciding where to commit and about a week after she made her decision, her next choice in schools ended their program. Along with women’s gymnastics, men’s gymnastics programs have taken a devastating hit. The University of Iowa and the University of Minnesota, big schools for men’s gymnastics, followed other schools and decided to cut their men’s gymnastics program. In 1969, there were over 200 National Collegiate Athletic Association (NCAA) men’s gymnastics teams, now in 2020 there are only 13 programs left. Gymnastics is commonly overlooked when it comes to being a men’s sport, as it is placed as a women’s sport. The ending of programs will further weaken the chance for young men to choose gymnastics as the sport they want to pursue. Bradley also explained, “Something else that’s critical for men is that unlike women, they do college gymnastics before they do the Olympics so if they don’t have the stepping stone of college, many of our amazing men’s gymnasts would never even try to make it to the Olympics.” Due to this drastic change over the years, men’s gymnastics will become more competitive and will cause many young men to lose a dream of theirs and face the heartbreak of losing a future in the sport they have worked so hard at.

Swimming and diving programs at colleges and universities are also facing a cut. Due to the pandemic, swimming programs have faced a rapid decline across the country. Popular universities like the University of Iowa and Dartmouth are just a few of the many that have cut their swimming programs, meaning some young swimmers will miss their chance, while others that are in college swimming programs already will have to either transfer or make the decision to end their swimming career early. Senior and competitive swimmer Caitlin Beery voiced her feelings on the matter, “It is really disheartening to see schools cut programs where the athletes worked so hard to be a part of. As a swimmer, seeing schools cut swim and dive programs is again really disappointing.” Beery also brought up that swimming may not be as popular as football, but the athletes work really hard at their craft and deserve the chance to compete at the college level in what they have worked insanely hard at. Cutting the swim and dive programs can discourage people from even considering swimming, effectively bringing down swimming’s popularity. “When the University of Iowa cut their swim program, the football coach got a raise and that was a huge slap in the face. I understand some sports, like swimming, don’t bring in as much money like football but that doesn’t mean that the sport is any less than any of the high profiting sports.” Beery believes that if the colleges or universities made the decision to move some money or funding around, sports wouldn’t have to go through the process of ending an athletic program or ending a young athlete’s career.

Through years of training and competing, sadly many young athletes will lose their chance to further their athletic careers. Athletes in or out of the United States are facing this difficult decision first hand. These athletes have to rearrange their plans for their future whether that includes their beloved sport or not.