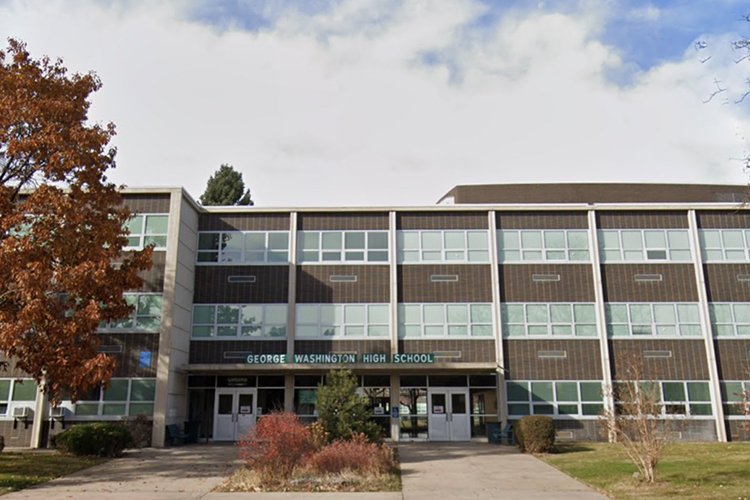 Students and faculty at George Washington High School deal with the aftermath of hateful vandalism. photo Courtesy of Google Maps

On Saturday, October 16th, racist, anti-semitic, and homophobic graffiti was written all over George Washington (GW) High School in prominent places. The graffiti was removed before the kids returned to school on the following Tuesday; however, due to social media, it was almost impossible to ignore the images of horrific language on the school buildings. The shock of how this vandalism took place spread from school to school. People could not believe that this type of hate crime would occur in a place where students go to learn and should feel safe.

Kristen Waters, principal at GW, commented on the attack at her school in an email to families. She wrote, “We will not tolerate this reprehensible act of hate in our community and condemn these actions.” There was a police report filed, and there is an ongoing investigation into who committed the crime. Students across the district were shocked by this act of hate. When Denver South High School student Valantina Zeremariam first saw the graffiti she said, “I was honestly shocked, I didn’t think something of that magnitude would happen in DPS today.” There has been a lot of tension in the last year due to the attention on Black Lives Matter and the attack on the U.S. Capitol, but the outright racist, homophobic, and anti-semitic statements and slurs written all over the school were shocking to most students.

However, GW Student Body President Abielle Alemayehu commented, “I was not surprised that someone has these opinions and has that much hate in their heart, but it was shocking and hurtful to see it so close to home, on my school doors. It took me a while to process everything that was said and written.” This exposed an unfortunate truth of the reality of the division still so prominent in today’s culture. The vandalism was a huge disappointment in how public the hostility was. Alemayehu was not shocked, her response was immediate, it was sad. There is a lot of stress and fear among the students who attend GW. Alemayehu shared how the school is offering support for their students who are all still coping with the attack on their school.

Another issue discussed was how the school can use this situation to grow as a community with a more diverse perspective. However, during a comment of her disappointment in how this situation was being handled Alemayehu said, “We had an opportunity to bring people together and talk about how this impacted everybody, but instead we didn’t make it an equitable conversation and we yet again [silenced] a lot of voices.” She shared how this assault has been a chance for the community to seek improvement but is falling short of helping the students who have been impacted. She described how the school planned a meeting to discuss a unity project and next steps. This is a start for GW to take a look in the mirror and begin creating a safe space and a better, more nurturing environment for their student minorities.