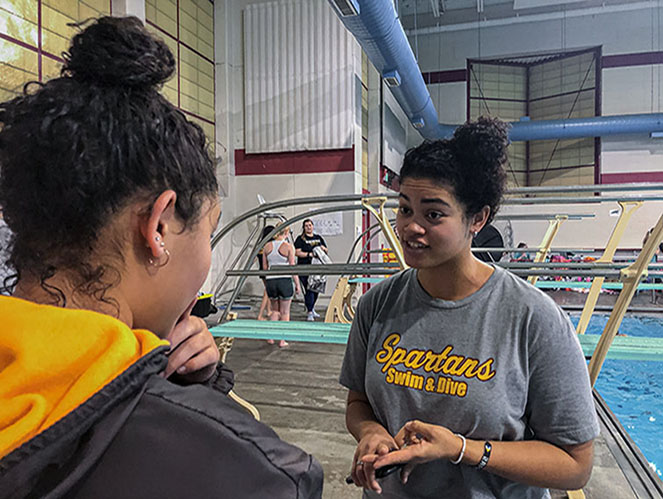 After a phenomenal season last year with two state qualifiers and new teammates, the swim and dive team received a new coach with hope of another successful season. Indiya Williams, summer team coach and Division 1 (D1) diver, was hired this year. As an experienced diver, she brings her knowledge and talent to her new position.

Williams grew up in Aurora, Colorado where she first started diving because of a career-ending back injury in gymnastics. Williams wanted to continue her involvement in athletics, and found diving to be very similar to gymnastics which attracted her to the sport. Williams dove for a club team at Eaglecrest High School, and continued diving D1 at the University of Idaho (U of I) where she also studied mathematics for three years. Williams is ranked as one of the top ten performers in all U of I divers and qualified for the Zone E Championships, but was unable to compete due to an injury.

For those who are not familiar with the sport, diving focuses on the grace and difficulty of the dive. Scores range from one to ten with typically three judges and divers usually receive scores around a six with a successful dive. Diving is about skill, but more than anything it’s about mentality. At the collegiate level Williams had dealt with immense pressure, “If you don’t have your mind in the right place, you won’t be able to perform.” Despite the pressure, TJ is currently ranked 11th in the state, with senior Hanna Channell ranked 8th in 3A.

The dive team this year nearly doubled in participation and as they welcomed their new coach. From the sidelines the girls’ relationship with their new coach is clear with their constant smiles and laughs despite dives that might not receive tens.  The team this year has been able to push themselves with Williams supporting them throughout their dives. Denise Hanselman, a sophomore diver, had another fantastic season after beginning to dive freshman year. “[Williams] has given us way more practice time and she pushes us to be the best that we can.” Hanselman was able to qualify for state along with Channell.

Williams has set high standards for diving as far as her first year of coaching has gone, “[I] would also love to see my girls finish top five at state this year.” The girls on the team have already been able to quickly create memorable bonds with their coach, even for first time diving seniors, who were quick to shed tears on their senior night. “My favorite part of the season was watching Indiya’s face every time someone dived, you could always tell if she thought it was good or not just based off her reaction.” Hanselman attested. Williams is looking forward to TJ’s future seasons and is open to coaching the boys dive team. Williams wants high school students to be able to start participating in  new activities that they typically wouldn’t choose and more importantly she is taking them out of their comfort zones and pushing past their limits.

*Update: After publication, the TJ team finished 13th in 3A. Channell ranked 14th before state and placed 22nd overall. Hanselman was not ranked going in but placed 24th at state.