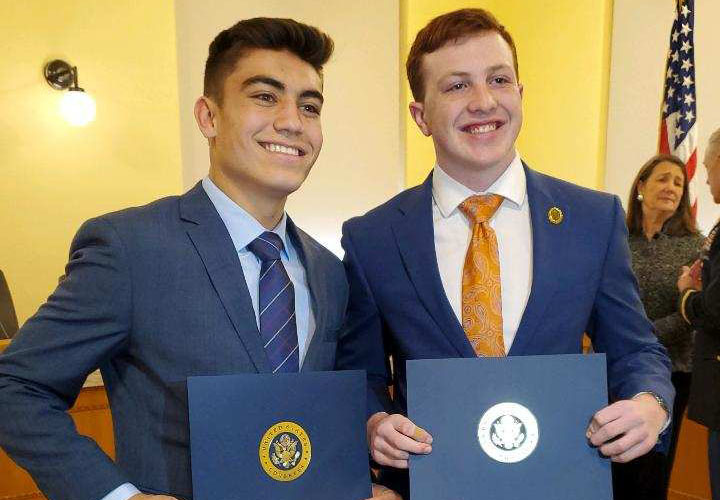 Houston Hood and Geronimo Romero-Campbell both received the honor of being nominated for the Armed Forces Academies.

Being nominated for the Armed Forces Academy is difficult to accomplish. The application process is rigorous, and in order to receive the nomination, the applicant needs to be well-rounded, have contributed to their community, and be committed to serving their country for future years to come. Two students from Thomas Jefferson High School received this prestigious award, seniors Geronimo Romero-Campbell and Houston Hood.

In order to get nominated into the Armed Forces Academies, the school itself must first select the student as a candidate to fill out the application. “You have to apply to the school, and if the school deems you competitive, you apply for the nomination, and if you do not get the nomination, you cannot get into the school. If you do [get the nomination], it still does not give you an automatic spot,” explained Hood. As far as the application goes, there are many factors that are considered, including: GPA, extracurriculars, letters of recommendation, transcripts, and an essay. If they make it through that process, the candidates will be rewarded with a group interview. After that, there is a physical test to ensure the candidate has the strength and stamina to enter the forces. Hood stated that the test includes, “a kneeling basketball throw, as many chin-ups, push-ups, and sit-ups you can do in a minute, as well as a mile run.” After this, the Congressperson of the District selects the students who they want to nominate for the award. Campbell and Hood are both in District 1 of Denver, and Diana DeGette is the Congresswoman of that district. Finally, after this long process, Hood and Campbell were chosen for the nominations.

When it came time for the ceremony, both Hood and Campbell described it as relatively short.  “The ceremony was actually pretty quick, we went up, shook Diana DeGette’s hand, received the certificate, and sat back down. She said a couple words, thanked us and our parents, and that was that,” explained Campbell. Though it was short, both boys enjoyed the ceremony and felt honored to receive such a big award.

Hood and Campbell wanted to go into the Armed Forces for many reasons. Campbell wishes to enter the United States Naval Academy, while Hood aspires to enter the United States Air Force Academy. For Campbell, there were three main reasons he wanted to enter the field: “It is a great education. I get to work and be around like-minded students that have the same goals as me, and I think I work best in that kind of environment. We do a lot of physical activity which I think is fun, and there is also that sense of duty to our country.” As for Hood, he wanted to enter the field because “it runs in the family, and I’ve just been really interested in aviation for my whole life and I’m interested in actually getting into the business.” Hood hopes to major in aerospace engineering, and Campbell wants to major in mechanical engineering. Still, the process is not over yet. Hood and Campbell have yet to be accepted into the school of their choice. Admissions letters are to be sent out anytime from now until the end of April.

The TJ community hopes that both boys will get accepted. Everyone is very proud of the hard work and dedication they have put in so far, as well as their passion to represent their country for many years to come.