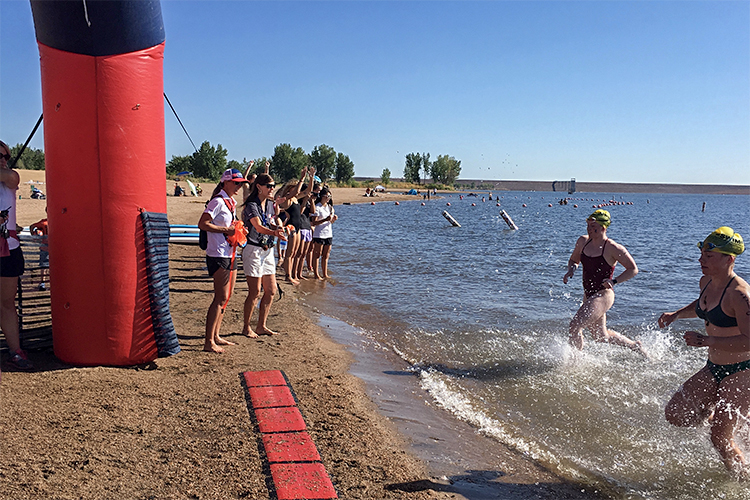 Swimmers racing to the finish line after swimming a 5k. photo by Amy Beery

Swim Across America hosted its 2nd annual event in Denver at Chatfield Reservoir.

Swim Across America (SAA) is a non-profit organization that fundraises to help researchers find a cure for cancer. They organize open water and pool swims across the United States in an effort to financially support doctors who are researching life-saving treatments. In their years of running these events, they have granted over $80 million to fund cancer research and clinical trials. The events occur across the nation and benefit not only research but also hospitals in the area. For instance, they raised money for the Denver Children’s Hospital. SAA has many beneficiaries, including, but not limited to: Johns Hopkins, Alliance for Cancer Gene Therapy (ACGT), Mass General Hospital for Children Cancer Center, and Chicago Rush University Medical Center. At the Denver event specifically, over 300 swimmers raised close to a quarter of a million dollars to aid cancer research and the Denver Children’s Hospital.

To participate students can volunteer at the events, pay to swim either a half-mile, a mile or a 5k. Swimmers of varying levels can take part in the event and can join a team of friends. Above all else, people are encouraged to donate to SAA directly.

I found out about the SAA Denver event through a swim friend of mine. I chose to swim a 5k because I wanted to challenge myself and I could physically swim it; I was in tip-top shape to swim. I tried to get more people involved by posting it on my Instagram story and with that post I got one other person to join my team. I fundraised for my cause and raised $300. It may not seem like much, but it is $300 going towards cancer research that they otherwise would not have.

The morning of August 25th, I woke up at the painful hour of 5 a.m. After one long drive and a cup of coffee, I arrived at Chatfield Reservoir. I checked in, gave them my form that signed my life away, and let them put my number, 121, on both of my arms and my right hand. Then, I entered the main event. I saw booths ranging from sponsors to activities within SAA, like “Why I Swim” activity. They had tattoos, to which I put two tattoos on my face. As for the “Why I Swim” part of the event, I wrote: “I swim for those who can’t.”

I found my team, Team Ranch, and put my tracker on my ankle and got ready to swim. They gave their safety announcement, and then we were off. I was very nervous while I waited at the start area, but once I started swimming luckily all of that went away. I ran into the water and was greeted by the icy cold. Lucky for me, I was swimming right beside one of my teammates, which made things a lot easier for me. Obviously, I swam for a very long time, but it never felt that way. Sometimes in practice, it feels like it’s never-ending and it goes on for eternity. That was not the case, and before I knew it, a full hour had passed. I finished the 5k in about an hour and fifteen minutes.

I am not going to lie and say that I felt amazing after swimming a 5k because that is so far from the truth. Mentally, it was a hundred percent worth it. On the physical side, it hurt. My hips ached with every step I took, my arms were limp, I felt sick, and was exhausted, but it was worth it.

I would highly recommend joining this event next year. It was a great experience and one I will surely never forget. I encourage TJ students to get out and participate in this amazing event and learning experience.