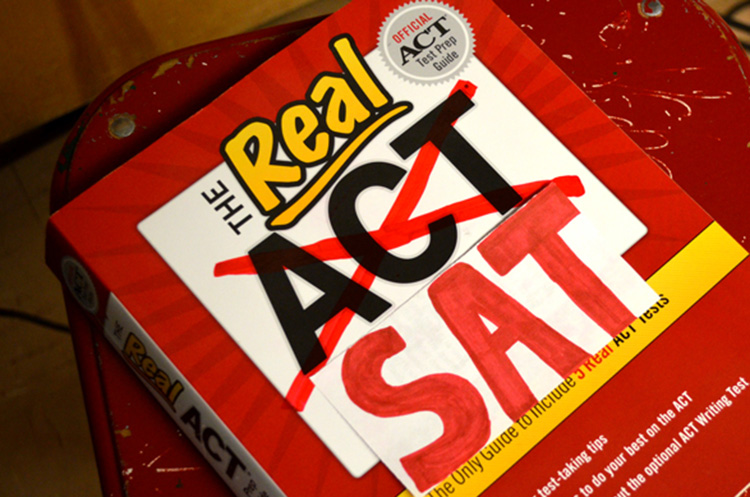 Students are gearing up for the shift in testing, assisted by extra study sessions and practice tests. photo by Javontae Jourdain

Colorado has switched from an ACT state to an SAT state, requiring juniors to take the SAT instead.

For 15 years, high school juniors in Colorado have been required to take the ACT as an entrance exam into colleges; however, in December of 2015, a committee of teachers and administrators from around the state selected the SAT as the new required exam. The switch was made due to several reasons: the redesigned SAT tests the skills and knowledge that are needed for college and career readiness, it is accepted by nearly every school in the country (including every college and university in Colorado) and the PSAT, will replace the PARCC test for sophomores-this test will take only three hours as opposed to eleven hours of PARCC testing.

Though some may find that it is almost the same as the ACT, the redesigned SAT has many differences that made the choice to change more reasonable. The ACT is more straightforward; the SAT requires much deeper thinking for questions which tests the students’ abilities to problem-solve and analyze. Also, the SAT and ACT now have similar advanced math concepts, whereas the previous SAT tested different knowledge in that area. Both of the tests have an optional essay that is offered. The SAT gives 50 minutes for the essay while the ACT gives only 40 minutes, allowing the students who decided to write the essay more time to write a well developed piece of writing.

The sophomore class will be most affected by the switch because their plan for the ACT will have to be changed in order to accommodate the SAT instead. In the spring, sophomores were preparing to take the Aspire test, which is a pre-ACT test for sophomores to see which sections need to be improved upon and how they can prepare further for the ACT in the next school year. These students were also planning on taking the PARCC test, a standardized state test which was introduced to schools last year, but this will be replaced by the PSAT. The PSAT will test the students on subjects that will likely be on the actual SAT, and it will show them which areas need to be improved on in order to get the best possible score.

Sophomore Laura Brandon, who took the PSAT in October of 2015, said, “I feel like I’ll be more prepared for the SAT since I’ll have taken the PSAT twice, but it was a bit surprising that they made the change because we’ve been doing the ACT for 15 years. Since I’ve started high school, I feel like everything was preparing me for the ACT.” Although many people were surprised, schools have begun preparing their students for the SAT, in ways such as having them take practice tests and showing them the formatting of the exam. “An SAT score is much different from an ACT score, so we want to make sure that our programs to prepare juniors for these tests are effective and that they’re helping get students into colleges,” said assistant principal Mike Christoff.

Although the decision to switch to the SAT was made this year, current juniors will not be required to take the SAT, as many of them have only been preparing for the ACT. Additionally, switching juniors’ game plan in the middle of the year could leave them unprepared and lead to lower scores than expected. Since this year’s juniors will still be taking the ACT, ACT prep will continue as normal. In coming years, students and schools will begin preparing for the SAT, working on the content of the test to create a smooth transition for the students and administrators.