Hooping Through the Virus 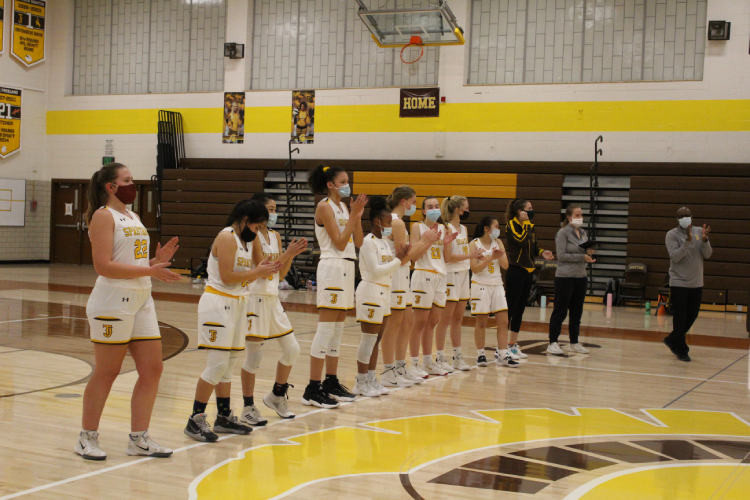 The girls' team poses in the gym to celebrate their 2021 season. photo courtesy of Yearbook staff

Despite the virus and the dangers it brings, the Lady Spartans Basketball Team was able to still have a season.

High school athletics have looked far from normal this school year and the Girls’ Basketball Team had a season that was no exception. At the beginning of the school year and the months leading up to the season, it was unclear whether or not high school basketball would be cleared to play. In Season A, which took place in the fall, sports such as tennis, softball, and cross country were able to take place despite the dangers of the coronavirus, but the sports in Season B set forth additional challenges. Wrestling, Boys’ and Girls’ Basketball, and Girls’ Swim and Dive all take place inside and, with the exception of swimming, encompass a great deal of physical contact. Eventually, DPS approved the season for all sports in Season B, but enforced several requirements and restrictions in order to ensure the safety of all participants involved.

In a standard year, Girls’ Basketball begins its season in early November and comes to its close in late February, but a January start to a season that was roughly half its normal length was just one of the limitations put on the team. Players and coaches were required to wear masks at all times, practices could not exceed 90 minutes in length, and no fans were allowed in the gym for games. Despite a less-than-ideal situation, the girls battled through the quiet gyms and sweaty masks and finished with a successful season under their belts. TJ finished with a 5-6 record on the year before they were unfortunately forced to quarantine at the end of their season. The Spartans were led by sophomore Brooke Murrell who averaged over 20 points per game as well as 14 rebounds a game.

The season provided these Spartans more than just a chance to play basketball. It gave the girls a social event to look forward to every day and a chance to be in the school even if it was not in the classroom. Junior and three-time varsity player Grace Leonard described the season by stating, “There was less pressure and the coaches were more focused on us having fun and being able to socialize and play.” Although the season had many limitations, being able to play this year provided these student athletes with the opportunity to have a somewhat normal experience and gave the seniors Ashlee Taylor and Grace Stelzer one last chance to play. Stelzer described her experience this season, “With the unpredictability of our world I was just happy that I got one last chance to play when originally it didn’t look like that would be the case.”

As the sights shift towards next season, the team’s hopes are high for their chances. Leonard says that she is looking forward to next year because “this season we started to play more confidently and knew how each of us played.” Hopefully next year looks more like the seasons have in the past and COVID-19 is suppressed. This season the girls’ team missed out on bonding opportunities such as team dinners and riding the bus, so the possibility of a more normal season next year would bring the team much closer. The future is bright for the Girls’ Basketball Team at TJ as well as for high school sports in general. As more people are getting vaccinated, the upcoming school year should bring back more normal and exciting athletic seasons.