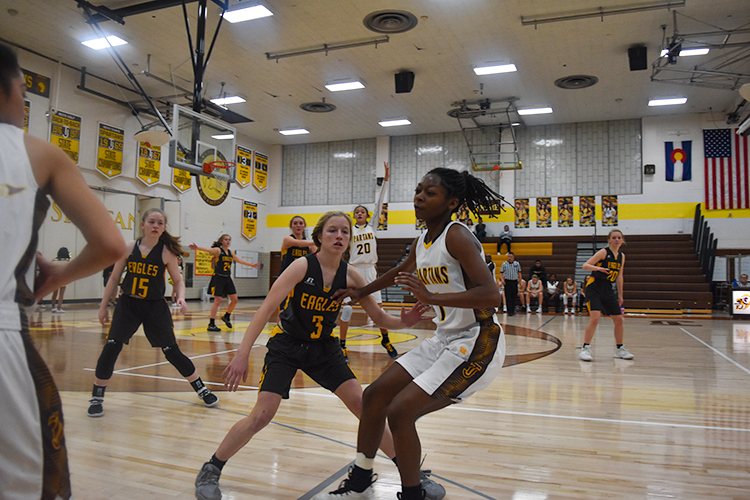 The Lady Spartans were able to find their chemistry to finish their season strong. photo courtesy of yearbook

TJ’s girls’ basketball team talks about their court visions for next year’s season.

The girl’s basketball team is no stranger to hard work, the team plays with incredible chemistry that was built throughout their difficult season. After key seniors graduated, the team had to rebuild with returning players but the loss did not affect the team’s effort. This season was focused on creating a team that will grow together throughout their high school years.

The young team had a hard beginning, but muscled through their losses and ended up having a successful finish to their season. Jazz Wright, the only senior on the team this year, described how the most challenging part of the season was “…learning how to play with each other. There’s a lot of different skill sets and personalities on the team, so learning how to have that chemistry with each other and on the court as well.” Throughout the season, the girls learned how to play with one another, and create a powerful team. The girls finished their season and went into the playoffs seeded 41st. Although they lost to Cheyenne Mountain, the girls were very pleased to end the season with a strong finish.

The girls were still able to keep a positive attitude throughout their season and have set goals for the next year’s season. The work that the girls put in reflected the rebuilding season that they were presented with. One of this year’s team captains, junior Grace Stelzer, has hope for next year when their season returns. “We could work on figuring each other out, our strengths and weaknesses as individuals, and our strengths and weaknesses as a team.” With only one player graduating this year, the team will be able to start off their season strong next year.

The team overwhelmingly felt that the best part of the season was how they were able to overcome the obstacles that came throughout the season, such as being a new team. The girls were able to turn their season around and made it to the first round in the playoffs. Playing the 24th ranked team, Cheyenne Mountain, the girls had lost their final game but were not disappointed with how far they had come. The team was able to grow together and learn how to play, which gives hope for the season next year.

Next year’s program will benefit from having the team know how to play with one another, and be able to strengthen the bond between the players. This year’s season showed the unity between each teammate and exemplified exactly what it means to be a Spartan. Next season will be one to remember watching these girls tear up the court.