In School vs. Online Learning 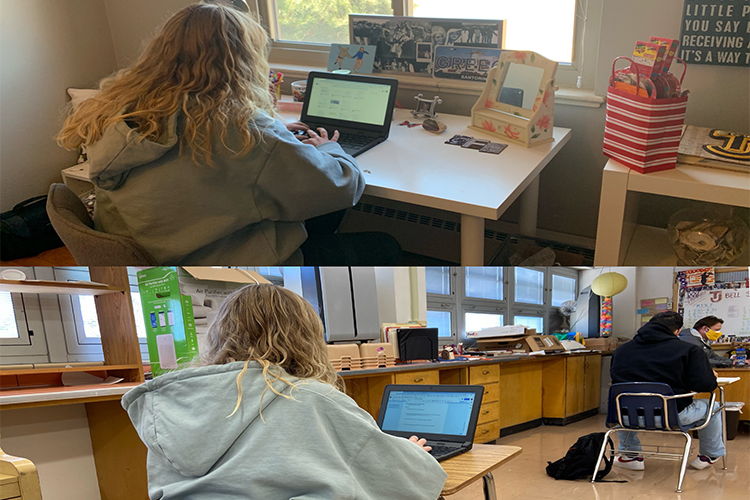 A side by side comparison of in-person and online school. photo by Avery LoJacono

While in person learning and virtual learning are seemingly polarizing options, students are able to attend their classes from their preferred location.

At Thomas Jefferson and other DPS schools, students had not stepped foot inside of the building the entire year due to the pandemic. On February 2nd, the first group of TJ students were able to go back into the school. Only half of the alphabet (last names A-L) goes to school on Tuesdays and Wednesdays, while the other half (last names M-Z) goes on Thursdays and Fridays. Although the return to school is strange, the students who chose to go in-person are happy to have the opportunity. Although students were given the option to go into the building, some students chose to stay at home due either to health factors or the ease of at-home learning. Three TJ students, Lily Mullins, Kyle Hrin, and Stephen LoJacono, were able to enlighten the rest of TJ on their choice to go back or stay in the comfort of their homes.

Mullins has a very unique perspective on going to school, as this is her first year in high school, so she is not as comfortable as students who have attended TJ in years past. Like many other students, Mullins shared that she was excited to go in-person to get away from the distractions at home. Also, she was eager to go to in-person classes because she was tired of learning through her computer and not being able to make those connections with teachers and new friends. Mullins did not have the chance to meet her teachers in person before February and found enjoyment in learning more about her teachers in a personal setting, rather than over the screen. Like other freshmen, Mullins had never been inside TJ for a normal school day. She was nervous about finding her classes at first, but found ease due to the friendly people at school that helped her get around the one-way hallways. She reminded herself that she was not the only one going through this strange experience. The year has not been easy on students, especially freshmen, as they are transitioning from a different setting and a more rigid workload. However, the new in-person learning experience has allowed students like Mullins to find comfort. Coming from Saint Mary’s Academy, Mullins wanted to go to a high school that had more kids, diversity, and new people. Mullins shared how remote learning was hard at first, “People go into high school already with their friend groups and I didn’t have that, so remote was hard but now I get to meet people.” At TJ, Mullins felt a sense of community, which attracted her the most, and she is happy to be able to be in the school to get the most out of the reasons she chose to go to TJ.

Hrin, a junior at Thomas Jefferson, chose to stay at home because of how his schedule has adapted to online school this past year. In Hrin’s own words, “I decided to stay at home because of baseball and work, and it worked better with my schedule to be at home and be more flexible.” He likes the idea of being able to get up right before school and start his class, rather than wasting time getting ready and driving to school, only to be sitting in a mask all day long. Hrin also shared how he has been able to start new positive habits because of online classes, such as eating breakfast and managing his workload by prioritizing what is important to him. During online school, Hrin has tried to make the most out of his junior year academically by continuing to collaborate with friends and make connections with his teachers, even on the computer. Although Hrin and his family do not personally have any health factors that prevented him from going to school, he realizes how easily COVID-19 spreads and does not want to put others at risk. Hrin does not regret his decision to stay at home because he can get his schoolwork done on a schedule that is realistic to him and can still succeed in his classes.

Sophomore LoJacono was another student that opted to go back in person. A big factor that convinced LoJacono to go back to school was that he missed TJ’s environment and not being able to see some people since last March. Going back to school, LoJacono felt the stress of having to get around the school with the one-way hallways and forgetting where all of his classes were. Luckily, LoJacono’s teachers and friends helped him understand the school’s new system. While choosing if he wanted to go back in-person, LoJacono heard that it would be online learning, just at school instead of his bed. After going back for a week now, LoJacono stated, “I completely disagree that it’s the same thing as being at home. I have found that my attention span is a lot longer when the teacher is right there. I am not tempted to go on my phone because it’s more person-to-person.” LoJacono is happy to be back in the TJ building, seeing his teachers, and feeling like he is learning again. LoJacono also shared his experience with having to be quarantined because a classmate tested positive for the coronavirus. He intends on staying in-person unless he is forced to stay at home, away from being allowed to play sports, but has found enjoyment from being physically at TJ.

The students at Thomas Jefferson were given a hard choice to go back or stay at home. Each family chose differently based on personal reasons, such as wanting to connect with other students or not being able to go back because it interfered with their schedule. Mullins and LoJacono were able to give their insight on why it was so important to them to go back into TJ to be able to feel successful in learning, while Hrin chose to stay at home like many other students. Hrin did not find it reasonable to go back in person when he had already adjusted to doing school through Google Meets. The Thomas Jefferson students are still making the most out of their year in school, even with the unfortunate circumstances.