Kicking Through the Season 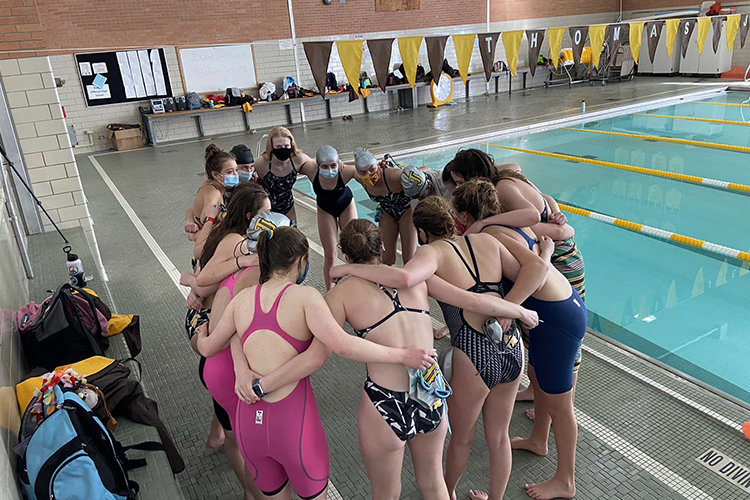 The girls' swim and dive team cheering each other on. photo by Justine Sullivan

The TJ Girls’ Swim and Dive team had a short but successful season.

The 2021 TJ Girls’ Swim and Dive season was full of new challenges due to COVID-19, but the girls were able to persevere and make the most out of their season together. The swim team had five girls who qualified for A-League this season. Congratulations to senior Caitlin Beery, junior Gabriella DeMaria, junior Georgia Hartley, sophomore Kate Little, junior Avery LoJacono, and senior Laura Zelenka. Beery and Little also individually qualified for state this year, as they were ranked in the top 20 out of all Colorado 3A Swimmers. The TJ Girls’ Swim team had three relays that qualified for state: the 200 medley relay in 18th place, the 200 freestyle relay in 19th place, and the 400 freestyle relay in 14th place. The dive team, with just two people, was also successful this year. Junior Denise Hanselman qualified for state and the freshman Sophia Zizzo qualified for A-leagues. Great work to all of the swimmers and divers!

This season the swim team had to adapt to the change of wearing a mask when they were on the pool deck and at their meets. The “virtual” meets this year meant that each school’s team had to compete in their home pool and there were no spectators allowed. The shortened season and not having fans cheering on the swimmers was difficult when competing, but the girls have stepped up and been each other’s supporters this year. The team has also been able to stay connected outside of practice and at meets as well. DeMaria shared, “Our captains have done an awesome job planning team bonding activities this year outside of practice.” They have gone sledding and rented out a movie theater to continue to grow closer with their teammates.

Justine Sullivan has been an incredible coach and mentor for the girls this season. Swimmers have continued to say that she puts time and effort into planning practice and helping everyone grow as a swimmer, no matter what their athletic abilities are. Personally, for DeMaria, Coach Sullivan gives her advice on swimming and life. She connects with the swimmers and has an open door for the girls to talk to her when they are having a rough day. Sullivan wants all of the girls to succeed in swimming and life.

The Thomas Jefferson dive team did not practice at their home pool this year. Instead, the girls drove to Far Northeast High School to practice twice a week. Although there have only been two meets with no spectators this season, the divers were still able to qualify for A-league and state. Even though the TJ divers have had to practice with all their competitors because of the limited pools, the girls were all  very respectful and nice to one another. As Hanselman says, “It is a weird dynamic because you are teammates with the other girls and want them to do well, but you are also competing against them.” Even though there have been changes, the team still sees this year as a positive opportunity, as they were able to have a less stressful year because of the shortened season and were able to try new dives that they would not have tried in years past. The dive team is looking forward to expanding their team next year and having another rewarding season. For all DPS divers, there was only one coach this season. Dawn Post has done a really good job at making connections with all of the athletes and helping the girls learn new skills. Her job has been a very big role, but she has made an effort to help all of the divers improve and have an enjoyable experience in times of COVID-19.

The season has been different for the girls’ swim and dive team, but individually the athletes were able to compete to the best of their abilities. The swimmers, divers, and coaches have put a lot of effort into their seasons and have made fond memories. Congratulations to all the swimmers and divers this season for all of their hard work and dedication!