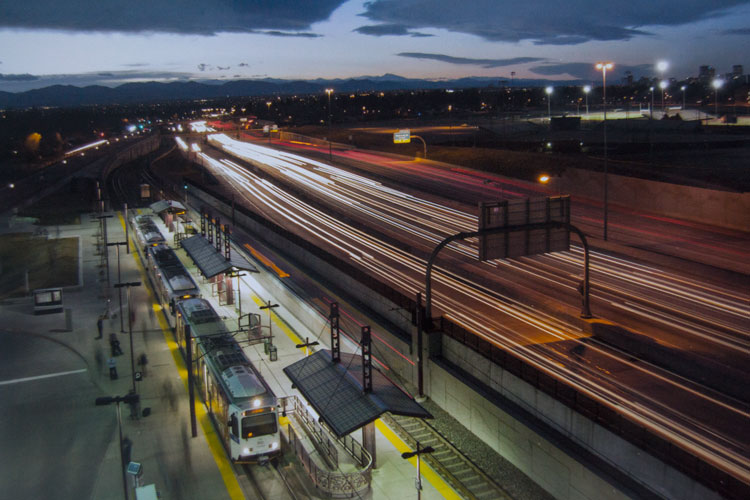 Mobile ticketing is now available for the RTD. Simply purchase a local day pass or regional/airport pass before boarding. photo by Will Forrester.

The expansion of Denver’s light rail system, set to open in waves throughout 2016, will connect Denver and beyond.

Since its humble opening in 1994, Denver’s light rail system has serviced hundreds of thousands of Denver citizens. In the past the light rail has primarily serviced people that live within the inner region of Denver, but starting in 2016 the rail system will become accessible to several more regions of the Denver Metro area. RTD’s FasTracks program is opening four new lines running to Denver International Airport (DIA), Westminster, Wheat Ridge, and Aurora. A map of the projected 2018 light rail system. Photo courtesy of RTD. Click through to see the full-size version.

Each new line will connect several surrounding areas of Denver. The A Line to DIA is perhaps the most anticipated rail line, which will run on 23 miles of rail from Union Station in downtown Denver to DIA, with six stops between the two. In October of 2015 it was announced that the A Line will open on April 22, 2016. The B Line to Westminster, opening in the summer of 2016, will travel straight from Union Station to Westminster in an estimated eleven minutes. The G Line runs from Union Station to Wheat Ridge with seven new stations opening in the autumn of 2016, servicing northwest Denver, Adams County, Arvada and Wheat Ridge. The R Line will run through Aurora from Peoria to Lincoln through a total of sixteen stops, and opens in the winter of 2016.

With the coming of the new lines, RTD has redesigned its fare system. One-way tickets will be $2.60 for local travel (1-2 fare zones), $4.50 regional (3+ zones), and $9.00 to travel to DIA. Day passes will also be available, with unlimited rides for one day for the price of a round-trip ticket. Student and other discounts are also available for these tickets, which cut each fare in half.

Along with rail lines, RTD has released the Flatiron Flyer, a redesigned rapid bus service from Denver to Boulder. The previous nine bus lines were simplified into six, and the new service will be faster, more comfortable, and more frequent.

FasTracks is the program behind RTD’s push to make the Denver Metro area more accessible to Denver citizens and beyond. These new lines are only one step toward the future of the light rail: there are several plans in store for its expansion. The N Line to Thornton will open in 2018 and will expand access to Commerce City, Northglenn, Thornton, and north Adams County. The L Line will extend the current rail line in downtown Denver north to the A Line, and will replace the section of the D line that runs through Five Points. Several extensions have been proposed for the C, D, E, F, and B lines, with the C and D expanding to C-470 & Lucent south of Littleton, the E and F to RidgeGate Parkway, and the B through Boulder with its final destination in Longmont.

All of these developments will be a great advantage to not only commuters but students and others who do not have vehicles, but still want the chance to explore Denver. RTD’s light rail’s future has only begun, and people all around the Denver Metro area are excited to see a quicker, more accessible, and more connected Denver.