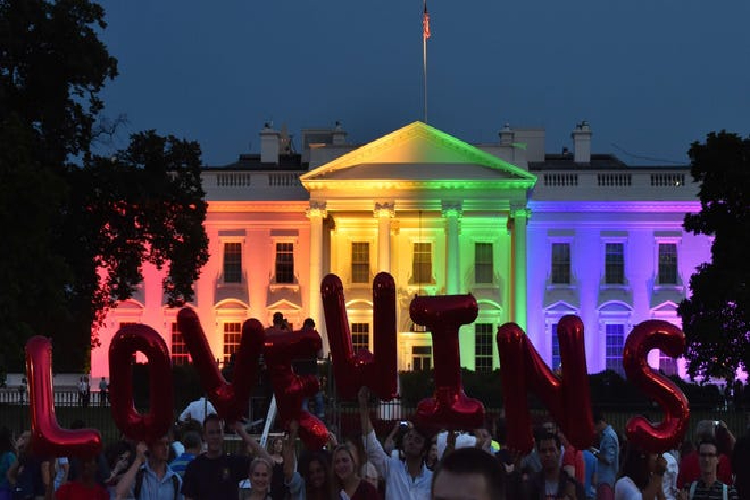 An image taken at the White House after the marriage equality decision was passed on June 26th, 2015. photo courtesy of USA Today

The potential overturn of the marriage equality decision may have a detrimental impact on LGBTQIA+ youth.

The fundamental human rights of a whole community of people are being threatened, mainly because of religious beliefs. It is heartbreaking to think that after only five years of gay marriage being legal, the right to love who we want to love might be taken from us. A major issue in society has been the relationship between religion and the LGBTQIA+ community. “It’s a problem with a lot of bad Christians, the Christians who use religion as a defense for their hate. They pick and choose parts of their religion that they can use to defend their backward ideas,” mentioned Skyler Sabec, a member of the community who grew up in a liberal, religious household when asked about her opinion on religion and its relationship with the LGBTQIA+ community. Religion can be a beautiful gift. It is a way for people to come together, have a community, and be connected to their faith. However, when used to strip other people of their rights, it can be hard to see it as a gift.

On October 5th, 2020, news broke that County Clerk Kim Davis refused to give a same-sex couple a marriage license in Rowan County, Kentucky. This event led to her being brought in front of the Supreme Court. The court declined an appeal made by Davis, which prompted Supreme Court Justices Clarence Thomas and Samuel Alito to suggest that the marriage equality decision be overturned on the basis of religious freedoms. However, as a county clerk, Davis took an oath of office to “truly and faithfully enter and record all orders, decrees, judgments, and proceedings of such court, and will faithfully and impartially discharge all other duties of my office according to the best of my abilities and understanding.” Davis said that she understood her oath to mean that “in upholding the federal and state constitutions and laws, she would not act in contradiction to the moral law of God.” She said that her reasoning for this was that she stated, “So help me God” at the end of her oath, which is not required when taking the oath of office, but was added by George Washington and has since become a tradition.

Building on that argument, those who side with Davis state that they placed their hand on a Bible to be sworn into office. However, it is not required to be sworn in with one’s hand on the Bible. Multiple government officials have not followed this tradition: John Quincy Adams was sworn in with his hand on a law book; Keith Ellison was the first representative to be sworn in using the Quran in 2006; a St. Louis County Council member, Kelli Dunaway, was sworn in using a Dr. Seuss book. The idea that the oath of office is connected explicitly to the Christian faith is inaccurate, considering there is no official religion of the United States. This notion is now possibly leading to the fundamental rights of a community being taken from the citizens.

Instead of pulling at threads, it is crucial to discuss the Constitutional rights given to every American citizen. In the 14th Amendment’s Equal Protection Clause, it is stated that “No State shall make or enforce any law which shall abridge the privileges or immunities of citizens of the United States.” Taking away same-sex couples’ rights to marriage goes directly against this amendment. Not only does this go against the Equal Protection Clause, but it also goes against the Due Process Clause in the 5th Amendment. This clause states, “No one shall be deprived of life, liberty or property without due process of law,” meaning that a state can not deny a group of people their fundamental rights without due process. In the 1967 case Loving v. Virginia, the Supreme Court considered marriage a fundamental right. In this case, the Supreme Court used both of these standards in the decision that states banning interracial couples from getting married was unconstitutional. At the time, a portion of people of the Christian faith strongly opposed this because it was seen as a sin, as same-sex marriage is seen now. So why isn’t banning same-sex marriage considered unconstitutional, when it clearly should be?

The claim that the legalization of same-sex marriage goes against the 1st Amendment by restricting religious freedoms is absurd. The marriage equality decision does not force anybody into a same-sex marriage; rather, it forces people to respect others. However, a member of our government is supposed to uphold the Constitution’s laws, no matter their religion. Our country was built on the idea of the separation of church and state. It is this ideology that is causing detrimental effects for the 23.6% of our population that identify as LGBTQIA+.

As a young member of the LGBTQIA+ community, I have firsthand experience of how somebody can use religion as a weapon to justify their hate. I have had to accept that a portion of my family would not attend my wedding if I were to marry a woman, that they do not accept me for who I am. I have been told I am “going to hell,” I’ve been called slurs, and I’ve had to try to understand that a piece of scripture has led people to decide I’m an abomination, but I knew that there was never going to be a way for them to stop me from loving who I want to love until now. With the upcoming election and the possible confirmation of Amy Coney Barrett to the Supreme Court, this threat against the basic rights of the people is something we keep in our minds. This is not just a fight for the LGBTQIA+ community. This is a fight for the American people, for people who believe in the ideals our country was founded on, for people who believe in the fundamental rights given to every human being.