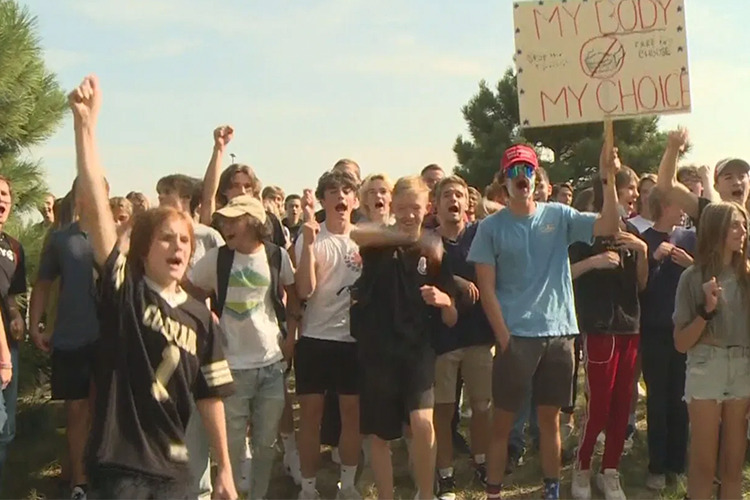 Douglas County will officially leave the Tri-County Health Department after a school mask mandate was implemented.

On Wednesday, September 1st, the Tri-County Health Department (TCHD)- which encompasses Adams, Arapahoe, and Douglas County – officially instituted a mask mandate that requires all individuals over two years of age, regardless of vaccination status, to wear facial coverings while in all indoor school settings. This mask mandate is not up for negotiation within the separate counties and will remain in effect until at least December 31st, 2021.

As a result, the district decided to end its 55-year-long partnership with the TCHD. Douglas County made this decision because the mandate was out of line with the past agreement that Douglas County had made with the TCHD last November.  That agreement stated that the counties in the region had the ability to opt out of the Department’s health mandates. Douglas County officials voted to formally leave the TCHD on Tuesday, September 7th, 2021. The vote consisted of the County’s three commissioners and was a unanimous vote.

Douglas County leaving the TCHD prompts fears for the Department’s future. Due to the fact that Douglas County’s abrupt withdrawal from the health department was against the agreement the three counties had to give at least one years notice before leaving the department, Arapahoe and Adams Counties have both raised concerns about the impacts on their counties. Legal action has been considered according to the letter sent to the Douglas County Attorney from Arapahoe’s Attorney. However, there have been claims of both Adams and Arapahoe County considering withdrawing from the TCHD as well.

This decision comes in time for the rates of positive COVID-19 cases among school-aged children to rise to almost 252,000 per week as of September 2nd, according to the American Academy of Pediatric. While children over the age of twelve are eligible for the Pfizer-BioNTech vaccine, vaccination rates remain at a crawl. This then in turn leaves room for variants that are much more likely to cause break out cases and serious illness to form. The lack of vaccinations and relaxed – even, non-existent – mask policies have in turn made way for more waves of cases with increasingly young victims who are not currently eligible for the protection the vaccine gives.

At 9:30 a.m. on Wednesday, September 1st,  a group of students at Thunder Ridge High School (TRHS) walked out of their classes and gathered on the front lawn of the school. At the protest, kids were seen with cut up masks, signs, and “Make America Great Again” hats. The protests even attracted the attention of the local and national media, such as Fox News and Columbia Broadcasting System. The owner of the TRHS Freedom Club Instagram account, who organized the protest, is a junior at the school and has not followed up on requests for an interview. Currently, Douglas County School District still requires all students and faculty to wear masks, and according to the district’s website, Corey Wise, the Superintendent of the district, stated that the protests were “… unfortunate stories about students and visitors refusing to wear face coverings in buildings.”

The future of the TCHD and the areas it services is still unknown. Whether there will be legal repercussions, financial issues, or coverage problems, the issues with the department are still developing.