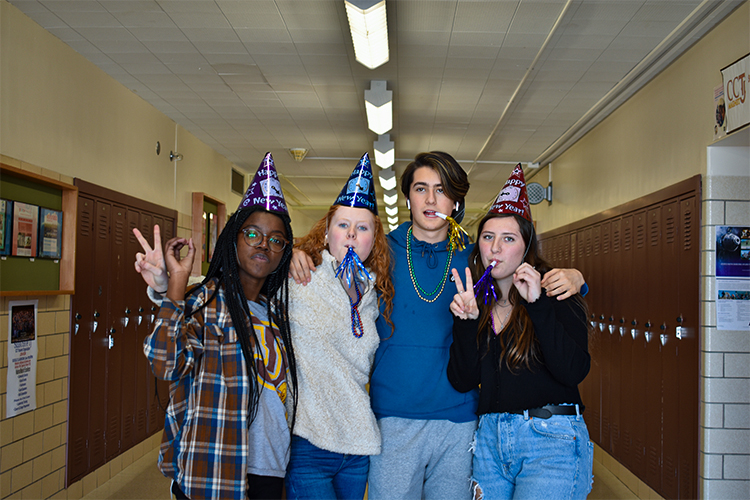 The new year is a great time for celebration and improving oneself. photo by Atlas Zaina

As the New Year rolls in, it’s the best time to look at resolutions in a new light.

Using the New Year to make a positive change in one’s life is a tradition that has appeared in multiple cultures over thousands of years, these days it’s mostly practiced through the making of New Year’s resolutions. People are supposed to use this time to make a list of goals they wish to achieve in the New Year. It’s more common than not that people go into it with the mindset that this year won’t be anything like last year, they’ll actually lose those ten pounds or they’ll really call their mom every week. Or at least that’s what they think. New Year’s resolutions are notorious for being easily dropped and forgotten about within a month, but it’s not always the fault of the person who makes them. Keeping a resolution takes effort, but there are plenty of tools at one’s disposal to help along the way and to make sure a positive change is made.

When it comes to resolutions, “exercise more” tends to be at the top of people’s minds. This is by far one of the most common New Year’s resolutions made and also one of the most commonly dropped. The same problem is seen in “exercise more” appears in other common new year’s resolutions such as “read more,” “get organized,” or “travel more.” These resolutions may have good intentions behind them, but the major flaw with these are that they are too general. Reading more doesn’t distinguish between reading a book to reading the back of a cereal box, traveling can be considered going from upstairs to downstairs, there’s no concrete way to make sure one is following through with their commitment. By no need means do they have to be checklists for one to constantly stay on top of, but there needs to be some attainable goal when it comes to making a resolution. When it comes to the goal of “exercise more,” again there is the question “what does that mean?” With no finish line, it’s easy to look back at what one has done and feel that no progress has been made. After going to the gym every day for a few weeks straight or having been on a meal plan for that same amount of time, people would expect to see results they could make them proud. Of course, making a significant change to one’s body takes longer than that, longer than the initial rush of motivation to even start working out lasts. This all spells disaster for trying to make a positive change and only really sets people up to burn themselves out and drop the resolution they felt so strongly about just a few weeks ago. This applies to the other common resolutions, people think of a general idea they want to implement into their lives and then jump into it headfirst with no structure to keep them on a path to success.

None of this means that someone should just give up on whatever resolution they have their heart set on, there are plenty of ways to keep their goal and make a significant difference in their lives. The best way to make an effective resolution is the wording. Instead of “exercise more,” try “I’ll go on a walk every other day.” Making a specific goal that is easily trackable provides motivation to keep going by giving progress to look back on. There is also “I’ll read three new books this year,” “I’ll try a new food each month,” “I’ll go out to dinner with a friend once a month.” The way these resolutions are worded leaves out the ambiguity of what needs to be done for the resolution to be considered successful. More detail can be put into these to make them easier or harder, they can be adjusted for who makes them. Everyone needs something different in their lives and so a resolution should be personally suited for them. “Exercise more” or “read more” can mean something completely different for each person who makes it. Making a specific resolution gives people the satisfaction of knowing they actually achieved their goal by giving them an actual task to complete. The way to word a resolution is very important but one can’t always help if their schedule is filled or they simply forget. Using a reminder app or having a friend help keep track are ways to make sure one doesn’t let themselves fall behind on their goals.

When it comes to making a change in one’s life, one should keep in mind that they’re human and no one is perfect. Skipping a gym day or not reading a certain amount of pages during the week isn’t slacking off, everyone needs time to relax and refresh. Making a positive change isn’t always the easiest thing to do but even trying is a major leap towards self-improvement, and making sure that one is mentally and emotionally healthy is just as important as physical health. None of this should have to wait until a specific day either, while it may be traditional to make a resolution for the New Year, self-improvement is too important to put off until it’s a special day. Making a positive change is a noble act for someone to do, it’s hardly ever easy but there are plenty of ways to make the process go by smoother, and the most important thing one can do is take that first step.