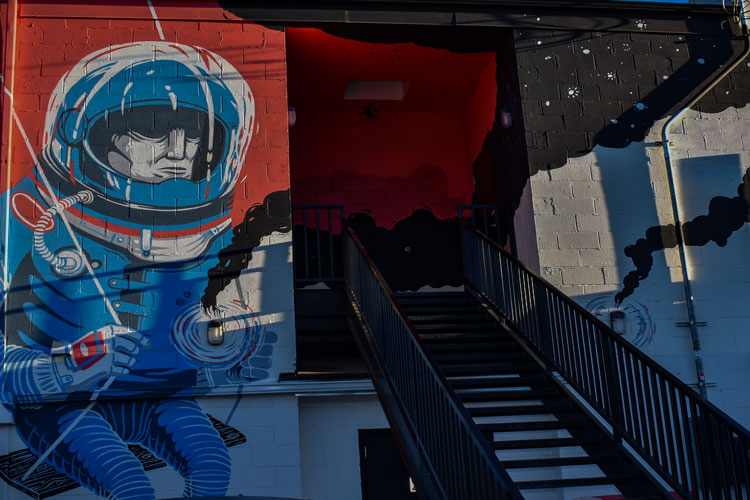 Street art decorates the alleys and streets of urban areas around the world. photo by Ella Stephens

Street art is a symbol of expression for those without a voice, a source of imagination for those without a canvas, and a haven of creativity for those who want to break away from the social norms. It is usually created on surfaces in public places like sidewalks, the exteriors of buildings, and highway overpasses. Whether it be graffiti, stenciling, or 3D drawings, street art is in nearly every town and city, and much of it has evolved into something truly breathtaking. The reputation of street art was not always positive. In the early 60’s and 70’s, it was often affiliated with gang culture, and was criticized by many politicians and affluent communities. Street art was also associated with hip-hop culture, and became popular in New York. As the popularity increased and new buildings were built, there were more canvases for artists to put out a message for the world to see. The movement began circulating throughout the United States, intending to spark a conversation about topics that were historically taboo. As the years went on, art evolved, and the minds creating the pieces did as well. Street art started to become ubiquitous, and people began to stop and read the story articulated by these pieces, especially in urban areas. As the audience increased in size, so did the street art itself. Artists began getting paid to paint murals on the sides of buildings to cut back on blandness, which advanced more social commentary regarding the political messages within art. This led artists to make political statements with their art, and this style of activism began to spread. Street art is now a worldwide phenomenon, with household names such as Blek Le Rat in Paris and Banksy in Britain. On a more local level, art pieces are everywhere in the urban areas of Downtown Denver. Artists like Sandra Fettingis are brightening up the dull buildings that embody most of the Denver metro area. She creates geometric art, which is different than the art usually seen in urban areas. Fettingis explained, “Street art impacts the community it is in and is accessible to everyone.” Street artists believe that by adding more color to urban areas, they make the community “safer to be near.” Sometimes the bleak downtown areas can feel dreary, but when people see the bright colors and important messages depicted by murals, they feel a sense of warmth and passion surrounding them.  Fettingis creates her art themes by acknowledging the surrounding environment and architecture of the buildings. She wants to add something new to the community that allows people to coexist with the surrounding elements that create a sense of place in a community. She explained, “I look at a site to influence and inform choices such as color, shape, size and composition.” Sandra Fettingis makes an impact on Denver with her art, and her passion and love for street art shines through as she brightens communities with the stroke of her brush.  One of her more notable pieces adorns the front of the Denver Central Market (below). TJ’s drawing and painting teacher, Leonard Fox, also believes street art has an important impact on society, but in more than one way. There are the “truly artistic” forms of art, and then there is simply “defacing public property.” Fox believes that street art can invoke a brighter outlook on life, believing that there is always a message behind what you see on the streets, and it is the willingness to receive and understand the message that is important. Fox also wants to see the youthful aspirers of the art community display their art, saying, “There are many talented teenagers out there, and I want to see their artwork as long as they are permitted to do so.” Fox is a supporter of street art because it spreads awareness on social issues throughout urban areas, and he hopes it will expand and become more diverse in future years. All in all, street art has an especially important impact on society in this day and age. It is important that people keep their eyes open and see the messages behind the paintings and murals they see on the sides of buildings. Nowadays, opinions and stances are shared in unique and abstract ways, especially when it is shown through the medium of art. Street art provides people with a voice that they might not have had, which creates a sense of unity amongst the people creating the art, as well as those observing it.