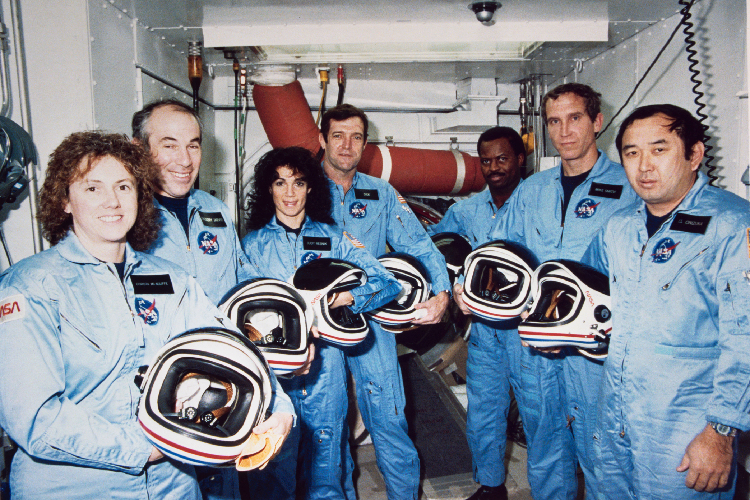 It has been 35 years since the devastating disaster of Space Shuttle Challenger.

It was on a brisk morning on January 28th, 1986. Space Shuttle Challenger and its seven astronauts—Commander Francis Scobee, Pilot Micheal Smith, astronaut Judith Resnik, astronaut Ronald McNair, Payload Specialist Gregory Jarvis, astronaut Ellison Onizuka, and teacher Christa McAuliffe—were taking off from Cape Canaveral, Florida. There was a crowd of approximately 500 adults and children gathered in Florida to watch the launch alongside the thousands of adults and students watching the live coverage on the news. At 11:38 am, Challenger lifted off. Approximately 73 seconds after launch, the shuttle was engulfed by flames, killing the seven astronauts inside. This was the first time lives were lost in a space shuttle flight.

Moments after the disaster, the American public was in shock; they demanded an investigation into what happened on January 28th, 1986. There were many failures that occurred that allowed this to happen. The disaster was traced to an O-ring failure in one of the rocket boosters. Rocket boosters are important for launching a space shuttle into low orbit. The boosters push the shuttle to reach speeds of approximately 3,000 miles per hour. Inside the boosters, temperatures can reach 6,000°F. Without proper sealing, hot gases can leak from the side of the booster and burn through the external fuel tank, leaving the craft vulnerable to becoming unstable. In this case, the O-rings could not properly seal the booster. On that morning, the temperature was approximately 31°F, causing the rubber O-rings to be stiff and contract. When the launch occurred, the rubber was warmed up too fast. The intense change in temperature allowed for an improper seal of the booster and caused this disaster to occur.

The Challenger expedition presented an opportunity to send the first average citizen into space and to get students across the nation excited about science and space travel. In order to gain public interest and support of the space program, the National Aeronautics and Space Administration (NASA) launched the NASA Teacher in Space Project. The purpose of this project was to inspire a new generation of students and teachers to be interested in mathematics, science, and space exploration. Out of 11,000 applicants, McAuliffe was selected and would be the first teacher in space. The plan was to film several demonstrations to be used to create a learning curriculum that could be used to teach students all over the nation. The lessons included topics such as effervescence, chromatography, liquids in microgravity, and Newton’s Law. Unfortunately, the plans for this learning curriculum never came to fruition.

January 28th, 1986 was a devastating disaster and an engineering failure. The Challenger tragedy serves as a reminder to engineers of the life and death consequences of their creations. Additionally, reminds people of the deadly combination of politics and science. The seven astronauts that were lost that day have forever left their mark on history and science, even 35 years later. In his address to the nation, President Ronald Reagan stated, “The future doesn’t belong to the fainthearted; it belongs to the brave. The Challenger crew was pulling us into the future, and we’ll continue to follow them.”