Roaring into the Twenties 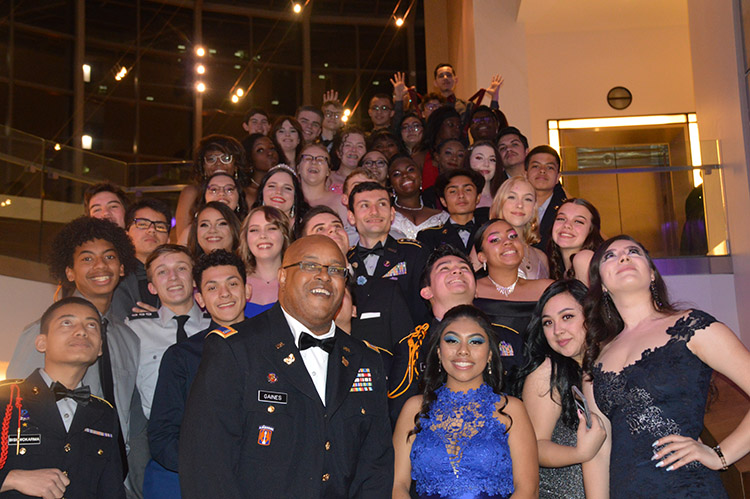 Students from the DPS JROTC high school programs attended the 80th celebration of the military ball, a formal event that honors and celebrates fallen soldiers.

In honor of fallen soldiers and those who served in the military branch, DPS JROTC programs annually host a formal dance, commonly known as the Military ball, in order to recognize the soldiers who served but also to give some recognition to the cadets from each school. The dance is a formal event where military members don their fanciest dress uniforms. If the member has a date, they often dress in the same attire.

Every year, the schools come together to take a vote on what they want the ball’s theme to be. The winning theme ended up being the Roaring Twenties, so attendees were instructed to sport attire from the glamorous era. It was not required, but if anyone did, it would have been welcome. Like prom, the military ball has commandants that are chosen from each school. Whoever has demonstrated the greatest excellence in JROTC is awarded the Military Ball Queen. In order to become the commandant, one has to have been nominated for their skills and must demonstrate the values of a cadet. It is open to everyone in the JROTC program.

Transitioning back to this year’s ball, to represent TJ, Senior Vanessa Villegas was chosen as the commandant. While she did not win this year, she maintained a positive attitude. “Sadly I lost the military ball commandant, but it’s okay. No hard feelings to the girl who had won because she totally deserved it,” stated Villegas. This being her last military ball, she had some sentimental feelings to express. “I did and I didn’t have fun at the ball this year. I felt that some people didn’t understand the dress code for dances which did upset me. But other than that, I did enjoy my last military ball.” Vanessa was satisfied with the night overall, and she enjoyed everything from the dinner to the dancing.

Senior Alexander Erickson, who also goes by Alex, had similar thoughts. While he was not nominated like Vanessa, this was still the last ball of his high school career. “This was my last military ball and I made sure I enjoyed it. I had a lot of fun; I talked, danced, ate, and celebrated with my peers and close friends. I made sure that I had some memories to carry along with me.” Alex was the Battalion Commander for TJ’s JROTC, so during the event, he also played some parts in the celebration, such as raising his saber in respect to the cadets who were the commandants of their schools.

Seniors were not the only attendants at the military ball. Sophomore Nevaeh Hencemann and Junior Destiny Hernandez-DeLucio were also new to this year’s ball. Hencemann and Hernandez had both known and heard about the ball in the previous year. Having heard excellent reviews, they both wanted to go this year to see for themselves what the ball was really all about.

“I was expecting the dance floor to be a lot bigger, but other than that, the ball did meet my expectations,” noted Hencemann. The ballroom where the dance was held was fairly huge; however, as Hennceman stated, the dance floor was not enormous, but it did well enough for those who danced and jumped on it. Despite the floor being small, Hencemann enjoyed herself, and she plans on going to more military balls throughout the rest of her high school career.

Hernandez by far was the newest to the ball, for the simple fact that she is not in JROTC but was instead invited by a friend. Unlike the others that are in JROTC, Hernandez had no clue what she was getting invited to. All she was aware of was that it was a dance and that she needed to dress up for it a lot better than what she would dress up for an event like homecoming.

“I thought the military ball was a very formal party. When I heard about it, I thought it was going to be all strict and all serious. It was serious in the beginning, but then towards the end of the night, all students were able to enjoy themselves for all the hard work they’ve been doing that year. I loved it a lot because I got to dance so much that my feet hurt until the day after,” commented Hernandez. There you have it; even someone who is not in the program enjoyed herself at the ball.

This year’s ball was amazing enough for everyone who attended. It may not beat prom or homecoming, but for those who had a say about the ball, they all enjoyed it. If you have a friend who is in JROTC, ask them if they can invite you to the ball, too; you will not regret that decision.