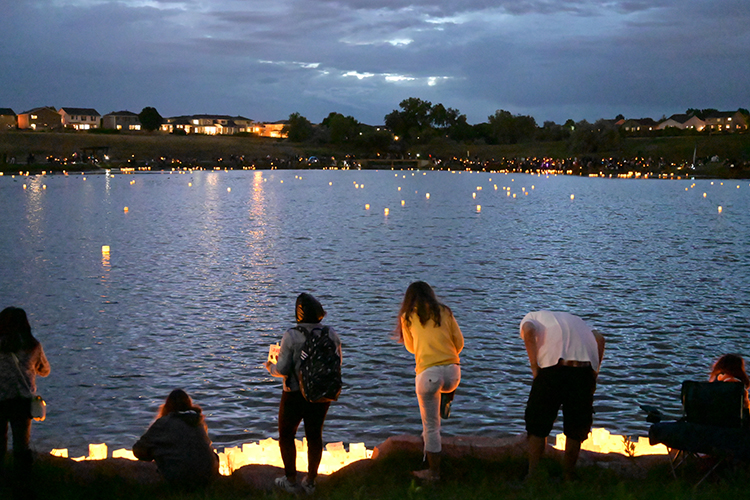 Lanterns are released to celebrate and recognize past and future lives. photo by Atlas Zaina

Colorado Enjoys the Magical Atmosphere of the Lantern Festival.

As summer came to an end, time ran out to make long-lasting memories. A number of Coloradoans joined one last time at the Water Lantern Festival to attend an event that would not be forgotten. For the last 2 years, the Water Lantern Festival has gathered people to celebrate in over 34 cities. It began as an act of community to bring people of all ages and backgrounds to celebrate life and those before and ahead of us. Since then it has built to be that and so much more. This event, held on July 20th at the southern lake in Carpenter Park, was a celebration to bring people together. Due to unfortunate weather conditions, participants were advised to seek shelter as a thunderstorm was approaching. Through pouring rain, attendees kept spirits high as they spent this time decorating their lanterns, and enjoying the company of Flynn Rider and Rapunzel of whom was played by Jesse Davis and Elizabeth Anderson. Davis said it best, “What’s more Colorado than standing under tarps and tents all day waiting for it to stop raining?” A few guests even played music to pass time as the storm passed above, keeping morale and energy high until the festival truly began.

Those who waited out the rain would be pleasantly surprised by breathtaking views of lanterns filled with story floating atop the water.  Each lantern was decorated with heartfelt to celebrational messages or even just a simple piece of art. A few lanterns even held origami within their paper walls. Though the beauty went so much further than just the view, the meaning, soul, and memories held by everyone standing along the lake’s edge were astounding. After the sun had set nothing stood in between the people, their lanterns, and all that surrounded them. Mikayla Bruton, an adventurous youth, saw the event as “a sign of relief.” Her lantern was used to spread goodwill by writing sentimental sayings in dedication to her grandparents. As her lantern floated among the many others it held the message to, “find the beauty in everything and [that] there’s always love in everything.”

When asked, most of those who attended the lantern festival agreed that the best part of it all was the community that gathered together. One of the volunteers, Jennifer Brown, couldn’t help but love seeing the people coming together. “Bringing community together and giving people an outlet and a way to celebrate and share their stories,” was the aim of the festival staff, and was accomplished very well. Bruton stated how nice it was that “We can always come together in moments like this and enjoy the beauty together.” There was no denying that people gathered together for this one night to hold each other up and create something new. People came to say goodbye and let go of past hurt, or people, or to celebrate, or even just to enjoy the night. According to Brown, “Sometimes little girls come up and talk about losing a parent or something to cancer and sometimes its a couple celebrating their pregnancy.” No matter what everyone was there to support one another.

Soon the festival came to a close, memories were both made and remembered as everyone left their lanterns to float. The message of community and vulnerability was taken home with those who stayed and summer was sent off with a bittersweet finale. Whether people went to celebrate or to let go and remember, they all walked away with something new. 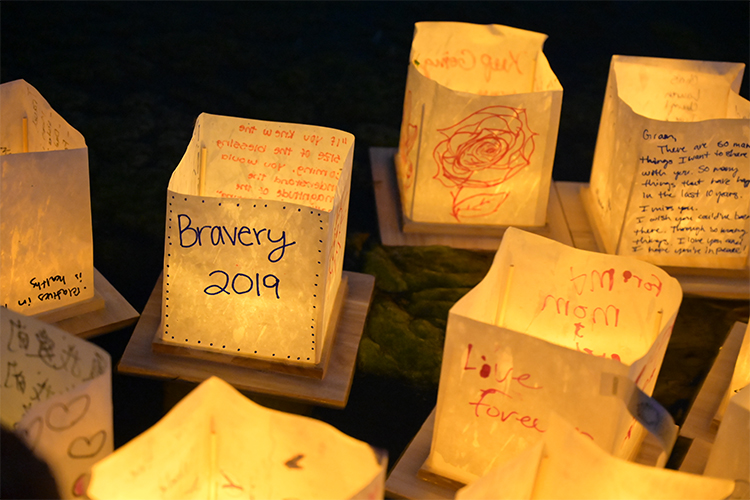 Decorating a lantern provides an outlet to express grief and hope. photo by Atlas Zaina