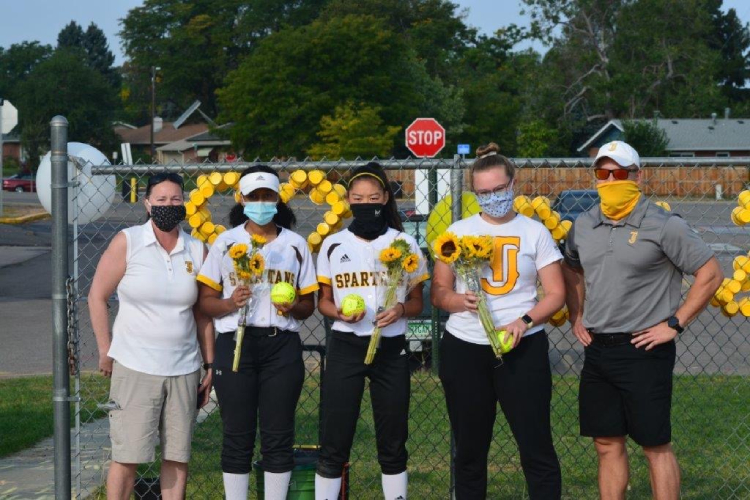 Softball takes on the season even with COVID-19 circumstances.

This year’s season was different because of the circumstances with COVID-19, but the softball team made it the best they could. The team had an overall record of 5-11 and placed 5th in the Denver Prep 4A/5A League. They had three Honorable Mentions this season going to Freshmen Maya Cordova and Lucy Lloyd and sophomore Jazmine Rivera. This team was coached by Lisa Kelley, who played at the University of Michigan and played in three College World Series.

This season, the team could only play other teams in DPS and played everyone twice, which in turn shortened the season. The practices were shortened to 90 minutes instead of two hours, and all temperatures were to be taken at the beginning of every practice. The coaches were to wear masks all the time, and the players had to wear masks when they were not active. This season started very late, so there was not much time to really teach the girls. Kelley stated, “COVID made the season difficult because I didn’t have time to teach, only to coach.”

Alice Larm, a senior and captain on this year’s team, said that being a captain this year was difficult. “This year was hard to be a captain because we weren’t able to connect well with each other due to social distancing and not being able to do normal team bonding.” This was not the senior season that she had anticipated, but she knew that playing would make her senior year feel somewhat normal, so she did not want to miss out. “This was in no way the senior season I had expected; I felt grateful for being able to play, but it was hard. It was really hard being worried about getting COVID but also wanting to play like normal,” Larm expressed.

Lloyd, this year’s MVP, knew that this season was going to be different but still wanted to play. Even though Lloyd was only a freshman, she had a huge influence on the team. “The captains helped us feel welcomed by always being kind, inclusive, encouraging, and helped us get to know each other by doing fun team building activities during some practices,” Lloyd states. Having more new players on the team made it important for the captains to step up. “I learned that being a captain can be hard during these times, but it is important to do what you can,” Larm explained. Being the team captain, she knew it was crucial to bring all the players together this season.

Even though this season was different and COVID-19 changed normal routines, this team played to the best of their potential. With a great coaching staff and team leaders, the team was brought together to work as hard as they could. Congratulations on the great season, Lady Spartans!