Springing Back Into Action 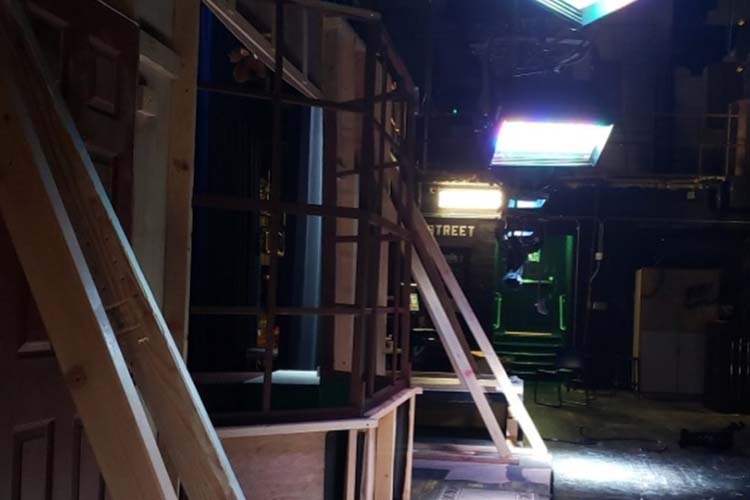 The set from the fall play proves that TJ is getting geared up for auditions. photo by Cece Prime-Morales

The Spring Musical is here again, and is taking on a new twist. The format will be a musical theater showcase with three acts including 10-12 numbers. The direction of the musical is 100% student choice and motivated by the interests of those auditioning. The theater teacher Andre Moss explains, “We are watching what the students want to bring to us, so we haven’t given them any instruction and they get to pick what their favorite shows [to perform on stage] are.”

Auditions will be held Tuesday, 2/15, for the singing portion and Wednesday, 2/16, will host the acting auditions. For the acting portion, students will perform the scene that precedes the song. The acting audition should be about five minutes and student selections should be school appropriate. Senior Elle Benson, president of the drama club, said, “If somebody wanted to do ‘There Are Worse Things I Can Do’ from Grease, they would do the opening scene that leads up to that song, and then they would perform the song. So in that composition, the ten performances that we are going to have make up three acts.”

Performers should come in with the piece which they choose to act or sing. If they are interested in singing a duet in the musical, they should come with a piece to sing as a duo. The same applies for those performing ensemble and individual pieces. This showcase is going to be shaped by what the actors and the actresses are interested in performing; it’s a showcase for a reason. Choir teacher Tambyr Reed explained, “My suggestion to anyone who wants to audition: do something simple. A lot of Disney is turned into musicals for a reason. It’s a great place to start. It doesn’t have to be this massive musical theater song. So pick something short, listen to it a lot, find a karaoke track, bring it in, use that, do your thing.” Consequently, auditioning will be a lot more fun when performing fun material. Reed added, “people doubt their ingrained, human nature to sing.” Simply allowing oneself to have fun during an audition is half the battle, so students should be confident.

During an audition, Moss suggested that performers “use those nerves [from performing] and make friends with those nerves, because they are there for everyone.”

When auditioning for a musical, the pianist is given the score and the vocalist sings as they play, but if there is no advance notice, a soundtrack or karaoke can be played from the soundboard. This means that any MP3 device, such as a Youtube karaoke track, can be played during the audition.

Students who have questions regarding song choices can ask Reed in room 149 for suggestions. In addition, those who have questions about acting auditions can ask Moss in room 233. The performance of the Musical Theater Showcase will be performed either late March or late April, so stay tuned.