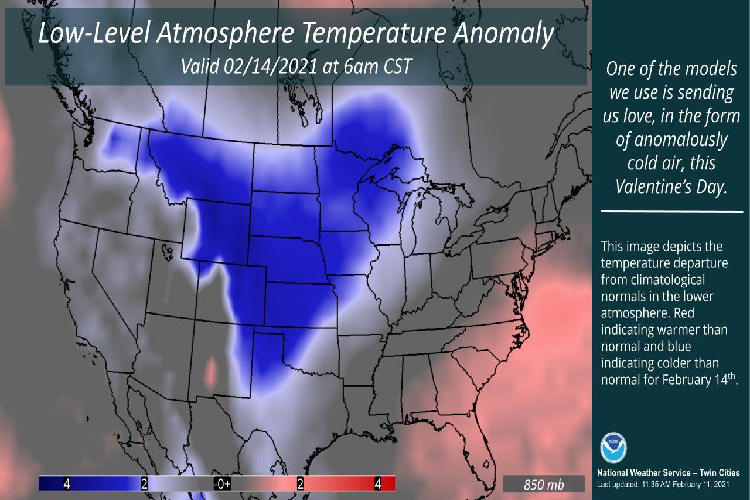 The winter storm formed the shape of a heart on Valentine’s day. photo courtesy of Star Tribune

As a result of the cold weather, a Texas power outage affected millions of people.

After a winter storm, Texas was in a state of emergency. Officials in the Lone Star State shut down the power because they were concerned that the state’s energy system was not equipped for severe cold. Millions were left in the dark and cold as a result of the combination of freezing temperatures and no fuel.

What caused this to happen? The Energy Reliability Council of Texas (ERCOT) manages Texas’ electrical system, or grid, which provides electricity to more than 26 million Texans, or about 90% of the state’s power load, according to its website. As the coldest weather to reach the state in decades passed through, ERCOT said in a statement on February 11th that they were expecting record-high electricity use due to cold temperatures.

ERCOT announced on Valentine’s Day that its customers had exceeded the winter peak demand record, writing on Twitter that the company appreciated people conserving electricity. The ERCOT Twitter account had been asking people to close window blinds, disconnect any unused appliances during the day, and refrain from doing electrical chores. President Joe Biden declared Texas to be in a state of emergency.

ERCOT made the announcement on February 15th that it had “entered emergency conditions and initiated rotating outages at 1:25 a.m. today.” Since a lot of electricity generation was offline due to the weather, the utility was load-shedding enough power for millions of customers. Rolling blackouts were the outcome, according to ERCOT’s comment, “Rotating outages will likely last throughout the morning and could be initiated until this weather emergency ends.”

Texas, as stated by Earther and The Texas Tribune, relies heavily on natural gas to heat homes and produce power, and the state’s infrastructure is designed to withstand the intense summer heat of the southwest, but it is not winterized to withstand last February’s temperatures because it seldom gets that cold there. People in Texas were going without electricity, just as the power grid was suffering from the severe cold.

ERCOT wrote on February 17th that 2.7 million customers were still without power and that they hoped to reduce outages further. Reports from around the state pointed to the seriousness of the situation.

According to ABC 13 in Houston, a mother and her eight-year-old daughter died after using a car running in a garage to produce heat. Carbon monoxide poisoning affected another adult and a child as well. Three children and their grandmother died in a house fire in Sugar Land, according to KHOU 11; investigators said the family had been without electricity for eight hours and relied on a fireplace to stay warm.

Many organizations have been attempting to provide relief to victims of the Texas storm. Austin Mutual Aid, for example, has been collecting funds to assist, and, according to a member of Houston’s Houseless Organizing Coalition, they have tried to persuade people to check out warming shelters, but many are afraid of the police. Before the hurricane, the coalition was distributing supplies. On social media, people have compiled comprehensive lists of mutual aid groups fighting the cold right now, and “It’s Going Down” published a list organized by city and region.

A magnificent Frigatebird, a coastal seabird native to Florida and the Gulf Coast, got lost on February 17 in El Paso and ended up on a borderland adventure. Dr. Vicki Milne, the head veterinarian at the El Paso Zoo, is caring for the bird, and the discovery of the bird is the first confirmed sighting of the breed in the region, according to her. The zoo is looking for someone to move the bird to south Texas, where it will be cared for at a bird rehabilitation center before returning home. Senator Ted Cruz, on the other hand, has no trouble flying south for warmth.

Cruz was pictured boarding a flight to Cancun with his family on Wednesday, February 17th, sparking outrage. Cruz quickly turned around and returned to Texas after seeing the backlash; his office issued a statement saying that he was only going to Cancun for the day to accompany his daughters on vacation because they had the whole school week off. He said he was simply acting as a “good dad.” Cruz later admitted that the trip was supposed to last all weekend, but that as soon as he boarded the plane, he had “second thoughts.” Cruz’s wife, Heidi, had actually invited neighbors to join the family to take advantage of the low rates at the Cancun Ritz-Carlton to avoid the “FREEZING” weather, according to text messages obtained by the New York Times.

Cruz has repeatedly stated that it has been an infuriating week for Texans without mentioning the leadership that has brought them to this stage. Just as Marie Antoinette allowed her subjects to eat cake, Cruz allowed his constituents to relax. Perhaps he assumed that since so many Texans were without electricity and WiFi, they would not be aware of his travels.

As elected officials like Governor Abbott and Senator Cruz try to find ways to blame Democrats for problems like the weather and infrastructure, El Pasoan Beto O’Rourke, who lost his Senate race to Cruz in 2018, has led mobilization campaigns to help the people of Texas get the help they need. O’Rourke has been hosting phone banks to assist Texans in finding shelters, warming centers, food, and water.

May Texans continue to carry their neighbors’ fire and lead themselves out of the darkness. It is obvious that many of their so-called leaders are not going to help them.