The People Behind the Spotlight 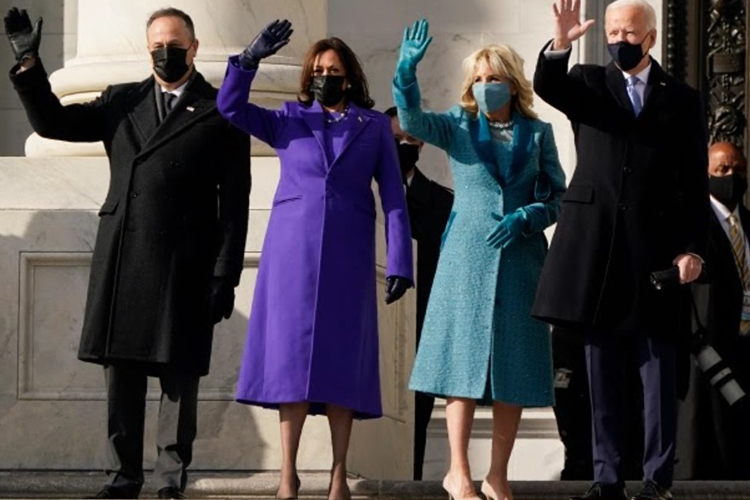 Joe and Jill Biden along with Kamala Harris and Dough Emhoff wave on top of the steps of the capitol after their inauguration. photo courtesy of Carolyn Cole / Los Angeles Times

We all know President Biden, along with the first black female Vice President, Harris, but do we really know Joe and Kamala?

Joe Biden ran for and won the 2020 presidential election as the Democratic candidate with his partner in crime, Kamala Harris, running as his vice president. Something that is not quite as widely known is that Biden has been married to his wife, Jill Biden, for almost 44 years. The two met on a blind date set up by Joe’s brother Frank, who had known Jill through college. They went to the theater and saw the movie A Man and a Woman and, as the couple says, the rest was history. With Jill making a mark as the first First Lady of the United States with a full-time teaching job and Joe becoming the president of the United States, a new power couple entered the spotlight.

The power couple got together about five years after the tragic loss of Joe’s wife and college sweetheart, Neilia Hunter Biden, along with his one-year-old daughter, Naomi, in a car accident. Joe’s two other sons, Beau and Hunter, were also in the car and were severely injured, but survived the crash. His son Beau tragically passed away in 2015 from a brain tumor at age 46, and Biden’s second son, Hunter, is 51 and an American lawyer. As Joe worked through what was surely a trying and difficult time raising two sons after the terrible accident that took his wife and daughter, he eventually found love again with Jill, and they had a daughter, Ashley Biden, who is now a social worker.

Biden told the Washington Post of the conversation he and his sons had about Jill, “Finally, Hunter spoke up: ‘Beau thinks we should get married.’” Biden replied, “‘What do you mean, guys? Beau?’ ‘Well,’ Beau said, ‘We think we should marry Jill. What do you think, Dad?’” Biden agreed, “‘I think that’s a pretty good idea,’ I told them. I’ll never forget how good I felt at that moment.” This just goes to show how important family is to Biden, and how their opinions and support can make all the difference. Despite all the pain Biden went through in his life, he continued to stay determined, and that got him to where he is today: not just a president, but a happy, loving husband and father.

Harris is the first Black and Asian-American woman to be vice president. Something that is not quite as well-known is that she is the author of three books. She graduated from Howard University, where she was in the sorority Alpha Kappa Alpha. Harris served on the Senate Select Committee on Intelligence, which deals with national security and international threats. She also served on the Senate Homeland Security and Governmental Affairs Committee, where she supervised the country’s response to natural disasters and emergencies. She has been the one to hold the Trump administration accountable on multiple occasions. Harris has worked hard to protect Obamacare, while also advocating for marriage equality for all. She has done so much in her career and is now taking on the incredibly important role of being VP.

Harris, like Biden, is family-oriented; she has a husband of almost seven years, Doug Emhoff. The two were also set up on a blind date much like the Bidens. The magazine Marie Claire reported that the morning after their first date, he emailed Harris: “I really like you.” Then, after about a year of dating, they got engaged; it was a private engagement, much like the wedding. They wrote their own vows, and to recognize Emhoff’s faith, the two honored a Jewish tradition and broke a glass. It was a family event, with her niece reading the poem, “Touched by an Angel” by Maya Angelou and Harris’s sister, Maya Harris West, acting as the officiant. Emhoff is very supportive of his wife and loves her very much, and Harris shares those same feelings. “I love my husband,” she once told Now This. “He is funny. He is kind. He is patient. He loves my cooking. He’s just a really great guy.” She is the stepmother to Ella and Cole who, according to Harris, are her “endless source of love and pure joy.” After her long months of campaigning, she said, “I can say one thing with certainty, my heart wouldn’t be whole, nor my life full, without them.” The two also affectionately call her “Momala,” and, according to O, The Oprah Magazine, she wore converse and brought cookies the first time she met them. Harris is the daughter of immigrants: her father immigrated to the U.S. from Jamaica to study economics and her mother emigrated from India. Her mother told her growing up, “Don’t sit around and complain about things, do something.” This is something that drives Harris every day and is part of what got her to where she is today.

In his junior and senior years of high school, Biden was elected class president, which showed his hard work because growing up in Scranton, Pennsylvania, and later in Wilmington, he was bullied because of his stutter. The class president accomplishment certainly paved part of his future. Although he was unable to run for student body president because he had too many demerits, in high school he also played football as a wide receiver and running back.

Harris’s mother gave her the name “Kamala” as a nod to her Indian roots. The name means “lotus” and is another name for Lakshmi, the Hindu goddess of wealth, fortune, love, beauty, joy, and prosperity. When Harris was just a child, she joined protest chants from her stroller while her parents marched for civil rights in Oakland and Berkeley, California. Following one march, Gopalan, Kamala’s mother, asked the toddler, “What do you want, Kamala?” Her response: “FEE-DOM!” It is no surprise she grew up to continue in her activism. Later, when she was thirteen, Harris and her sister, Maya, led a protest in front of their Montreal apartment building against the policy that banned children from playing on the lawn. The owners eventually reversed the policy.

Americans often get so caught up in the politics that they forget there are real people under the suits, ties, and power dresses—people who have a past, memories, and a life outside their responsibility to this country. Harris and Biden were ordinary people who chose to make a  difference by being dedicated and motivated. Who knows? In the future, that could be you.

Joe and Jill Biden along with Kamala Harris and Dough Emhoff wave on top of the steps of the capitol after their inauguration. photo courtesy of Carolyn Cole / Los Angeles Times