TJ Steps Up to the Plate 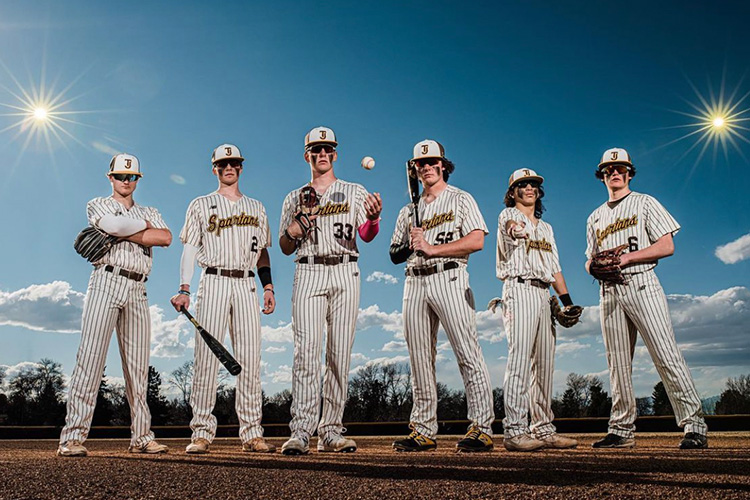 Baseball season is back, and the Thomas Jefferson players are back on the mound!

The sun is out, the birds are chirping, and Thomas Jefferson High School Baseball is in full swing! Almost halfway through the season, the beloved TJ Baseball team has been working hard to make their school proud. Mid-February, the players dusted off their gloves for tryouts and began practicing. By the beginning of March, the players had their positions on the team and officially began the season, starting off with a victory over Kennedy High School on the 14th of March.

Graham Baughn has been on the coaching staff for the TJ baseball team for eight years, this year being his sixth as the head coach. Because Baughn has been coaching baseball since 2010, he was excited to bring his skill set to TJ to form an incredible team for this season. This year, the varsity team is stacked with eight seniors, many of whom have been playing for the team since their freshman year. Much of this season has been focusing on efforts to advance the team’s techniques and less on fundamental skills. Baughn explained that this season is “a little bit different than the last couple of years,” because they now have a more advanced team, which has allowed them to also work on their team culture.

With all of the efforts to improve the team bond, it is clear that the TJ spirit has been flowing through the team. Tyler Hrin is a senior on the team who has been playing for varsity since his freshman year. So far, the season has been a meaningful one for him: “the little things from the season, like team lunches, practice, bus rides, will all definitely stick in my memory.” Many of the senior players have taken the younger players under their wing. Henry Shukert, a junior, stated “the support is widespread, everyone really makes each other better.”

The unanimous goal for the players, according to senior varsity player Kyle Hrin, is to “make and win the state playoffs,” and get the state championship. This dream has united the team and pushed them all to be their best. However, all Baughn wants is growth, as teams and as individuals. “As a team, we have the goal of a state championship, but that is really for the players.” Instead, he wants to “help them improve, see the players grow and be a person that they can rely upon.” Baughn has put efforts towards creating more than merely a baseball team, he has made it a family.

At the beginning of April, the team held a major fundraiser for pediatric cancer. During that game, they provided QR codes for people to scan and instantly donate to the group, Go4theGoal. The mission from the donations is to “improve the lives of children battling cancer by providing financial support, developing and implementing unique hospital programs, funding innovative research, and granting personal wishes.” The team donated $100 prior to the event and wore gold shoelaces in support of the cause for their game against Ponderosa High School, the defending 4A state champions. They brought a food truck for the loaded stands filled with parents, teachers, and students who were ready to donate.

This amazing season will be one that will be a hard one to beat, and for the seniors, it will be an emotional one to end. Tyler discussed that the end is “bittersweet for sure.” He added that “it is cool to be a veteran on the team and understand what the younger guys are going through, and ultimately help them through their struggles. However, it’s surreal to think that this is the last year I will be involved in the field with the program. I think that’ll really set in as we get towards the later stages of the season.” Nevertheless, the impact that TJ has had on these players will never be forgotten. They have made a name for themselves not only at TJ but within the whole baseball community.

The team is now halfway through their season of 23 total games. The next steps to their championship will be to win the regional round, then they will get to the state tournament. This tournament begins on the 28th of May, the weekend before memorial day. All of TJ is rooting for the team to take home the championship trophy!