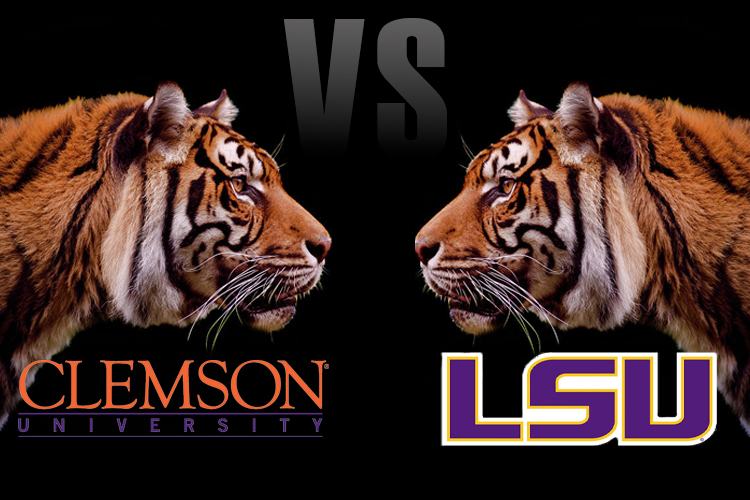 Louisiana State University and Clemson face off in the 2019/2020 NCAA College Football Championships.

On the night of January 13th, 2020, stadium lights beamed down on the Mercedes-Benz Superdome in New Orleans, Louisiana. On the field, Louisiana State University (LSU) and Clemson prepared to face off in the 2019/2020 NCAA College Football Championship game. The teams were fighting for the “undefeated” title as well as to be the NCAA College Football Champions. Although LSU was favored to win, they still had some competition from Clemson, who are three-time national champs and winners of last year’s playoff game against Alabama. Clemson coach Dabo Swinney commented, “We got a good team. I like my guys… They love each other.”

Both teams played highly successful seasons, entering the post-season playoffs undefeated and ready for a challenge. In the Peach Bowl, the LSU Tigers defeated the Oklahoma Sooners with a score of 63 to 28. On the same day, Clemson, whose mascot is also the tigers, defeated Ohio State in the Fiesta Bowl with a score of 29 to 23. In addition to their successful season as a team, LSU also saw individual success from their quarterback, Joe Burrow, who won the 2019 Heisman Trophy. The Heisman has been an NCAA football tradition since 1935 and is awarded to the most outstanding player of the year. The award is voted on by a combination of sports journalists, past winners, and fans. Prior to the playoff game, Burrow had 55 touchdown passes throughout the season. He was also awarded the Davey O’Brien Award, the Maxwell Award, the Walter Camp Award, and the Johnny Unitas Golden Arm award.

Clemson’s quarterback, sophomore Trevor Lawrence,  also had a successful college career, with much more to come. Coming into the playoff game, he had a game-winning record of 25 and 0 as a starting quarterback and had 36 touchdown passes.

In the game, LSU, coached by Ed Ogeron, won the coin toss and deferred receiving the ball until the second half. The first quarter of the game was largely a defensive battle. Clemson scored the first touchdown, kicked a PAT, and put seven points on the board. It looked as though Clemson might dominate the game. LSU’s Burrow was looking uncharacteristically rattled and the team could not get past Clemson’s defense. Towards the end of the quarter though, LSU came back and scored a touchdown, putting seven points up on their board. The first quarter ended with a tied score of 7-7.

The second quarter began with a 52-yard field goal from Clemson, which they quickly followed up with a touchdown. With Clemson taking a ten point lead, LSU kicked things into high gear, scoring three touchdowns, putting 21 points on the board. The second quarter ended with a score of LSU at 28 and Clemson at 17.

The third quarter of the NCAA College Football playoff game began with a touchdown from Clemson and a very impressive two-point conversion. Though this earned them eight points, they were still three points behind LSU. This was the most points Clemson allowed to be scored against them in the 2019/2020 season. They allowed LSU another touchdown, leaving the score of the game at LSU with 35 and Clemson with 25.

The fourth quarter was fairly uneventful. LSU, who was already in the lead, scored one final touchdown, putting the final game score with LSU at 42 and Clemson at 25 points. Both teams put up a good fight, which made for a very exciting game. In the end, though, LSU came out victorious, ruining Clemson’s 29-game winning streak and becoming the 2020 NCAA College Football Playoff Champions. The team’s hard work over the season paid off. “It’s all about the fundamentals,” commented coach Ogeron.