Welcome to the (Not So) Final Show 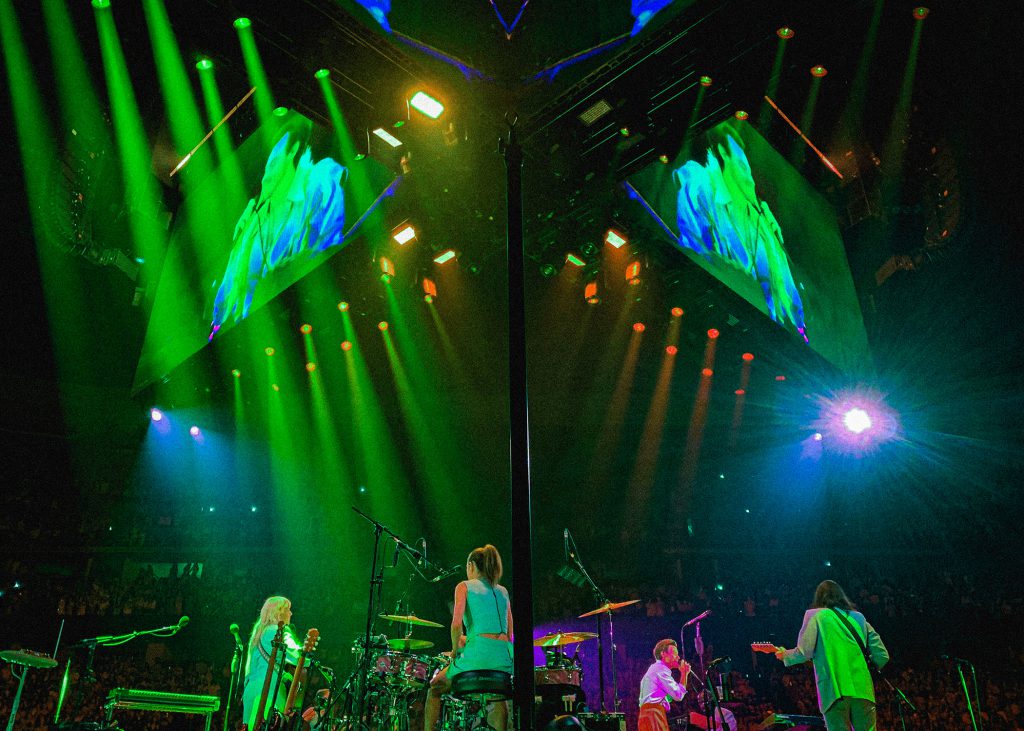 The Love on Tour band enjoying the crowd’s enthusiasm of being back on stage. photo by Sara Medina

As venues open up, live music makes an astounding return.

The screams that flooded the 675,000 square foot arena in Denver, Colorado, on September 7th will forever ring in the hearts of every person that attended the live performance of Harry Styles. For most people, Harry Styles Love on Tour was the first concert back from a two and a half year interruption, for myself as well. No words could describe how ethereal the entire night was, from how breathtaking the feeling of the ice-cold bars from the barricade felt to the contagious adrenaline rush that zapped through every body in that building. The tears that were shed that night hold different meanings behind each and every drop.

Before the show was even confirmed to still carry months before, I was intrigued as to how the tour crew and venues would work with social distancing in the general admission sections. I myself am no stranger to clashing into strangers while jumping to the beat of the song, but everything now-a-days have changed. I was worried I would not be able to get my old “concert-experience” back. I  always tried to keep up to date with the new rules and regulations that not only the Ball Arena, but other venues were posting, as well as keeping myself informed on the artist’s conditions.

The Ball Arena required vaccination and/or a negative COVID-19 test for all attendees who wished to enter. It came as a huge relief to have been under strict guidelines, such as required vaccination check, masks worn at all times, and maintaining a social distance when possible. An interesting thing that did occur at the twenty-seven year old’s live performance was a discount on all merchandise if you provided valid proof of vaccination. While Styles is the only person I have heard of making this choice, I think it is a beneficial one all around. Fans can save a few pennies if they are able to show that they are vaccinated and the artist has ensured that all people are safe. I remember while waiting in line for water, one of the VIP crew members kept repeating how “H” wanted us all to keep our masks on at all times. Certainly hearing them refer to Styles as “H” sent me into a frenzy, but also the fact that he was not only looking out for his crew, members and fans warmed my heart.

For many people, myself included, it was a never ending thought in the back of my mind that live music wouldn’t return any time soon when the pandemic first began. The feeling of arriving at the arena and waiting out the anticipation for the performance to begin never felt real. Even when Styles’ opening act, Jenny Lewis, came out twirling in her glittery-denim blue suit, the idea of being at the show didn’t feel real. To add to the feeling that this had all been some fever dream, I could only see half of everyone’s face. Yet, it had been quite entertaining to see how creative attendees got in styling their outfits to match their masks.

Nothing could ever compare to the feeling I got when the band emerged from the wings of the stage, removing their masks as they slotted themselves into their designated spots. I think the stage layout could not have been better. It was a large circle with two catwalks on either side, dividing the floor in half. The graciously large space gave the band enough room for each member to spread and rock out. Doing a full 360, not only were fans masked, but every other staff member whether they were employed through LaneOne, a ticket upgrade program, the Ball Arena, or the very hard working security staff.

Regardless of how people feel about a mask mandate, fans and concert-goers need to understand the importance and security behind it. For many it has been far too long since a live performance, but I know I will do whatever it takes to return back to the incredible feeling of enjoying live music.