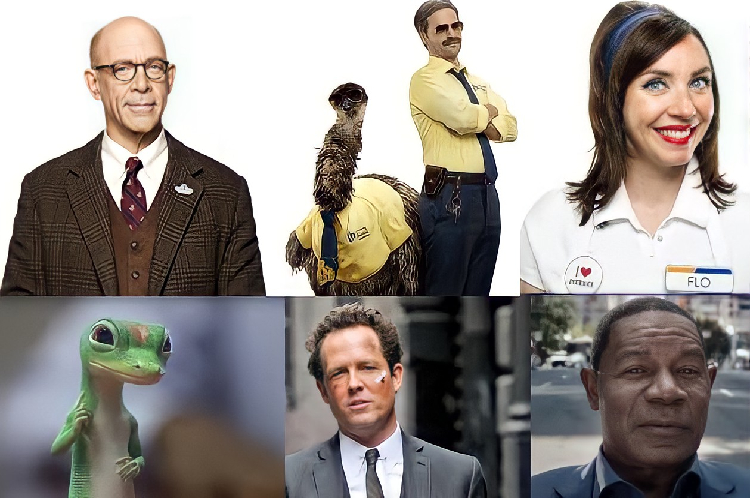 Above are some of the most recognizable mascots and figures in the insurance commercials. photo courtesy of Medium.com

The debate for the best car insurance company commercial is a competitive one with many factors, but one company outshines the rest.

Although claims, coverages, and collisions don’t exactly scream excitement, car insurance commercials are among the funniest in the advertising industry. The competitive industry has forced many companies to take huge steps in improving their commercial game. The top nine insurance companies spend roughly five billion dollars per year on creative insurance ads. Insurance companies often use humor, create a mascot, and hire famous people to build their brand and attract consumers. With all this funding and attention going into these commercials, the question must be asked: Which insurance company has the best advertising scheme?

Okay, I feel like the best way to go about deciding the best commercial is to break their advertising schemes into sections. The first place we’re going to start is with the slogans of a company. There is State Farm’s “Like a good neighbor, State Farm is there,” or the ever so iconic “Fifteen minutes could save you 15% or more on car insurance” from Geico. Despite having even more contenders, such as the rhetorical line, “Are you in good hands?” from Allstate, the crown for best slogan goes to The General. When these nothing short of cheesy commercials flash across America’s televisions, the audience can’t help but belt out the final line of, “For a great low rate you can get online, go to The General to save some time.”

The use of a mascot is a very common strategy amongst many companies, as it offers a memorable figure for consumers to connect with the company itself. A personal favorite mascot of mine is the chaos-ensuing Mayhem from Allstate suggesting that drivers should get Allstate in order to be protected from mayhem, like him. Another notable contender is the Aflac duck, who has greatly increased the company’s recognizability to consumers and even amassed 750,000 followers on Facebook. Flo from Progressive always brings her A game, as does Jake from State Farm. Despite this competitive realm, the easy winner is the gecko from Geico. His soft accent and witty comedy make the gecko a fan favorite amongst all ages, as he is arguably the most recognizable mascot of them all.

This section debates which insurance company has the best individual commercial. I think we all can agree that Nationwide has a great commercial with the former quarterback of the Denver Broncos, Peyton Manning. The quarterback sings things throughout the day in the same beat as the Nationwide jingle, such as “Chicken parm you taste so good” and “50 Omaha set hut.” Another personal favorite of mine is the iconic “hump day” commercial from Geico that ends by comparing the happiness of Geico customers to a camel on Wednesday. I could list another 30 spectacular commercials, but none would dethrone the greatest insurance commercial of all time. Yep, you guessed it: The original Jake from State Farm clip. State Farm hit the jackpot with this one, as American’s were quoting the commercial throughout their day. The commercial has the perfect balance of humor and relatability, while still portraying the great customer service the company has to offer.

When deciding which insurance company has the best advertising strategies, nearly a dozen come to mind, but one in particular outshines the rest. Geico has a clear edge over the competition when it comes to advertising. Their approach is effective because of how they create lovable characters, utilize humor, and end most commercials with simple yet witty one-liners. The company has been delivering some of the best commercials for decades now and shows no sign of slowing down. Through these decades of commercials, Geico has left America remembering that 15 minutes could save you 15% or more on car insurance.