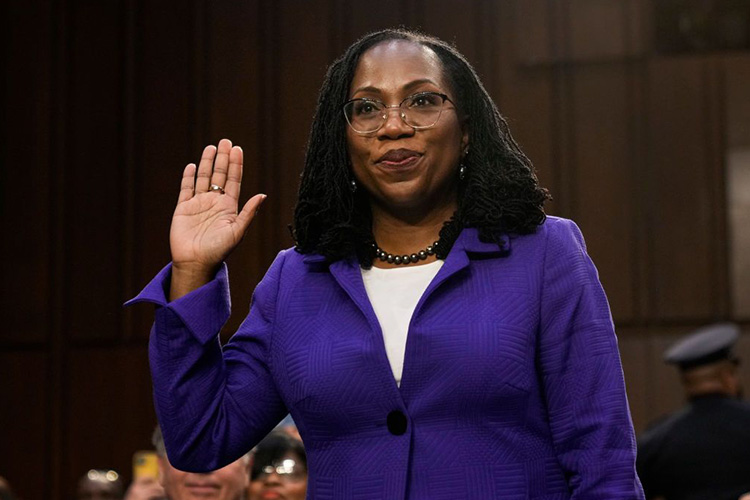 Judge Jackson makes history as she is sworn into the Supreme Court. photo by Drew Angerer

The U.S. Senate has confirmed Judge Ketanji Brown Jackson to the Supreme Court.

The United States Supreme Court was established in 1789 by the U.S. Constitution through the Judiciary Act of 1789, and was officially convened in 1790. Since then, the Supreme Court has only consisted of white men, black men, white women, and one Latinx woman, but not one single black woman. That was until April 7, 2022. Judge Ketanji Brown Jackson, who will become the 116th justice, made a mark within U.S. history by becoming the first black woman to join the Supreme Court Justices.

Judge Jackson, 51 years old, is a Harvard University graduate for both undergraduate school and law school. Jackson’s careers included reporting for Time magazine, acting as a clerk for Judge Patti B. Saris in Massachusetts, then clerking for a judge in the U.S. Court of Appeals, opening her own practice in Washington, D.C., then going back to be a clerk for Supreme Court Justice Stephen Breyer. After many more career switches, she was nominated by President Joe Biden to replace her former colleague Stephen Breyer in the Supreme Court.

The Supreme Court currently withholds six republican justices and three democratic justices; Breyer, one of the three democratic justices, is Jackson’s true mentor as she hopes to continue his motivation and integrity once sworn in. This is anticipated to take place in late June or early July once Breyer officially retires. Despite Jackson having an unusual waiting period after being confirmed to join the Supreme Court, the waiting period will feel like no time after the 232 years it took to reach this monumental milestone in United States history.

President Biden’s nomination of Jackson continued the trend of fighting for equality and representation. Now, Jackson will be the 6th woman and 4th black person to be serving on the Supreme Court. Despite the President’s consistent support of Judge Jackson’s career, she did face many harsh opponents, Senate minority leader Mitch McConnell being one of them. McConnell’s resentment towards Biden began long ago, prominently reappeared when Biden chose Kamala Harris as Vice President, and is showing again as another black woman makes history in the United States. McConnell believes that “the Biden Administration is [letting] the radicals run the show,” as reported by the New York Times. His critiques started after Jackson’s nomination hearing, when he confidently stated that he “cannot and will not support Judge Jackson for a lifetime appointment to the Supreme Court,” according to Colombia Broadcasting System (CBS) News. Although opinions mean everything in politics, the opposing ones did not seem as significant as the supporting views, as Jackson won confirmation with the votes being 53-47 in the Senate, with three republicans joining all 50 democrats.

For 232 years and 115 justices, the Supreme Court has had 108 white men, six women, two black men, and one latinx woman. Finally, the 116th justice is a black woman. As stated by First Lady Michelle Obama, “So many women of color now have a new role model to look up to as [Jackson] serves on the highest court of the land.” Future Justice Jackson’s resilience has paved the way for many young black females in America who hope to achieve something similar.