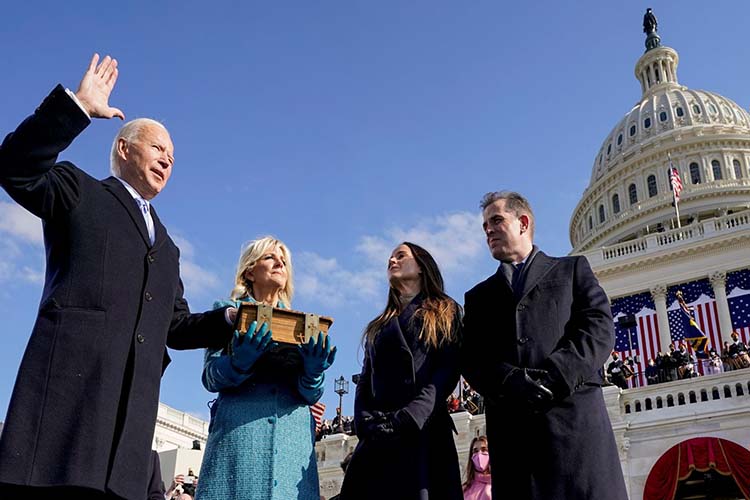 President Joe Biden is sworn in as the 46th president of the United States as Jill Biden holds the Bible as their kids Hunter and Ashely stand next to him. photo courtesy of Sky News

Biden’s first year in office started with a global pandemic, a capitol insurrection, and a divided nation.

The year 2021 began with quite a frenzied, unforgettable bang. On January 1st, as the world rang in the New Year in isolation, it was reported that the U.S. officially surpassed 20 million cases of COVID-19. On January 4th, Georgia’s election officials dismissed any reasonable cause of voter fraud, as proclaimed by former President Donald Trump. On January 6th, Raphael Warnock was elected to Georgia’s Senate, becoming the first black senator in Georgia, followed by the election of Jon Ossoff, the first elected Jewish senator in Georgia. Only hours later, former President Trump’s rally turned into a violent capitol insurrection, with more chaos to follow. Finally, on January 20th, President Joe Biden was officially inaugurated on the West Front of the United States Capitol. It has now been a year since Biden took his throne in the oval office; what has Biden achieved in those 365 days?

Following Trump’s presidency, Biden was left with a divided nation gagged by political polarization, abandoned deals, and withdrawals. Biden campaigned on mending these broken ties and set out to do it instantly. He quickly rejoined the Paris Climate Agreement and the World Health Organization, and also resumed ties with Palestinian Authorities. He then reversed the transgender military ban, rescinded the Muslim travel bans, and reversed family separation policies. More recently, Biden pushed and passed the trillion-dollar Bipartisan Infrastructure Bill. This is a monumental bill that will put spending towards roads, bridges, expanding broadband access, and more. Not only is this a gigantic bill, but it was passed with the help of bipartisan Republicans. This was a tremendous success for the Biden administration; forging the relationships between the two parties was something that Biden had campaigned for, and the passage of this bill was a huge feat.

It is not every day that a president is inaugurated during a global pandemic, so needless to say, Biden was not dealt the best hand of cards. Stepping into office, the Biden-Harris administration promised to expand testing, attempt to safely reopen schools and businesses, give support to lower-income communities, and launch their vaccination program. Thus far, his administration has kept its promises; since May, COVID-19 vaccines have been available to those 12 and older and vaccination campaigns have been in full force. The White House reported that “these efforts—and countless other Administration initiatives and policies—have resulted in over 175 million fully vaccinated Americans. But there are still nearly 80 million Americans eligible to be vaccinated who have not yet gotten their first shot.” While 75% of the United States is vaccinated, the country still trails behind other countries, despite having more resources.

This past December, the President announced further action to help “get shots in arms,” support hospitals, and reduce the spread of Omicron, the latest variant of COVID-19. Biden has stuck to many of his promises and has not given up in the battle against COVID-19. Going back in time to September of 2021, Biden acted on one of his promises but stained his presidential legacy. Biden had promised to end “forever wars,” and had promised to get all troops out of Afghanistan by 9/11/2021, to officially end this 20-year war. With the Taliban capturing more than 10 of Afghanistan’s capitals, Kabul was one of the only urban areas under governmental control. The withdrawal of troops was a grim display of fear of terrorist rule and panic. Families attempting to flee, especially women, feared that under Taliban rule they would no longer be allowed to work or study. Kabul was the center of this chaos, with desperate crowds attempting to force their way onto one of the few departing planes, some latching onto the sides of military planes as they took off. Polls found that while many Americans approved of the withdrawal, the majority did not approve of how it was handled. Biden admitted that “this did unfold more quickly than we had anticipated,” yet still defends his decision to exit Afghanistan.

Nevertheless, when looking at Biden’s presidency in the history books, this withdrawal will be a notable chapter. Heading into the midterm elections, the next strides Biden takes will be paramount to his success. His actions will be critically watched and will determine who takes control of Congress for the remainder of Biden’s term. With a hectic year, and three more to go, President Biden has undoubtedly made an impact with his first 365 days in office.