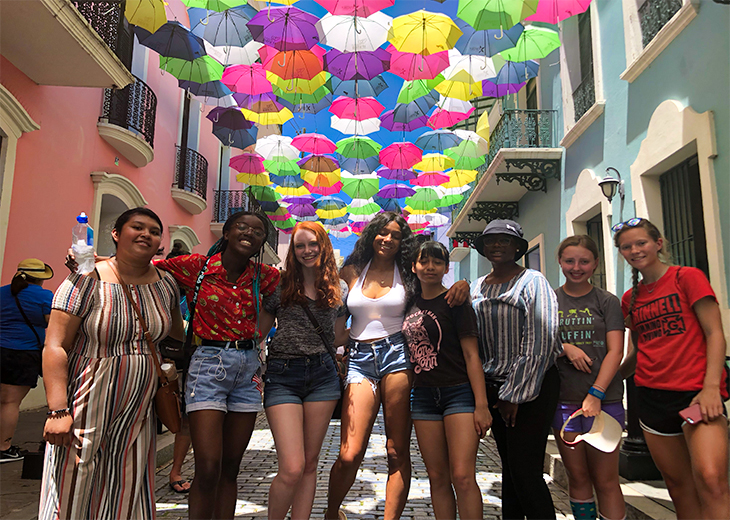 2018-2019 Challenge 5280 2nd place winners and TJ alumni Logan Cecil, Malia McDorman, Joe McComb and current members senior Mariah Hurd-Crews, junior Ivonne Hernandez, senior Phoebe Briney, junior Ava Ward and junior Jael Iyema earned a seven-day vacation in San Juan, Puerto Rico. Last year’s project was focused on sexual harassment education and prevention. Through research and student survey, the team discovered that 69.7 percent of students have never taken a class that educated them on sexual harassment and prevention, which required a major culture shift. The challenge 5280 collaborated with the administration on how to implement Denvers’ only sexual assault prevention and support center: Blue Bench, Bringing in the Bystander and the One Love programs into the following school years. By integrating the Bringing in the Bystander curriculum into every physical education class and sport, at least 90 percent of TJ seniors will have a class addressing sexual assault and harassment by 2022.

The prize for last year’s champions was a trip to 4390, Puerto Rico. Thanks to Denver Public Schools (DPS)  Student Voice and Leadership, Venture Road, Solicia Lopez (Curator of the challenge 5280) along with other 5280 coordinators for organizing the trip so it was possible for 42 teens attending high schools all across Denver like East, Montebello, Denver School of Innovation and Sustainable Design (DSISD) and Kunsmiller Creative Arts Academy (KCAA) were able to have the time of their lives in San Juan. Challenge 5280 coach and English teacher Andre Moss commented, “It was awesome because throughout the whole year I got to see the work and effort that these students put in, and to see that hard work pay off with a win was super special.” Senior Mariah Hurd-Crews enthused, “We had an incredibly strong team last year, each member knew someone who had been sexually assaulted, and the ‘Me too’ movement was also happening. It was important for us to figure out how we could prevent sexual harassment in schools.”

The first couple of days of the trip were spent exploring and familiarizing themselves with the rich history and sights of Puerto, such as Castillo San Cristobal, (the largest fortification built by the Spanish in the New World). The third day was spent volunteering at YMCA De San Juan their first service-learning site. All 42 students were split into groups and some spent time with children in the toddler division, while others played racquetball with children seven and eight years old, swimming with children ages five and six years or playing sock puppet theater with hyper nine-year-old kids. The most memorable part of the trip to junior Jael Iyema was getting to know the children she sang and acted with. The children nicknamed Jael “chica de pelo azul,” (the blue-haired girl)  because of her unique blue box braids.

The second service learning project students did was stocking food at Banco de Alimentos, San Juan. They spent the morning stocking and storing food and the afternoon cleaning and talking with the leaders about the families in Puerto Rico who live in poverty and learning about how the food is distributed to them. While others complained about the humidity and incredibly annoying mosquitoes, “chica de pelo azul” found herself comfortable. The indescribable feeling of home and belonging took over her body because, the culture, the people, and the food reminded her of her African home.

On the second to last day of the trip the change makers went to Viejo San Juan, better known as Old San Juan. The tour guide and chaperons reminded them why 42 social justice warriors came to San Juan in the first place: to extend their learning and be able to spread the message to families, friends, and other young activists like themselves that Puerto Rico is a part of the United States and should not be forgotten in their movements, conversations, and activism.

TJ’s challenge 5280 is grateful for the experience they had in Puerto Rico, and will forever cherish the memories and friends they’ve made during the trip. This year, TJ’s challenge 5280 welcomed three new members to the team: junior Abby Mulligan, junior Skylar Veiner and sophomore Georgia Hartley, and plan on finding other ways to implement the lessons they’ve learned in Puerto Rico into their policy.