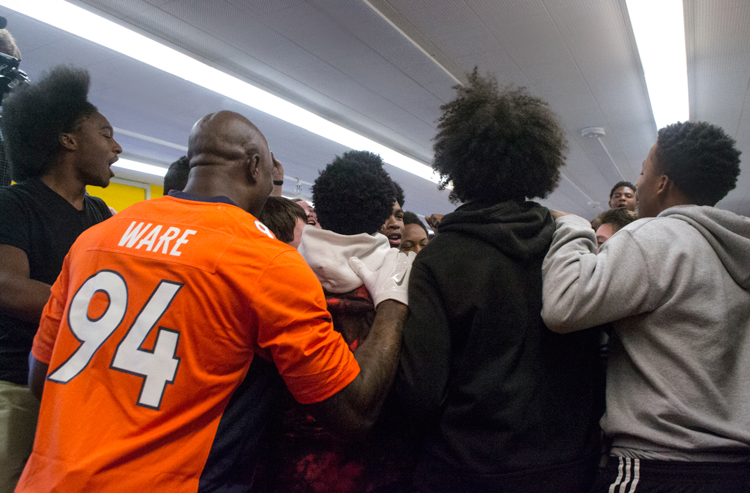 One of the most significant influences upon high school athletes can often be found in professional athletes; these experts can offer an example to live up to, and advice to hardworking student athletes. As Thomas Jefferson football players looked forward to Winter Break, they received a special surprise, offering them inspiration and thoughts to carry them through their off-season, through the visit of famed Broncos player DeMarcus Ware. On Tuesday, December 8th, in addition to providing a stellar pep-talk and kind words to TJ’s players, Ware also presented an abundance of new equipment to TJ’s football team, leaving many players already eager to begin the new season.

Many may wonder how a high school was able to capture the attention of a professional football player, let alone procure a visit from him. Surprisingly, however, it was the sports network Bleacher Report, along with the Denver Broncos, that contacted TJ Athletic Director Andrew Skari. “I was contacted by the Bleacher Report about an opportunity,” Skari explained, adding that the Broncos gave the Bleacher Report TJ’s name as a result of the school’s involvement with the Futures Football Program. “We really take the Futures Football Program seriously,” said Skari, “and we are really appreciative of the work that the Broncos do for us, so this was kind of a ‘thank you’ for some of the work that we have done on our end.”

Upon setting up the meeting with Ware, the difficult part became keeping it a secret from the football players. “It’s the offseason, and a lot of [the players] will catch that bus home right away,” Skari described, “so I needed to make sure that they knew it wasn’t anything serious, that they wouldn’t want to miss it.” Fortunately, it appeared that almost every player was present for the meeting, which was a relief to Skari and the coaches. In addition to keeping the big secret from the players, space was also necessary to film an interview with Ware, as well as to keep him hidden from the students. This space was graciously provided by TJ business teacher Danny Showers, who offered his classroom up for the day of the meeting.

To add to the mystery meeting, Skari started off by discussing a new recruit for TJ football, describing the player as a 6’4” transfer from Dallas, and then proceeded to call out for Ware. Initially, the player was unrecognizable, dressed as a TJ football player, and the atmosphere was tense – no player enjoys looking at a possible replacement for his position. However, as Ware removed his helmet, the players realized that they were looking at a Bronco. “My only worry was that the kids wouldn’t be excited,” Skari admitted, “but when the room erupted, that was the pressure off my shoulders.”

As Ware began speaking, another surprise was revealed to the team; Sports Authority and the Broncos had collaborated to donate a large amount of new and necessary equipment to TJ. Many factors can make acquiring new equipment difficult for high school teams, especially football, with the large amount of players. Thus, this gift from Ware was a relief for both players and coaches. Alongside the new equipment, Ware also gave some of his own equipment to TJ students, including his gloves and cleats, all of which he wore during the meeting. “One of the kids on our team asked for his cleats,” explained junior and Varsity football player Justin Vigil, “and he said yes and started signing them. So I thought maybe I should ask him, because this is a once in a lifetime chance. So I asked him for his gloves, and he took one off and signed it for me.”

Along with the new equipment, Ware talked to the football team about his own career, and how he began in an environment much like that of TJ. He described the hard work that he put into the sport, and stressed to TJ’s players that success is possible with consistent effort. “It’s a great feeling that someone would take time out of their day to come talk to us,” confirmed junior and Varsity Football player Dane Washington. “It was very inspirational, and it makes me want to work harder so that I can have those opportunities as well,” he added.

Ware emphasized that he understands the struggles that many high school athletes face, and that he wants to be there to inspire and assist them in any way that he can. He even recounted his own meetings with famous athletes as a high schooler, and the feeling of gratitude and motivation he felt upon hearing them talk. These interactions have made him want to continue the cycle – he is successful today partially because of the impact made upon him by his own idols, and he would like to be that idol to others now. In addition to his advice on hard work, Ware had a final piece of advice: “Don’t let perception kill your dream,” he said, adding that young athletes are often faced with cookie-cutter standards. “Use what you have to get to where you need to be,” he stressed.

The meeting was a huge success: the football players were able to get autographs from Ware, along with a quality pep-talk and a fun and memorable afternoon. “I get such a kick out of seeing our kids happy,” Skari described. “Football has been tough, I’ve seen them go through struggles, and this was a good thing for them.” It is clear that Ware’s visit gave the team much needed encouragement and motivation, which will surely lead into an exciting season next year.