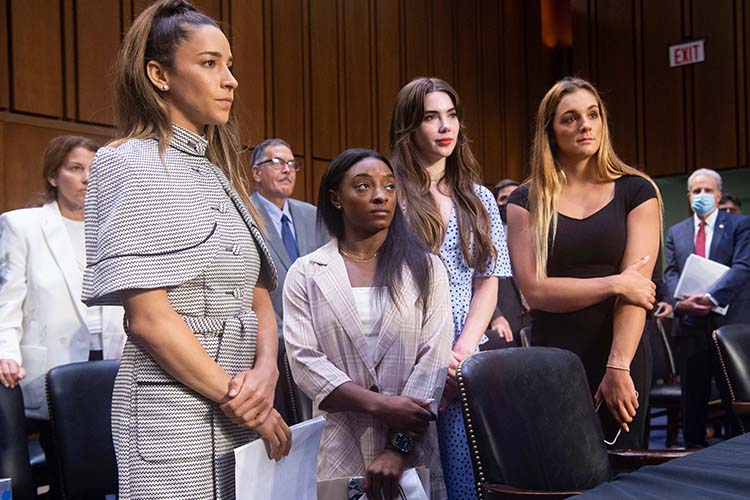 The four women who continue to stand together against the abuse they faced from Larry Nassar, the FBI, USAG, and USOPC; (from left to right) Aly Raisman, Simone Biles, McKayla Maroney, and Maggie Nichols. Photo Credit- The Hill

The Olympic gymnasts testify how the Federal Bureau of Investigation mishandled the infamous Larry Nassar case.

On September 15, 2021, Simone Biles, McKayla Maroney, Maggie Nichols, and Aly Raisman took the stand in front of the US Senate about the mishandling of the Larry Nassar case by the Federal Bureau of Investigation, USA Gymnastics, and United States Olympic & Paralympic Committee. Through their testimonies, the American public learned how one of the most prolific child predators was allowed to operate and abuse 100 more girls over a year after Nichols made the first statement against him. Though Nassar was sentenced to life in prison, this hearing showed that the FBI illegally falsified reports made by survivors, while USAG and USOPC covered up for Nassar. Though multiple pieces of evidence were presented by the survivors and the Office of Inspector General’s (OIG) report, the public still has several critical questions: what kind of criminal misconduct occurred, why did these agencies not take action, and how can this benefit survivors?

The OIG’s report that was recently released demonstrated evidence of the FBI’s errors in this case. According to PBS, the inspector general’s investigation established that “FBI officials in Indianapolis did not respond with the ‘utmost seriousness and urgency that they deserved and required.’” This notion was then supported by Maroney’s opening statement in which she said, “I thought given the severity of this situation, that they would act quickly for the sake of protecting other girls. But instead, it took them 14 months to report anything.” All of the women brought up these 14 months multiple times because of the inspector general’s evidence that Nassar abused at least 40 more women and girls during that time frame.

However, according to the women and the OIG’s report, the lack of urgency to begin an investigation is not the only fallacy made by these organizations. The FBI falsified statements, and USAG concealed the absence of an investigation from survivors. According to Nichols, she and her family were lied to about the existence of an FBI investigation. “After I reported my abuse to USA Gymnastics,” she states, “my family and I were told by their former president, Steve Penny, to keep quiet and not say anything that could hurt the FBI investigation. We now know there was no real FBI investigation occurring.” According to the OIG’s report, it was not until a year after Nichols placed her first complaint against Nassar that the FBI began investigating. As stated by Maroney, “According to the OIG report, about 14 months after I disclosed my abuse to the FBI, nearly a year and a half later, the FBI agent who interviewed me in 2015 decided to write down my statement, a statement that the OIG report determined to be materially false.” These pieces of evidence and statements exhibit the misconduct of the FBI as well as USAG.

Also called into question during the hearing was the treatment of the survivors. Raisman states that an FBI agent “diminished the significance of [her] abuse, and made [her] feel [her] criminal case wasn’t worth pursuing.” Maroney recounted her call with an FBI agent discussing the first time she was sexually assaulted by Nassar; “They asked if this treatment ever helped me. I said, ‘No, it never did. This treatment was 100% abuse and never gave me any relief.’”

Another inquiry raised by this report and hearing is why did these organizations make these decisions? “Why are we left to guess while USAG and USOPC deliberately ignored reported abuse? Was it to protect the value of the sponsorships? The LA28 bid? Their own jobs? To avoid criminal liability? Perhaps, but why must we speculate when the facts are obtainable, and the stakes are so high,” Raisman speculates inside her opening statement. Though the reasoning behind these actions cannot yet be defined, there is a consensus that the FBI, USAG, and USOPC must be held accountable. As Biles states, “If they are not, I am convinced that this will continue to happen to others across Olympic sports.”

Having the FBI, USAG, and USOPC take accountability will significantly decrease the chances of this negligence and abuse happening again and help show how the public is adding to rape culture and how this type of behavior is detrimental to victims. During the questioning period of the hearing, Senator Booker asked the panel, “Is there something you’d like to say to us, whom all have to understand that we are playing a part in a culture that allows this to happen?” Raisman responded with, “I think it’s important for people to understand how much, even if we’re not crying, how much we are all struggling and how much survivors are suffering, because people often say, well, why did you just come forward now? Because it’s terrifying to come forward.” This statement made by Raisman echoes those made by multiple sexual assault and abuse survivors in the past. The continuous demonstration of the lack of protection and care for these survivors on a systemic level is precisely what silences victims and their voices.

All survivors of sexual abuse hope that they will be helped by those who swore to protect them. Sadly, in this case, and many others, the agencies put in place to support and care for these women failed. Nevertheless, with blame and responsibility being placed not only on Nassar but also on the bureaus that perpetuated his abuse, a possible new system is beginning to form.