A Decision to Save Lives 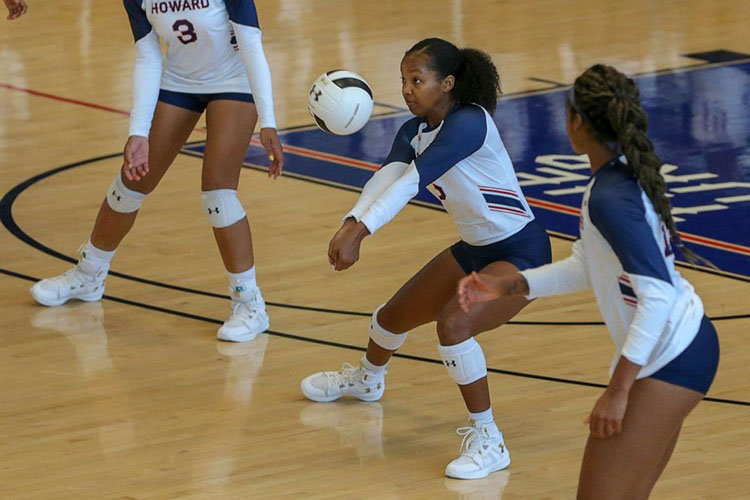 After four years of volleyball, Jurnee Farrell misses a tournament to save a life. photo courtesy of Howard University

Be The Match is an organization that aims to find bone marrow matches for patients with terminal blood cancer. Thousands of people every year are diagnosed with life-threatening blood cancers such as leukemia and lymphoma. Although a bone marrow transfer may cure this, it can be incredibly difficult to find a match.  More recently, Be The Match has been searching for more diverse donors in order to increase the chance of finding a match for patients. African Americans specifically only have a 23 percent chance of finding a match in these situations. Donations are one of the determining factors on whether the patients live or not. This is one of the reasons why former Spartan Jurnee Farrell decided to miss her final volleyball conference to save a life.

Farrell has spent all four of her college years at Howard University on the volleyball team. During her sophomore year, Be the Match encouraged students to register to become possible donors. Coach Shaun Kupferberg urged his players to apply and Farrell accepted. Two years later, Be The Match contacted Farrell unexpectedly informing her that she was, in fact, a match to a 57-year-old woman with Acute Lymphocytic Leukemia. This form of leukemia progresses very quickly and, if not treated, could prove to be fatal within months. Farrell and her mother were given the news in August of 2019 after the organization worked tirelessly to contact both of them. Farrell stated that she, “remembers having a two-hour conversation with [her] mom and the coordinator.” From September through November, Farrell had to have 30 vials of blood tested to confirm that she was a match for the woman whom Farrell opted to refer to as “GRACE.” Starting on November 15th, Farrell was given an injection of  “filgrastim” to encourage her bones to create more stem-cells to be released into her bloodstream. She went through this process for four days preceding the transplant and received the last injection needed on the day of the transplant. GRACE began chemo and radiation treatment to kill off her immune system and remove the diseased stem cells the same day as Farrell began receiving her injections. If Farrell had backed out of the transplant after GRACE began chemo, she would have passed quickly, though in the words of Jurnee’s mom, Tracy M. Farrell, “we had her back the entire time, Jurnee had no intention of turning around.” On November 19th, Farrell sat for four hours as her blood was drawn from one arm into a machine to separate the stem cells and returned the rest through her other arm. Within 24 hours, GRACE was given Farrell’s stem-cells and she will remain in isolation for 90 days after the transplant in order to allow the cells to rebuild her immune system. Within eight days Farrell was fully recovered and even got the chance to witness her team win the conference as she sat on the sidelines.

It’s understandable with all that came along with being a donor there would be a lot going through one’s mind. “I think at times I was definitely nervous, I remember sitting studying for an organic chemistry test and thinking, oh my God I’m doing this in a week,” Farrell reflected. These nerves mainly came from the unknown reaction that her body would have to the transplant as she had never experienced a big medical appointment like this before. It was difficult for Farrell to fully connect to the whole situation, even with the many adults around her who reminded her that she was saving someone’s life. She had not wanted to get too attached to the situation or even to GRACE with the fear that something might go wrong. “I didn’t want something bad to happen to her and then question what could I have done better,” explained Farrell. Since the 15th, Farrell has had the opportunity to send a letter to GRACE. She’s having a hard time determining what she wants to say, especially when she can’t disclose any part of her identity. For now, Farrell is continuing to rely on the information she currently has in hopes that GRACE’s recovery is going well, though Farrell’s coordinator reassures her that no news is good news for now.

Farrell went through much more than just the transplant; she’s also been dealing with the onslaught of media outlets currently telling her story. On the same night that she began the injections, Farrell’s volleyball team was holding their Senior Night in which they typically go over the year’s statistics and more. Instead, Farrell opted to talk about Be The Match and what they did to help others in need. After this, everything seemed to blur together as her story began to pop up on the local ABC news channel and kick-off her story to news channels from all over. It all came as a surprise to her as she said, “I don’t know how this happened I truly have no idea, I woke up one morning and my phone was blowing up.” At first, it was odd to her and she hoped that others would not think she continued with the transplant because she thought it would go viral. “I was just doing it because I had the chance to do it and it was really cool.” Through all of this, Farrell is grateful that she was given a platform in which to spread the message and encourage others to sign up to be a possible match for someone. Since her story hit the news, 684 people have registered with Be The Match, which speaks to the power of Farrell’s experience.

It’s been nearly a month since the transplant and Farrell has been back to her usual routine. She finished up her finals and is spending her holiday vacation in Colorado with her family. The entire experience was extremely educational for Farrell and she says that would do it all again, though for now, she is just going to enjoy her vacation.