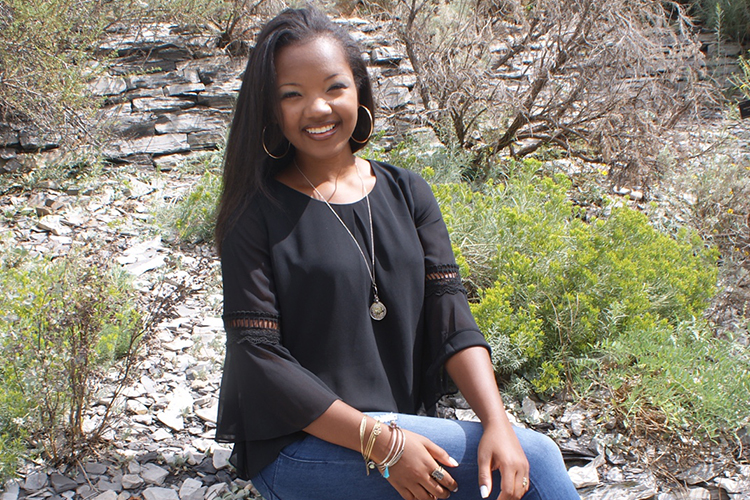 Thomas Jefferson Senior reflects the identity of a Spartan with her widespread participation.

Thomas Jefferson senior Jurnee Farrell has exemplified the true definition of what it means to be a Spartan. Through participation in volleyball, National Honors Society, strong academics, and other leadership programs, Farrell has developed key leadership abilities, which she hopes to pass on others and use to help her continue to excel in the future.

Perhaps most students recognize Farrell when she is playing volleyball, as she has passionately represented TJ on the court since her freshman year. Over the course of her four years, Farrell has obtained some of her most cherished memories while forming a close camaraderie with many of her teammates. She notes that much of her enjoyment obtained through volleyball is not just due to the game, but the ability to play alongside her teammates. She further mentioned that having a close relationship with the entire team allows her empathize with every player and provide them with leadership advice when needed. Farrell strives to be “a leader on the court with a great attitude and use what I’ve learned since I’ve been playing with younger girls.” Farrell certainly has the credentials of a leader, as evidenced by her impressive play over the years that includes helping TJ become the first DPS School in nearly four decades to qualify for the state competition. Farrell also points to volleyball as an important factor in her academic achievements, mentioning, “it has driven me to balance multiple things at once because without good grades I wouldn’t still be playing.”

In addition to her participation in volleyball, Farrell also dedicates much of her time to the community through the National Honor Society. As a member of NHS, she has given several hours of her time to volunteering with various charities and nonprofit organizations. NHS has taught her more than just what it means to give one’s time; it has provided her with examples of how to be a leader within the community. “I have developed a higher level of confidence and a better understanding of the things that I should be grateful for because not everyone has that.”

Farrell also applies herself away from TJ, as highlighted by her participation in a leadership conference this past summer at Princeton. In order to attend, Farrell had to treat the conference as though it was a college application. She had to answer general application questions, write an essay, and go through a personal interview prior to acceptance. While at the conference, she wrote essays and completed challenging activities with other high achieving students from around the country. She also greatly benefited from collaborating with speakers who taught her how to push oneself to new goals and aspirations that  may have not have been originally thought possible. Furthermore, speakers urged students to stay committed to their future aspirations so that they can organize career goals and set personal goals. Farrell mentioned that working in groups allowed her to better develop team management skills which the speakers stressed was critical in future success.

In addition to her remarkable experiences at the conference, Farrell took away meaningful lessons that she hopes to apply to her senior year and her further studies in college. She mentioned that the conference taught her “that to be a leader you don’t always have to follow other people’s rules, but live by your own,” later adding, “ being successful is based upon your willingness to live up to your full potential and it’s better to be a leader than a follower.”

Through volleyball, NHS, and her Leadership Conference, Farrell has been exposed to influential individuals who have taught her how to succeed. She is thankful for the unforgettable memories. As she prepares to make the next jump after high school, she is ensuring that she leaves behind an aspiring legacy, one that will also allow her to excel for years to come.