A Flamboyant Figure in Fashion 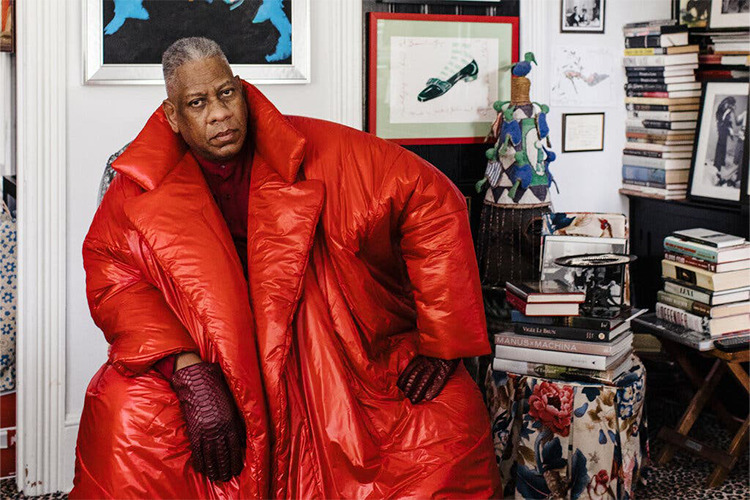 Andre Leon Talley in his home in New York. photo by Ike Edeani

The former editor-at-large of Vogue magazine, Andre Leon Talley, left a mark on the fashion industry with his recent passing at the age of 73.

On January 18th, 2022, the fashion industry lost a true legend. Andre Leon Talley tragically passed away in his home in White Plains, New York, due to a heart attack. Known for his tall stature and flamboyant style, Talley was an extravagant man who was able to work his way up at Vogue magazine and had many great accomplishments throughout his career. As a result, Talley left a lasting impression on people all across the world of fashion.

Coming from humble beginnings, Talley began his journey in fashion as a teenager when he spent a great deal of time at the library reading the latest edition of Vogue. He not only gave credit to Vogue for his eccentric and flamboyant sense of style, but also to his grandmother, who raised him. Talley grew up in Durham, North Carolina, while the South was segregated. As a result, Talley faced a great deal of racism growing up, and some of these challenges continued throughout his career. To Talley, Vogue magazine served as an escape from his day to day problems. Later in life, Talley told NPR, “[Vogue] was my gateway to the world outside of Durham.” After Vogue proved to be a valuable way to help him learn more about the world of fashion outside of his hometown, it was no surprise that Talley began working his way up in the industry.

It may seem hard to believe, however, that Talley’s original plans post-college had nothing to do with fashion. He earned a scholarship to attend Brown University where he majored in French with the hopes of becoming a French teacher like his role model from junior year of high school. Although it is unclear why Talley did not pursue this dream, it all worked out for the best when he discovered his true passion for the world of fashion. Once he graduated from college, Talley worked a couple of jobs and eventually moved to New York City in the 1970’s, where his career really took off. After a random encounter with Carrie Donovan, who worked for Vogue at the time, Talley was able to secure a job working at the Metropolitan Museum of Art’s Costume Institute. Through this job, Talley was able to meet many amazing designers as well as build connections with other important people in the industry. He once said, “I love people – it is not the fashion, it is the people in fashion I love.” One person Talley connected with was none other than Anna Wintour, the editor-in-chief of Vogue. Talley and Wintour had a great friendship for many years, and they both learned from each other. Unfortunately, the two of them had a falling out later in life; however, it was because of these experiences that Talley was able to get a job at Vogue magazine and work his way up in the ranks.

Many years later, Talley became the first African-American Creative Director and editor-at-large of Vogue. His position at Vogue and his notable style are what made Talley so special in the industry. Standing at six feet and six inches tall, he became widely known for his abnormal height as well as the large and extravagant capes that he wore. His unique sense of style set him apart at Vogue, so it came as no surprise that he was well known and loved by many all over the world.

Flash forward to today, Talley is beyond missed by the fashion industry. It seemed that his health had been declining for a while, but his death still came as a shock.. Talley achieved many amazing things in his lifetime, including being the first African-American Creative Director and editor-at-large at Vogue magazine, and developing an out of the box sense of style. Although he has passed away, this larger-than-life Vogue editor will never be forgotten.