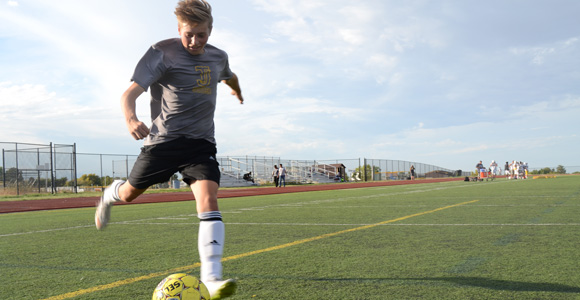 Kuetzel embraces his new home, on and off the field. photo by Sasha Mesropov

German exchange student, junior Paul Kuenzel, is taking TJ by storm as he joins varsity soccer and integrates himself into the community, demonstrating the great qualities of being a Spartan. Coming from Hamburg, Germany, Kuenzel is a long way from home, but is quickly forming his own home here in Denver. With a loving host family and new friends, he is extremely happy to begin a new adventure at TJ.

Having arrived in August, Kuenzel courageously prepared to stay for ten months to adjust to life in a new country. Going through an academic exchange year in the U.S. is often difficult for some, but not for him. Kuenzel stated, “Actually, it was quite easy to adjust here.” In addition, he claimed the contrasts between cultures are present but easy to overcome despite the fact that he has only been here for about a month. With help from his family and the TJ community, the transition was easy and welcoming.

Kuenzel came to the U.S. through a Germany based program called Experiment. This organization gives German students an opportunity to attend their choice of high school for ten months in areas such as Africa, Asia and the Pacific, Europe, and North and South America. Experiment offered many places for Kuenzel to explore; Miami, Seattle, North Carolina and various others in the country.  Experiment is one of the oldest exchange organizations in Germany, with over 80 years of experience and success. Students involved in exchange programs are able to come away with invaluable new skills, connections, awareness, and knowledge that helps them to thrive and lead in diverse intercultural environments.

Since applying for the program last fall, Kuenzel was required to fill out extensive paperwork and attend meetings to learn about the U.S and be prepared for this long adventure. When Kuenzel arrived here, the first thing he noticed was that, “Everything in the U.S is so big… ” Many differences exist between Germany and the U.S.; for example, in Denver people have more space to live their life because of the lower population rate. Growing up in Germany, he has had many opportunities to excel and went to a unique bilingual school which is part of the reason why Kuenzel can speak English so flawlessly. Starting in third grade, he has studied English for eight years now which is an incredibly handy skill to have, especially when planning to live in another country. When choosing Denver he remarked, “I like to ski and I heard that you can do that quite well here, and I chose Denver because I am used to living in a big city and I thought I would like to continue living like this.” So far, he has no regrets, which can partially be attributed to the glorious mountains residing in our state. Kuenzel enjoys not only skiing, but riding his bike, going to school, meeting with friends, and reading books.

Additionally, Kuenzel has joined TJ’s varsity soccer team, and is changing up their community. Fellow teammate and senior Franz Torres stated, “Paul is the best,” and described how having such a new and interesting teammate and friend has affected the team. Since he is new and an  interesting person he has bettered the team by bringing, a German soccer influence. Since arriving, he has had a positive experience in school and explained, “[what] I like most about the school is the school spirit, that doesn’t really exist in Germany.”

Having made a handful of friends, most people are excited he is here and very accepting. Noticing the close relationship many students have with their teachers, Kuenzel explained that in Germany they do not talk about their personal lives with each other, they have a very professional relationship and the change in school society has been very refreshing. Kuenzel mentioned how TJ is a “great school with a lot of different offers,” with regards towards education and social involvement. Kuenzel’s soccer coach, Marcelino Yantas, stated that Kuenzel “has a good personality… and is very cultural,” which can and will be enhanced through the program. Exchange programs provide a unique and exciting experience in which people from all over the world are able to integrate themselves into a community and learn new things.

Only a short time into this journey, Kuenzel explained that he would love to return to colorful Colorado in the future. Unfortunately, the program must come to an end, and Kuenzel will return in June of 2016. Kuenzel has added to the positive atmosphere at TJ and has developed friendships that will last forever. Since taking part in an exchange program and coming to Denver all the way from Germany, Paul has altered the people here, as well as himself, for the better.