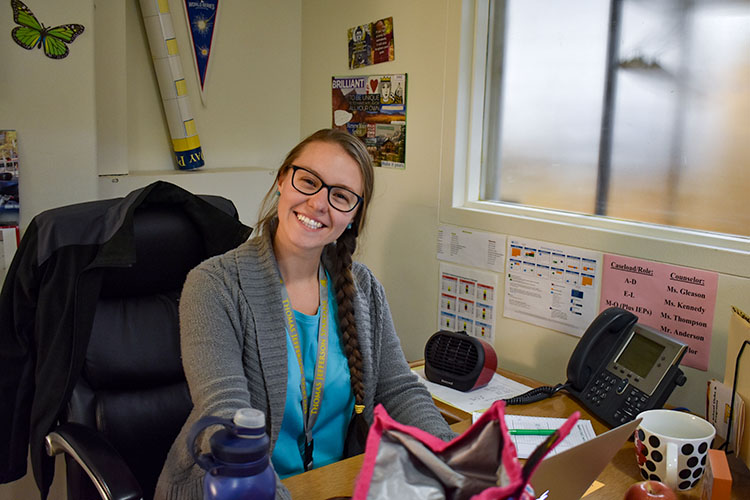 Emily Lupo's office is always open for students in hopes to open lines of communication throughout the building. photo by Atlas Zaina

This school year began with staff both old and new welcoming incoming and returning TJ students for the 2019-2020 school year. One of the new staff additions is Emily Lupo, the school’s new Restorative Justice Counselor, otherwise known as the Dean of Students. For the past 15 years, Mike Laurita has been Thomas Jefferson’s Dean; though after retiring Lupo took his place in the office. While Laurita and others will always be remembered for the time they spent as Spartans, Thomas Jefferson High School will continue to introduce more new staff members to the TJ community.

The role of a Restorative Justice Counselor has a lot of moving parts that need to be taken care of and considered. Lupo meets with students when they’re in conflict. She also works closely with students to help set up lockers and senior parking spaces or parking permits. Lupo teams up with Andrew Skari, one of TJ’s assistant principals, to resolve and prevent student to student conflict and student to staff conflict.  There has been a lot of discussion of working towards constructive conversations in hopes to prevent any further disagreements. Skari and Lupo are both very excited about this upcoming school year and finding a new way to handle disputes within a high school.

Quickly after walking into Lupo’s office, people receive a very optimistic and supportive feeling. Her upbeat and positive personality complements the calming aspects of her office. In her spare time, one can find Lupo hiking or driving in the mountains; her school breaks are spent on the road traveling. Lupo, originally from Chicago, moved to Denver about eight years ago after receiving her BA in Psychology from DePaul University. Coming into Denver, Lupo decided to go to the University of Denver for graduate school to complete her education. Since then she has been at  Merril and Kunsmiller, this year being her fifth in DPS. “I wake up in the morning and I want to come,” Lupo stated with enthusiasm, “I really love being here and I’m excited to work with everybody.”

The excitement for the new additions to TJ’s family extends to students and staff throughout the school. Skari had his fair share of dealing with conflict in the past couple of years only having one support, Laurita, compared to now with Mrs. Lupo and Mrs. Couch. “We’ve only been working together about a month but she’s been a huge help,” said Skari. He announced that having, “…another person who can have these conversations is great.”

Students also feel Lupo’s impact on TJ; although her main role is to provide a peaceful outlet, she also helps to introduce prospecting students to the high school environment, specifically TJ’s. To do this a few seniors are tasked with helping to give tours around the school, which in turn allows them to work very closely with Lupo. Senior Mary Jarecke, one of the tour ambassadors, speaks with Lupo often to help with and set up tours. Jarecke humbly stated that seniors working on school tours are, “kind of like the faces of the school for incoming families.” Within the tours, Jarecke found that it was incredibly easy to get along and form a connection with the new staff member. “Laurita kind of left an impact and those are big shoes to fill but she’s doing a really great job.” Jarecke encourages students to not disregard going to the dean to resolve issues or even just to say hello. “It’s fun working with her.”

Although saying goodbye to staff is not fun, TJ welcomed some amazing new Spartans, Lupo being one of them. Her excitement to be a part of TJ radiates through the halls and through her school spirit. Lupo attends nearly every school event with pride. As a school, people welcome Lupo with open arms and are excited for the many years to come. Skari and Jerecke hope that Lupo finds something to learn from TJ. Skari hopes she benefits from the culture that makes this school great. To Lupo, “It is the best school [she has] ever worked at, [she has]  never felt so supported.”