A New Take on the Revelry Parade 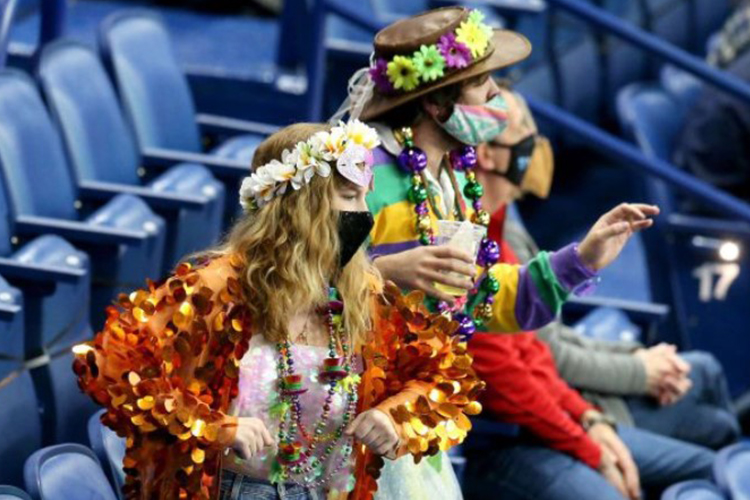 This year the Mardi Gras costumes will have masks. photo by Sean Gardner

Since America’s very first Mardi Gras in 1703, the festival has celebrated ‘Fat Tuesday’ with beautiful parades throughout the streets of New Orleans. The streets are decorated with beads, and there are special presentations of dance and song from entertainment districts such as Bourbon Street and Frenchman Street, and crowded balls are held. It is a day where vice and gluttony are the protagonists prior to lent. It is a day for sinners to enjoy their vices before they have to repent. However, in a time when social distancing is of the utmost importance, masks are a part of people’s daily lives, and crowds have high levels of spread, new guidelines had to be adapted. As one of the most anticipated festivities of the year, Mardi Gras was not going to be left behind.

“I’ve never gone, but I would love to celebrate it,” stated AJ Schiff, a junior at TJ, when it was made clear that the Mardi Gras 2021 celebration was not canceled. People wondered what the enchanting festival would look like without its traditional parades and their alluring features: the beaded and feathered, hand-made costumes of the Mardi Gras Indians, the national celebrity monarchs of the Bacchus Krewe, the double coins of the Rex Krewe, the celebrity guests and floats of the Endymion Krewe. After all, New Orleans has been known for having more than 60 different krewes participating, with even more being originated year after year.

“I want to be very clear. Mardi Gras 2021 is not canceled,” reported Beau Tidwell, the director of communications of Mayor LaToya Cantrell, to CNN. “It is going to look different. The mayor has been very consistent about saying that at every stage.”

Many answers to questions were given. On February 16th, Mardi Gras was held. Balls only received guests by invitation, some bars were open depending on capacity and schedule guidelines, and masks were required in every indoor place. Other bars sold to-go drinks. Bourbon Street and Frenchman Street districts were open to the public but followed strict state regulations. Private parties, as well as the Krewe of Rex rendezvous, were streamed online among other celebrations.

If COVID-19 taught the world anything, it is that humans are quite resilient and have come up with creative solutions in order to celebrate even in a socially distanced world. Tourists from all over the world were able to get a small taste of the extravagant and lavish celebration. From home, many were able to enjoy live streamings of the Mardi Gras as years before. There is hope that one day, the traditional celebrations of Mardi Gras will return.

“When you think about it, it was exciting to be able to enjoy the Mardi Gras from our homes in a more deep way, not only in the news or blurry pictures from the internet,” stated Schiff. “We’ll be the generation that survived a world pandemic. Not even COVID-19 could defeat us.”