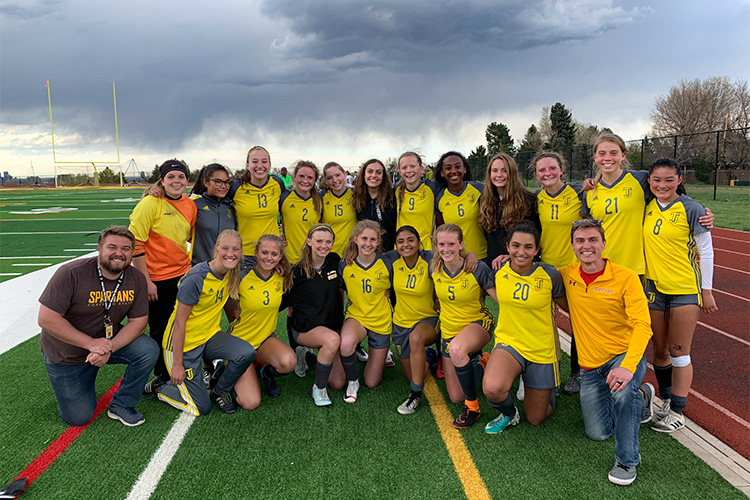 The team poses for a photo after their last game to reminisce on their season. photo by Ella Stephens

As the spring season comes to a close, the girls’ soccer team concluded with a solid record.

With a 12-3 record last season, the girls’ soccer team faced high expectations as they entered the 2019 season. Many changes occurred this season, including a revamped schedule with more difficult teams to play, as well as new coaching staff. New coaches include head coach Garien Behling, assisted by Jake Fortnum and James Stephenson. The team ended with a stable record of 7-7-1.

At the beginning of the season, the soccer team faced new changes to the roster, as well as a new coaching staff. With three seniors gone from last season, seven freshmen filled their places. These changes did not stop the girls from working harder than ever during practice, as well as giving it their all during the games. Junior, Lily Ornelas, stated, “the freshmen were great this year. They were so sweet and really made the team closer overall.” Ornelas explained how the freshmen added a fresh energy to the team that helped them become stronger as a whole. This season was also different in that the changing weather delayed the girls’ season at times. Nothing could stop them for long though, as the girls found ways to play, even if it was in the rain, mud, and even in the snow. Behling explained how, “tryouts were disrupted and practices were limited” but the coaches found ways to, “get creative,” and make drills that worked in small spaces. Behling also boasted that, “players had to find the mental fortitude to persevere when their routines were disrupted.”

The girls began the season with three out-of-league teams: Erie, Sand Creek, and Fruita Monument.  Unfortunately, the girls did not win these games, but they allowed them to get a real taste of what some harder competition is like. For the rest of the season, the girls faced some ups and downs, including losing 3-2 to rival South High School and tying against George Washington High School with a score of 1-1 for the first time in years. However, the girls were able to mercy rule, finish the game early after scoring ten goals, the Lincoln Lancers and the Far Northeast Warriors. The ladies also took home wins against other DPS schools like West, Regis Groff, Kennedy, Elizabeth, and North. Ornelas continued to explain how “[the team] overcame obstacles like difficult teams by remembering that it was not the end, and that there were more games to play. Overall it is just a game, and it is meant to be fun.” This season was definitely different than the rest and nothing came easily to them like previous years, but they overcame them by supporting each other and working harder than ever to get the outcomes they wanted.

Looking forward to next year, the girls are hoping to not only take home some of the rivalry games, but to also secure a spot into the playoffs. Ornelas continued, “next season I am looking forward to playing East and South again, and hopefully getting the outcome we deserve. I am also excited to play my last season with the girls that I have gotten so close and that I can call sisters.”

This season was a challenge unlike any other season, but it had the impact of further bonding the girls, improving their weaknesses, and increasing their passion for the game itself. Next season will surely have some surprises in store, so make sure to support the team in their future seasons.