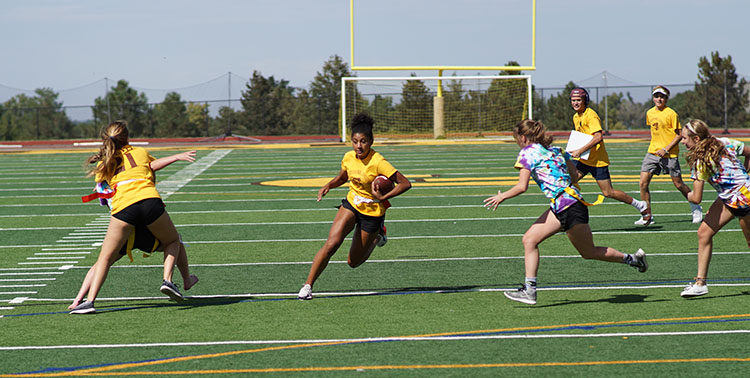 Lauren Reid helps the juniors score their amazing touchdown by gaining yards down the field. photo by Ivonne Hernandez

The Thomas Jefferson High School homecoming powder puff tradition continued as the junior and senior girls took on a competitive game of flag football. Students and staff gathered on the new turf during office hours on September 18th to watch the game. The seniors took the win with a score of 14 to 7; the juniors and seniors fought hard until the last minute of the game. The overall score showed how prepared the teams were for the game. The whole week before the game took place students and teachers were made bets and talked about who would win despite rumors that the game is typically rigged in favor of the seniors.

The seniors started the game by scoring a touchdown by Megan George very early on and showing the juniors that they were ready for the speed of the game. The senior players, coaches, and supporters all went wild on and off the field. The juniors went quiet and realized that they were going to have to step up their game to have a chance to win. Soon after the seniors scored their second touchdown by Mariah Hurd Crews, the juniors came back to prove that they were still in the game with an absurd touchdown scored by Ashlee Taylor. The senior coaches and players responded by making some incredible plays and scoring another touchdown right after the juniors made an incredible play. The juniors weren’t able to score a second touchdown but had considerable defense and didn’t let the seniors score` another touchdown. The refs made fair calls on both sides and created an equal playing ground for both.

The senior team dominated the field with Phoebe Briney, Hanna Channell, Fernanda Maurio, Morgan George, Megan George, Mariah Hurd Crews, Reece Dines, Tori Garder, Maya McChesney Loupe, Jazz Wright, Daisy Wood, Catie Aldridge, Aecha Wright and were coached by Alex Zinn, Carson Campbell, Drea Thompson, Henry Lewiston and Isaiah Wilson. The senior team came prepared with their senior sleepout t-shirts that they tie-died during office hours.  The seniors practiced for three days with their practices focused on defense, offense, and working on overall tremendous techniques. Jon Poole explained, “The senior coaches were pretty good. They had some really good plays and game plan. You have to be pretty good coaches if you can pull off the same double reverse twice, and it worked both times.” Overall, the seniors came out on top and were more prepared to win the game, but they also have played a powderpuff game before and knew what they were expecting. The girls who participated can give lots of credit to the coaches who were dedicated to helping them.