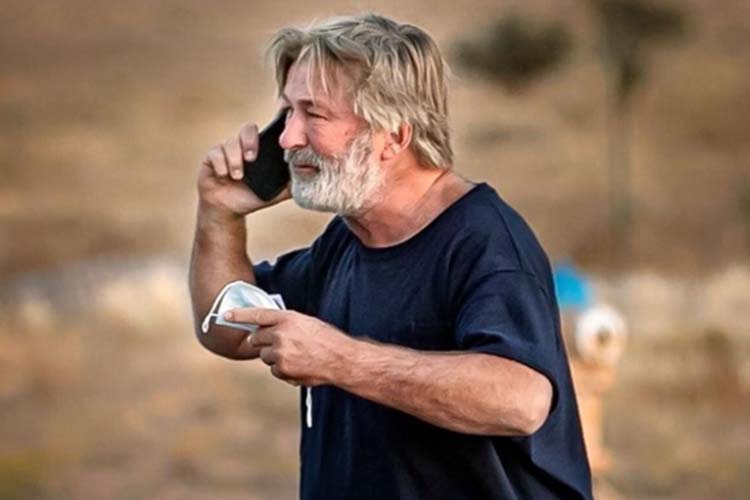 Alec Baldwin seen after being interviewed by the police the day of the tragedy. photo by Jim Weber

Alec Baldwin shot and killed a cinematographer and injured the director on the set of his new movie.

On Thursday October 21, the set of “Rust” was flooded with cop cars, ambulances, and helicopters in a frenzy. Alec Baldwin shot two people, killing one and injuring the other. This was a shock to the nation as Baldwin is well known in the entertainment business. He is an American actor, comedian, writer, film producer, political activist, and a father of seven.  Baldwin was told that the gun he was holding was a prop and was safe, but when fired, he soon figured out that the gun was loaded with live ammunition. Halyna Hutchins, age 42 and a wife and mother of one, was the cinematographer on set. Hutchins was shot in the chest and rushed to the University of New Mexico Hospital in Albuquerque where she died soon after arriving. The other victim, Joel Souza, age 48, was the film’s director. After being shot in the shoulder he was sent to Christus St. Vincent Regional Medical Center in Santa Fe and was later released.

That Friday, Baldwin tweeted, “There are no words to convey my shock and sadness regarding the tragic accident that took the life of Halyna Hutchins, a wife, mother and deeply admired colleague of ours.” Baldwin explained that he is fully cooperating with the police to figure out how this tragedy happened. So what did happen? Why was a prop gun loaded? The assistant director stated that they “did not know live rounds were in the prop-gun.” There are many safety protocols put into place when it comes to guns on set, and the gun should have gone through numerous checks before being given to Baldwin. Prop guns are generally real guns with blanks in them, and there have been injuries on various movie sets involving guns since blanks involve gunpowder. Gunpowder creates an illusion of a bullet being fired by a flame and sparks, but most injuries are minor ones such as burns to hands.

When the shot was fired, Baldwin was showing the director, Souza, and the cinematographer, Hutchins, how he was going to draw his gun and where he would point the gun for a new camera angle for a certain shot. While demonstrating, the gun went off. Los Angeles Times stated that Hutchins last words were, “That was no good. That was no good at all,” while everyone around her stood there in shock.

Serious injuries on television and movie sets have occurred before. On the set of the television series “Cover up” in 1984, the actor Jon-Erik Hexum accidentally shot himself in the head, messing around in between takes with a prop gun. There was also an accident on another movie set, “The Crow” in 1993, where Brandon Lee, son of the famous martial arts actor, Bruce Lee, was shot and killed during a scene, with once again a prop gun. In fact, Brandon Lee’s sister, Shannon Lee, tweeted that Thursday evening after the incident occurred: “Our hearts go out to the family of Halyna Hutchins and to Joel Souza.”

Safety protocols are always asked to be followed in every workplace and they are there for a reason. Mistakes happen all the time and protocols are often taken for granted or overlooked, but this mistake and disregard of the protocols took a life. Blame is being thrown around. Some even say it may have not been an accident, as problems on the set were numerous and some workers had walked out over safety issues, it is still unclear. But as of now production of “Rust ” has been suspended indefinitely.