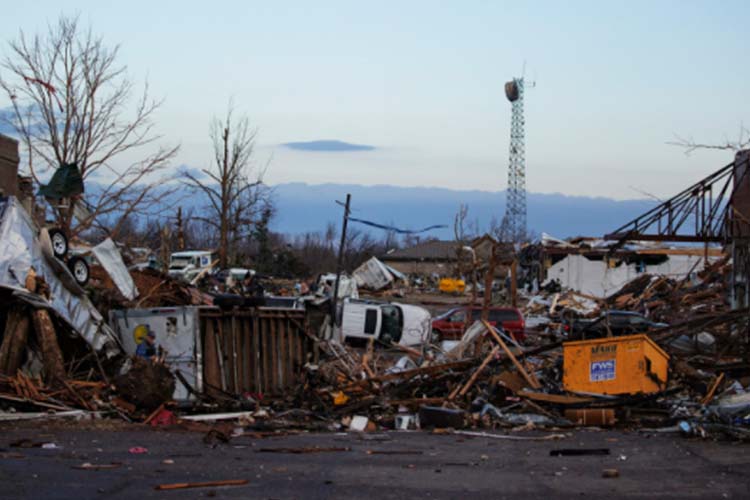 Hundreds of lives are devastated by the severe damage to their homes after a deadly outbreak of furious tornadoes. photo by People.com

Many of the southern and central states of the U.S. have been demolished by violent thunderstorms and nearly 70 tornadoes.

On December 10th, 2021, life-threatening thunderstorms and tornadoes began to rage across a large portion of the United States, causing extreme damage to the homes of civilians. These twisters had ripped through towns at dangerously high speeds, with some traveling far more than 100 miles. This extended range means that the impact of the event is fairly widespread, as it has been observed that tornadoes were reported in ten states: Alabama, Mississippi, Kentucky, Arkansas, Tennessee, Missouri, Illinois, Georgia, Indiana, and Ohio. According to the National Weather Service of the National Oceanic and Atmospheric Administration (NOAA), about 68 tornadoes occurred during those tragic days. The duration of the tornado outbreak was approximately 24 hours long, spanning through the evening of the 10th into the 11th. Multiple tornado warnings and alerts were broadcast, almost 30 minutes in advance to all nearby counties, urging bystanders to immediately seek shelter as the storms would be life threatening. Unfortunately, approximately 90 lives were lost in the chaos with hundreds facing minor to severe injuries. In regards to the cause of this catastrophe, thorough research on the sudden tornado outbreak of the abnormally furious storms has led scientists to believe the source is rooted in climate change.

Those still standing are left with nearly nothing to return to as the tornadoes had almost entirely stripped them of their homes and belongings. Luckily, some were able to recover a few of their possessions from the rummage in the aftermath. The highest speed tornadoes, reaching up to around 200 miles per hour, resulted in the most destruction to these towns. Every building was either severely damaged or torn to pieces, including those made of concrete and brick. In regards to this dreadful event, Brittany Beshear, the First Lady of the state of Kentucky, sadly stated, “These tornadoes would have marked one of the most awful days in our state’s history no matter when they struck. It’s even more painful that this tragedy happened just a few weeks before Christmas.” With about 70 deaths in her state alone, it is evident that Kentucky is one of the many states that is dealing with the devastation of the tornado outbreak. In all of the communities hit by this natural disaster, residents have exclaimed that the storm was a traumatic experience for themselves and their families. Not only did many of them have to abandon their homes in search of more suitable shelters, but a few parents bravely risked their lives for their beloved children, while others faced the challenge of losing their children in the midst of the chaos. These deadly storms and twisters have put an enormous emotional and physical toll on the residents of these central and southern states. These citizens are grateful to have lived through such an event and survived to tell the tale.

Although there are a multitude of factors that played a role in the increasing severity of these weather events, scientists have confirmed that global warming is the primary cause. As the planet continues to get warmer due to the high combustion of fossil fuels, global temperatures have reached higher than ever. The Gulf of Mexico is at unprecedented high temperatures with water temperatures being one to five degrees above the average for this time of year. This means that there is more heat and moisture present, producing the turbulent energy that creates thunderstorms. Additionally, the record high temperatures of the central and southern U.S. have been seen to mix with the cold blasts approaching from the western part of the country. This combination of contrasting temperatures is known to lead to chaotic storms, such as the ones from December 10th-11th.

The violent thunderstorms and raging tornadoes of this December catastrophe have not only created loss and trauma for the innocent communities of these states, but they have also brought national attention to the predicament of climate change, and how it will continue to tragically impact the well being of our planet. These weather phenomena are now irreversible and will merely worsen if humans continue to pollute the planet with the deadly greenhouse gasses that are released into the atmosphere every day. Despite the overwhelming gloom from the events, governments and authorities have arranged resources to assist in and contribute to the recovery of these communities. Rescue teams have been arranged to seek out missing individuals, disaster relief is going to compensate families and businesses, and people are coming together to clean up the mess that was left behind. All of these factors, if so pursued, will allow local residents to rebuild their lives with the help of their friends, families, and government authorities. It is sorrowful to see the lives of these people torn apart by such devastation with loved ones dead or injured, homes destroyed, and belongings lost. These civilians faced a tragic end to their year.