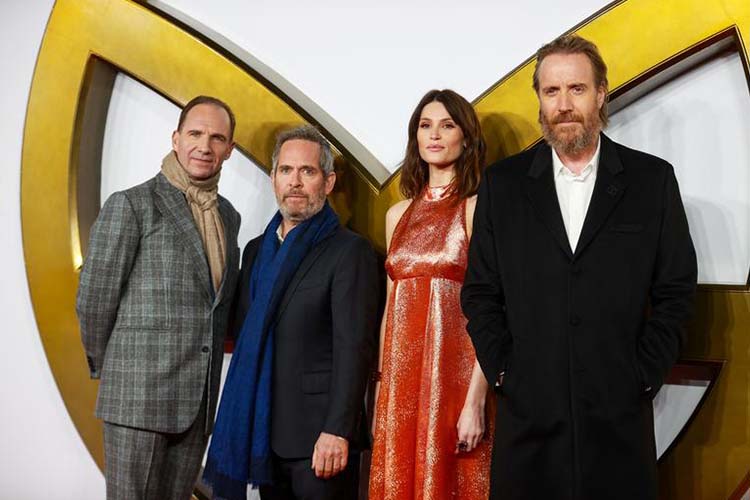 Some of the cast members at the premiere of their new movie. photo by Hannah McKay

The new movie of the Kingsman series is now in theaters!

On December 22, 2021, the new movie The King’s Man was released; two weeks later, my family and I went to see it in the theaters. I walked into the theater with a smile on my face, and I came out with an even bigger one. My entire family has watched the two previous movies in this mini-series, so the third installment of The King’s Man was highly anticipated. The King’s Man is the third movie of the series and is the origin story for the two other Kingsman movies: Kingsman: The Secret Service and Kingsman: The Golden Circle. The other two movies were very well done, and it had a lot to live up to as the third movie in the series. The reviews were a little shaky, with a 75% on rotten tomatoes, and  it was also released around the same time as other highly anticipated movies such as the new “Spider-Man: No way Home” and the new “Matrix Resurrection” movie.  However, for me it was still at the top of my list, after Tom Holland and Spiderman, of course.

The King’s Man movie is a 131-minute movie filled with action and comedy directed by Matthew Vaughn that takes place in the early 1900s. The movie starts with the Duke of Oxford, his wife, and son, Conrad, visiting a concentration camp in South Africa where the wife is tragically shot and killed. The movie then flashes forward twelve years where Conrad is almost an adult who is not allowed to go out and experience the world because his father, scared by his wife’s death, will not let him out of his protection. In the movie, Europe is on the brink of World War I. Conrad loves and respects his father greatly, they have a close bond, but Conrad wants to follow in his father’s footsteps and join the army. His father is against him joining and forbids it. Conrad believes his father to be completely against violence and does not want to be involved at all in a war, but little does Conrad know, his father does the government’s so-called “dirty work” and has his own spy operation, started by him, his right-hand man, Shola, and his feisty maid, Polly. This spy operation has hundreds of individuals around the world as house servants, office administrators, and other odd jobs in the ranks of many important and influential people helping to inform Polly, the brains of the operation. The Duke and his fellow peers are working to stop the war, which they see as having the possibility of being catastrophic.

The movie stars Harris Dickinson as Conrad, Gemma Arterton as Polly, Djimon Hounsou as Shola, and Ralph Fiennes as the Duke of Oxford. Dickinson is a 25-year-old upcoming actor who did a wonderful job portraying Conrad. I am sure we will see Dickson in many more films to come. Fiennes, who portrayed the Duke, is a well-known actor. He has been nominated for and has won many awards, including two Academy Award nominations for his performance in the famous drama Schindler’s List. Arterton was in the first Kingsman movie, Kingsman: The Secret Service, and has been in many other movies, such as Hansel and Gretel: Witch Hunters. Housou did a great job portraying Shola and has been seen in many other well-known movies, such as Blood Diamond, Guardians of the Galaxy, and Gladiator. These actors and actresses do a fantastic job of portraying these characters and making the audience feel connected to each one of them.

The King’s Man made me laugh, cry, and even provided a little history lesson or at least did a good job of reiterating what most of us learned in our history classes. The movie was based around the true events that happened in history but did take a liberal view or put its own twist on them. For instance, the Zimmerman Telegram was one of those events; in the movie, the audience was led to believe that Polly, the brain of the Kingsman operation, was the one who cracked the code.

My family and I join many fans who are excited to hear that the Kingsman series will continue with the release of another movie during Christmas 2023. Hopefully, we will be able​ to see some more of these beloved characters in the next movie.