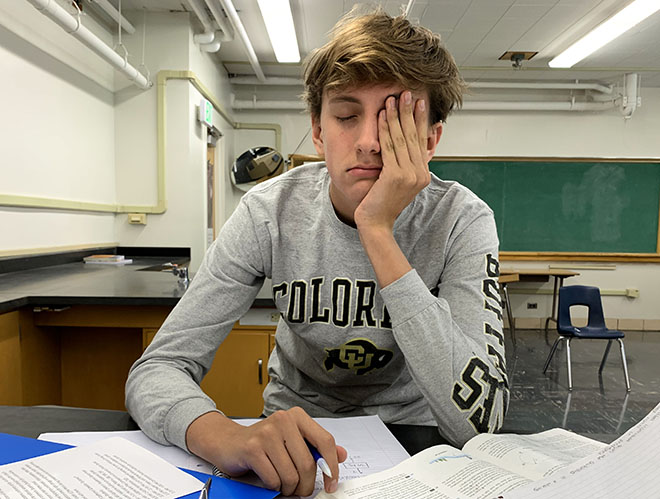 Junior Isaac Whistler studies for his different classes, but is having a hard time focusing. photo by Caitlin Beery

Teens running on less than optimal amounts of sleep causes many unproductive behaviors.

Sleep is a biological necessity, a fact that is oftentimes neglected. Many student schedules don’t allow them to make the investment of sleeping for a full eight hours. Often, teens run on four to six hours of sleep due to their after school activities and early school start times. Sleep deprivation occurs when an individual receives fewer than six hours of sleep for about two or more weeks. Students often surpass that benchmark. They prioritize school, sports, phones, and clubs over their sleep which causes major health problems throughout the body. Busy schedules are not the only factor to blame. The teenage brain doesn’t release melatonin (a hormone related to sleep) until eleven o’clock at night. This causes bedtimes to be pushed back significantly despite the earlier start times of school.

To combat sleepy teens, many districts, such as Cherry Creek, have decided to make start times later for high school students. The later start times put release time of school to later in the afternoon. Many factors, including practice times for sports and student jobs, have kept many districts from not changing their start times. In the meantime, many students are still running on an unsustainable six hours of sleep and are causing unknown harm to themselves. There are physical and mental implications for depriving the teenage mind and body of sleep.

Lack of sleep causes known distractions in the classroom. Students can experience a lapse in focus and concentration. They are more likely to sleep during class and miss valuable information and instruction time. For freshmen, the adjustment from middle school to high school can cause them to become sleep deprived. Freshman Kate Jordan Little, explained, “While in class, I won’t pronounce words right or I’ll be reading something and I can’t comprehend the information in the text.” Also, a lack of concentration can be easily seen in driving behavior. Teens who just received their licenses are 3.7 times more likely to get into a car accident, and the 17-19 year-olds aren’t too far behind them. The easily distracted minds of sleep-deprived teen drivers are more likely to not focus on the road and find themselves in dangerous and even deadly situations.

Student performance in both athletically and academically is directly related to the amount of sleep a person gets each night. Performance in school has shown to decrease when the students don’t receive an adequate amount of sleep, affecting test scores and grades. On the athletic side, Minnesota Sleep Society reports that athletes who received fewer than eight hours of sleep are 1.7 times more likely to get injured compared to those who received eight or more hours of sleep. Trying to find a balance between schoolwork and sports can be difficult. Little expressed, “There is not enough time for homework, practice, and sleep.” Students in this dilemma often neglect sleep in order to keep up with the demands of school and sports.

Teens who are sleep deprived are at a higher risk for obesity and diabetes. When the mind receives less than the recommended amount of sleep, it reduces the production of a hormone called leptin, which tells the brain to stop eating, while it increases a hormone called ghrelin, an appetite-inducing protein. The switch in these two hormones can cause excessive eating when an individual is tired. This increase in eating is met with a decrease in exercise due to fatigue. Sleep deprivation also causes the body to release higher levels of insulin, a hormone that controls blood sugar levels, which causes an increase in fat storage and the risk of type two diabetes.

Changes in mood are some of the most notable symptoms of sleep deprivation. Lack of sleep has been the main factor to blame for the quick-tempered emotions of individuals, but lack of sleep has also been known to increase one’s level of anxiety and depression. A person can become more lazy and irritable, resulting in the stereotype of a moody teenager. Sleep deprivation can easily explain most of the symptoms of being a teen.

A common way people combat the exhaustion that comes with sleep deprivation is by drinking coffee or energy drinks. Caffeine may give sleepy teens a boost in the morning but it can prevent teens from sleeping that night. After drinking coffee or energy drinks, people may feel anxious, shaky, have stomach pains, have the inability to focus, and the inability to sit still. Many believe that all of the symptoms end there, but that is not the case. When too much caffeine is ingested, trying to sleep at night becomes very difficult, causing restlessness and insomnia. Very Well Health reports that for every ten milligrams of caffeine a teenage boy consumes, his ability to get a full eight and a half hours of sleep decreases by 12 percent. To put that statistic into perspective, a grande iced caramel macchiato from Starbucks has about 150 mg of caffeine. Medical News Today reports that many teens consume as much as 60-800 mg of caffeine per day, inhibiting their abilities to get a full night’s rest.

Sleep, a biological necessity, is crucial to the daily performance of students. Sleeping for the recommended amount of time will not only increase test scores and athletic performance but also make for happier and healthier teens.