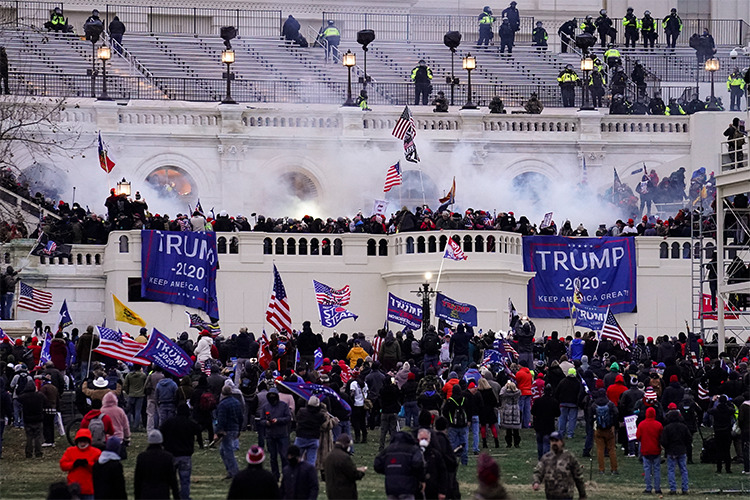 Trials continue in the capital to find rioters and people involved in the attack against the Capitol. photo by John Minchillo

New information has been exposed after investigations about the January 6th Insurrection by the Select Committee.

For many Americans, the events of the attack on the United States Capitol on January 6, 2021, demonstrated an attack on democracy and the peaceful transfer of power. The U.S has managed peaceful transfers of power throughout its over two centuries-long histories. But in the days leading up to the November 3rd, 2020 election, civil unrest in the United States was escalating. During former President Donald Trump’s 2016-2020 presidency, he amassed a loyal following. His followers continued to support him even when he neared the end of his presidential term when he faced a pending impeachment trial due to accusations of presidential misconduct. Having only been the third president to be impeached, Trump would make history again by being impeached a second time on January 13, 2021, for “inciting violence against the government of the United States.”

The attacks were inspired mainly by what many Democrats and Republicans call the ‘Big Lie.’ As defined by politicians and journalists following the 2020 election, the ‘Big Lie’ is the idea that Joe Biden was elected as President due to voter fraud. In the weeks leading up to the 2021 election, former President Trump was confident that he would win the election. When the votes were counted, and Biden was elected as President of the United States, Trump continued to deny the election’s legitimacy. After the insurrection, Trump continued to discredit the election results during a rally on October 9th, 2021, in Des Moines, Iowa. During this rally, former President Trump continued to unleash countless false claims about findings of voter fraud in the 2020 election.

Trump’s claim was based on alleged intelligence that there had been an audit of Trump’s votes not counted or intentionally misplaced for Biden to secure victories in swing states. All claims of voter misconduct were dispelled by an investigation led by the Associated Press (AP). According to a nationally used bias checker, AllSides, “The Associated Press’s general coverage of news and world events has a Center media bias, though close to Lean Left.” The AP’s political bias analysis falls in line with the AP’s mission to be a  “source of fast, accurate, unbiased news in all formats.”

In the AP’s efforts to find out if there was potential voter fraud, as Trump alleged, they went to six states that Trump insisted he should have won. Through exhaustive fieldwork done by these journalists, they were able to find 475 potential instances of voter fraud. The lead director of these investigations, Christina Cassidy, stressed in an interview with Public Broadcasting Services that “would not have made a difference in the outcome of the 2020 presidential election with all indications of voter fraud.” The data collected by journalists at the AP was only one instance of intense recounting and safety measures that disproved that the 2020 election was stolen from Trump. However, nearly two-thirds of Republicans and one-third of all voters continue to believe this theory.

Supporters who believed the misinformation spread by Trump claimed that the presidential election had been fraudulent as an attack on American democracy. In the weeks after the election, he spread slogans throughout his base to perpetuate the misinformation. He insisted that his supporters had to “stop the steal” and “if you don’t fight like hell, you’re not going to have a country anymore.” Ultimately, groups of people, who were encouraged to make an effort to overturn the 2020 election, stormed the Capitol.

In the most extensive federal investigation of a domestic attack in U.S history, “The Select Committee of the January 6th Insurrection” found countless evidence of online plans. These plans were detailed and specific for direct infiltration of the Capitol. It was shocking to many American citizens that these blatant and easily accessible plans to stage a coup on the Capital were ignored by government intelligence. In a hearing by the Select Committee, a member of the capitol police, Officer Dunn, testified that he received a screenshot from a friend that detailed a plan to attack the capitol found online. Dunn dismissed the warning because it was supposed to have come from his sergeants if it was creditable. In neglecting to inform police officials of an attack on the Capitol, the Capitol police were forced to put their lives in danger to fight against armed and violent terrorists.

The Federal Bureau of Intelligence was questioned by the Committee and is taking actions now to limit how domestic terrorists can communicate and participate on social media platforms such as Facebook, Instagram, and Twitter. The Select Committee members interviewed countless officers but sought testimony from five officers at the building that day. It had been widely believed that the domestic terrorists who stormed the capital were unarmed, but that is far from the truth. In the testimony provided by Officer Fannon, he told the committee that they had countless weapons and household objects that they used to harm the police. The investigations by the Committee also seek to bring legal discipline to all persons who stormed the Capital. As of March 10th, 2021, over 786 people have been charged with treasonous charges. The investigation has been aided by the countless videos and social media posts taken mainly by the invaders themselves.